Adrian Holmes was born on 31st March in 1974 in Wrexham, North Wales. He moved to Vancouver, British Columbia when he was merely five years old. He attended Langara College, where he studied nursing to please his mother, who believed he should look for a backup just in case, his acting career does not go as desired.

V-Wars is a science fiction horror series based on the comics by Jonathan Maberry. The story revolves around a scientist and his best friend in their attempt to tackle a fatal outbreak. The crisis escalates quickly into a potential war between humans and vampires in the future.

The series premieres on 5th December 2019.

Adrian Holmes is married to his wife, Caroline Chikezie 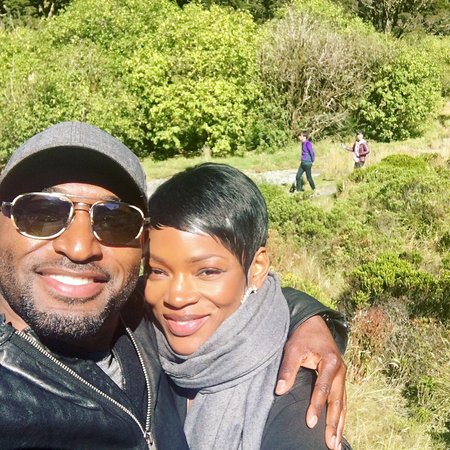 Adrian Holmes tied the knot with his actress wife Caroline Chikezie, best known for the action-fantasy film Eragon (2006). Although the couple hasn't revealed the details of their wedding, their social media activity suggests they're married for at least a few years now.

The couple leaves no shortage of effort to shower love for one another. On Valentine's Day 2019, Adrian took to Instagram to express the love for his partner with a couple of adorable pictures. He wrote,

At my highs you help me fly even higher and at my lows you find my wings. You bring my life to life and I love and adore you for that. Happy Valentines Day Boo ?, @carolinechikezie.

Likewise, Caroline followed suit and shared the images of the duo with a sweet caption of her own. She wrote,

Gosh, I bloody love doing life with you @adrianholmes ??❤️
Happy Valentine’s Day ?? P.S. Thanks for always letting me lean on you, literally and figuratively (3rd pic) ?

This wonderful husband and wife pair who loves traveling to exotic locations is yet to welcome children into their life.

Adrian Holmes’ career in a nutshell - What is his net worth? Holmes boasts an impressive net worth from his successful career.
Source: Adrian Instagram

Adrian Holmes has had over 100 small-screen credits to his name, most notably Arrow playing the role of Frank Pike and as Federal Agent Landecker in the comedy series Impastor. One of his favorite roles is the portrayal of Basqat / Griff in the CW series Smallville.

Holmes is particularly proud of his central role of Errol Barrow in the docudrama Barrow: Freedom Fighter (2016). The documentary tells a brilliant story of the first prime minister of Barbados, Errol Barrow. Since his election in 1966, he fought for the freedom and equality of his people. Moreover, he looked to provide education for all citizens.

One of Adrian’s major highlights was the leading character of Nick Barron on the Bravo series 19-2. In 2017, he won Canada’s most impressive honor with the Canadian Screen Award (CSA) in the category of the best male lead in the drama series. The show, too, won the Best Drama at the CAS; moreover, it was nominated for the 2016 Emmys for the best drama.

In 2018, the actor starred alongside Dwayne Johnson in the action film Skyscrapper (2018).

Adrian Holmes' net worth is estimated to be $4.5 million.