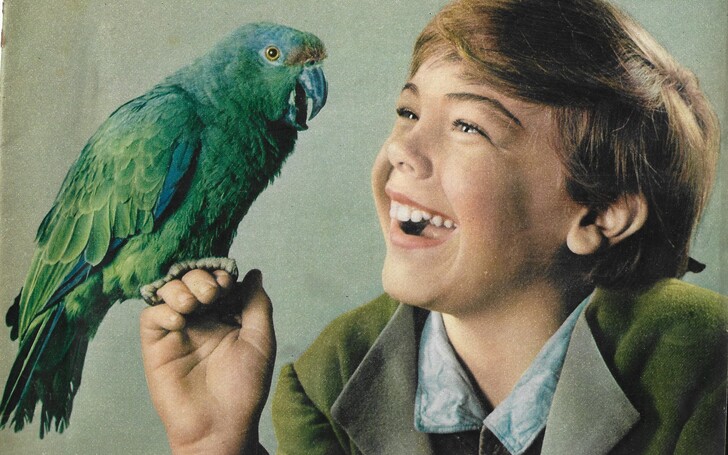 Bobby Driscoll (full name Robert Cletus Driscoll), born on March 3, 1937, was a child actor and artist. He passed away at the age of 31 on March 30, 1968. Driscoll is well renowned for his impressive contributions to big and small screens for 17 years from 1943 to 1960.

Born in Cedar Rapids, Iowa, the only offspring of his father, Cletus Driscoll (1901-1969), an insulation salesman, and his mother, Isabelle Kratz Driscoll (1904-1981), a former schoolteacher, Bobby moved with his parents to Des Moines, Iowa, where the entire family stayed until 1943. They later shifted to Los Angeles when a doctor recommended Bobby's father to relocate to California since he was diagnosed with work-related handling of asbestos.

Driscoll's parents received encouragement to get Bobby into the movie industry. Their barber had a son, an actor, who helped Bobby land an audition at MGM for a significant role in Roy Royalnd's family drama Lost Angel starring Margaret O'Brien.

While auditioning for the part, the 5-year-old Driscoll noticed a mock-up ship in the studio lot and subsequently inquired why there isn't any water. The director was left impressed by the young boy's intelligence and curiosity and gave him the role as he came out on top over 40 candidates.

Driscoll was best known as the voice of (and model for) Peter Pan, as well as roles in So Dear to My Heart, Treasure Island, and Song of the South.

He was a wonderful and talented young actor who left us far too soon. pic.twitter.com/7AvppphUKm

Bobby Driscoll appeared in some of the most famous live-action films of the time from the Walt Disney Studios. These included live-action/animated musical Song of the South (1946), feature film So Dear to My Heart (1949), and live-action adventure Treasure Island (1950).

Driscoll was the animation model and lent the voice for the titular character in animated musical fantasy adventure-drama Peter Pan (1953), one of his most famous roles to date. In 1950, the young actor landed the Acamedy Juveline Award for his impressive performances on So Dear to My Heart (1949) and The Window (1949).

From the mid-1950s onwards, Bobby's career as an actor started to decline, and he began to appear as guests on anthology series. He later turned into a heroin abuser and was sentenced to prison for illegal substance use. His interest centered on the avant-garde art scene following his release.

Bobby died in a deserted house in 1968, soon after his 31st birthday, in poor health because of his drug misuse, along with his dwindling funds.

Rise of His Stardom as a Child Followed by Unprecedented Fall 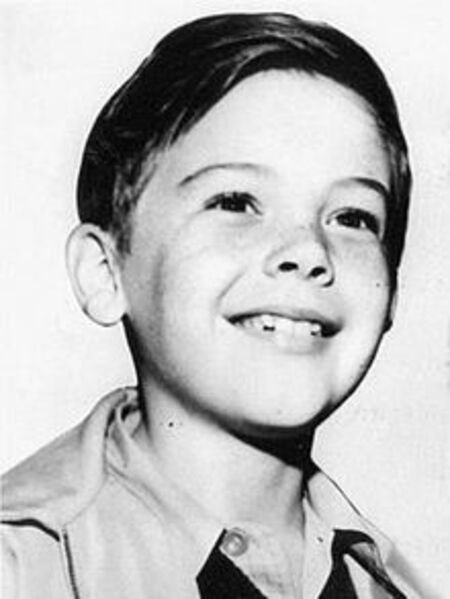 Bobby Driscoll was a naturally talented actor, born with the gift of owning the stage. Discovered accidentally in a barbershop in Altadena, CA, at the age of five and a half, he managed to captivate the audience with everything he ever did on the screen and on television during his 17-year career (1943-1960).

The actor earned his Hollywood Star on 1560 Vine Street for his appearance as Jim Hawkins on Walt Disney's Treasure Island (1950), and four years later, in 1954, he came out victorious in the national poll for a Milky Way Gold Star Award.

Yet all the more heartbreaking, after extreme acne had derailed his acting career at 16, was Bobby's fruitless quest to find a spot in a remorseless society. His last major movie success, before his appearance was no longer cute and his speech was not clear enough to be used for voice-over work, was the character of animated Peter Pan (1953).

After his deal with the Disney company was terminated abruptly soon after Peter Pan's release in late March 1953, his mother also withdrew him from the talent-supporting Hollywood Professional School.

Beginning of a New Life

In his new life at the public Westwood University High School, where he graduated in 1955, Driscoll's previous stardom all of a sudden was more of a liability than rewarding.

The actor continued to perform successfully on television until 1957 and even managed to secure two final screen roles on The Scarlet Coat (1955) and The Party Crashers (1958). In the latter film, he starred alongside Mark Damon and Connie Stevens.

Bobby Driscoll (voice of Peter Pan) fell into drug addiction when his acting career failed. In 1968, two boys discovered his decaying corpse on a cot after playing in a deserted part of Manhattan’s underground. Near his body were two beer bottles and numerous religious pamphlets. pic.twitter.com/pUVTLKY6qh

The actor's life was gradually a roller coaster experience that involved multiple run-ins with the law, and his subsequent conviction in October 1961 as a drug abuser came as hardly a shock.

Released in early 1962, rehabilitated and ready to make a return, regardless of his past as a criminal and convicted drug addict, Bobby was overlooked by the same community that had once supported and nourished him.

Now You're Just Somebody That We Used to Know?

First famous... now a nobody. After his parole ended in 1964, in the expectation of reviving his career on theatre, he finally returned to New York, only to find that his legacy had failed him, so nobody wished to recruit him there either.

The actor subsequently vanished into the shadows, completely demoralized with neither money nor fame.

A Lonely and Tragic Death

On March 30, 1969, two playing kids discovered Bobby's dead body in a deserted East Village building. He was supposedly a homeless person and remained unclaimed and later buried on Hart Island, where he rests in an unmarked pauper's grave. He is commemorated at Eternal Hills Memorial Park in Oceanside, California, on his father's gravestone.

Bobby Driscoll's Romantic Life - Did He Share Any Children?

The actor used to be a married man and shared three children in total. Like his career, this part of his life was just as tragically eventful. Bobby Driscoll was officially married to his wife, Marilyn Jean Rush, for three years from 1957 to 1960.
Source: Pinterest

On December 3, 1956, Bobby and his long-time girlfriend, Marilyn Jean Rush eloped in Mexico City to escape their parents who objected to their union. However, their wedding was subsequently dissolved (not officially recognized), and they remained apart for a few months. Later, the couple exchanged vows at a ceremony in Los Angeles held on March 8, 1957.

Following the wedding, the actor moved to Santa Monica and started working as a clerk in the Pacific Palisades barracks to finance his marriage. Sometime in August, Bobby had his first child, a son, who was the first of three children for this married couple. A year later, he welcomed his second child, a daughter in 1958.

In October 1959, Bobby was convicted on charges of narcotics but was later declared not guilty. A few months later, the day after Bobby's 23rd birthday, his third child and second daughter, was born. The same year in 1960, Bobby separated from his spouse Marilyn, resulting in a divorce later in the year.

Venture into Crime with New Girlfriend Sometime in 1961, Bobby moved to Topanga Canyon, where the former actor and his girlfriend Suzanne Stansbury were arrested for stealing money from an animal clinic. Due to the lack of clear evidence, the burglary charges against Bobby were dropped.

A month later, Bobby was arrested for creating a fake $45 cheque, for which he pleaded guilty. Bobby was arrested for the third time the following month over the possession of opioids. In October 1961, Bobby was referred to the psychiatric court and subsequently admitted to a rehab center in Chino for six months before getting released in April 1962.

Towards the end of 1963, Bobby met Sharon "Didi" Morrill, and their relationship took off in an instant. After dating for a while, the couple soon embraced each other as husband and wife. The wedding was held at Zack Walsh's home; however, the marriage failed to be legal since the paperwork was never filed.

Later, Bobby and Didi relocated to Beverly Glen, and the couple began to smuggle cocaine into New York City. After going into hiding in Canada, Didi returned to Los Angeles, while Bobby went to New York. By the end of 1967, Driscoll broke up with Didi. From there on, his life turned into a shocking mess with neither fame nor money on his account. In fact, he did not have his health either as he was diagnosed with hepatitis following persistent substance abuse.

Died Unidentified at the Age of 31; Death was Reported 3 Years Later On March 30, 1968, Bobby Driscoll died alone in an abandoned East Village tenement. Two kids discovered his body lying on a cot, dispersed to the ground with two empty beer bottles and religious brochures. The medical report revealed he had suffered from heart failure caused by severe stiffening of the arteries due to his prolonged substance abuse.

The corpse failed to be identified, even with pictures shown around the neighborhood. Once Driscoll's corpse went uncollected, he was placed in an abandoned pauper's grave in New York City's Potter's Field on Hart Island.

Nineteen months after his demise, Driscoll's mother sought the support of Disney Studio officials to reach Bobby for a potential reunion with his dying father. This culminated in a fingerprint match at the New York City Police Department, who informed her the actor is buried at Hart Island.

While his name exists on the gravestone of his father in Oceanside, California's Everlasting Hills Memorial Park, it is a cenotaph, as his ashes are now buried on Hart Island. Driscoll's death was not announced until his first Disney film, Song of the South, was re-released in 1971. That's when reporters looked into the whereabouts of the main cast, and his mother revealed the tragic news.