Calling the internet a weird place would be a massive understatement. Quite often, rumors seem to appear out of nowhere on social media. Some ridiculous, some funny, and some that make your heart skip a beat.

Celine Dion is one personality who needs no introduction. The legendary singer was, unfortunately, a part of the death hoax, leaving fans extremely worried. Worry not, she is alive and well. But let's look at the details of what actually happened.

On 6th November 2019, rumors spread like wildfire claiming the 'My Heart Will Go On' singer had passed away.

A website that is merely four days old called 'worldnews.hytactv' claimed the music star bit the dust in a plane crash. The news is false, as confirmed by Dion's talent agency.

Apparently, the fake news site altered a CNN New Day Program, making it seem like the cable channel broke the news, when, in reality, they never did.

The headline read, "Superstar and singing legend Celine Dion dead at 51," which was shared hundreds of times on social media, in particular, Facebook. 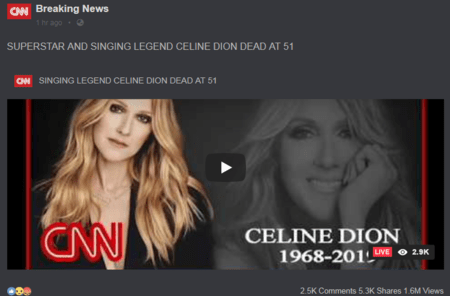 AFP Fact Checker confirmed the report is a ruse, and there is nothing to be worried about. Dion's talent agency told AFP, the news "is absolutely false."

The original video used in the death report is the news confirming US chef Anthony Bourdain had passed away on 8th June 2018. You can check out the clip here.

Interestingly, there's another video from 18th November 2013 claiming Dion died in a plane crash. The singer is clearly not new to being targeted for a death hoax.

While a part of the internet believed she died, the Canadian pop star in the meantime was busy on her world tour she plans to perform till September 2020.

On 5th November 2019, Celine shared a picture on Twitter of her concert at Michigan's Little Ceasars Arena.

The website claiming Dion is no more was created on 2nd November 2019. Needless to say, the site couldn't be any less credible.

How did the fans react?

As soon as the hoax of her plane crash hit social media, fans couldn't help panic. Some genuinely bought it and were terribly sad while others were smart enough to notice something fishy going on. Let's check out some of the fans' reactions.

Well those panicking because they believe her death hoax today can rest easy now because @celinedion is currently on stage slaying it and belting out #ImAlive . Fitting don’t you think. #QueenCeline 👑💃👠🎤🎼

Today is a good day because Celine Dion never died.

My mom saw a fake Facebook post that Celine Dion died in a plane crash and the first thing she said was “what??? I’m supposed to see her in concert next week!”

Many of us still dont understand the purpose of life, one shines one day and withers away the other day. She was just 51 and many people woke up this morning hearing the sad news that Celine is dead. She died in a private plane crash. Rest in Peace... https://t.co/NlVA498kJ0

My aunt called me yesterday to ask if an article she saw on Facebook that said Celine Dion had died was true and I haven’t been the same since.

The "I'm Alive" hitmaker, Celine Dion is alive despite a hoax circulated briefly on social media yesterday claiming the singer had died in a plane crash. pic.twitter.com/eYa76hywDF

Verify before you amplify!!!

Celine Dion is not DEAD
She did not die in a plane crash.