For someone so young, being recognized is not the primary goal; though social media culture’s taken over society, teenagers are rarely known for their body of work. But in the case of Gregory Kasyan, being famous at a pretty young is the reality, he is only 18 years old and currently boasts over 250k and growing Instagram followers and a list of credits any aspiring actor would be proud of. The reason for his worldwide fame is the Netflix show Daybreak and the character of Eli Cardashyan, who most probably won’t be returning for Daybreak season 2.

Gregory was born on 12 April 2001 in the United States and lived in Glendale, Los Angeles most of his life with his father and mother. His parents were not exactly rich, and they were hoping to give Gregory a good life while also helping him build for a future where he could be a contributing member of society. Coming from a middle-class family, there are a lot of limited options for a person to build the foundation at an early age. But there was something Gregory always wanted to do, and it was acting. Though the choice may not be ideal, it was something he wanted, so his parents supported him through it all, and in the end, it paid off as the actor is making money acting while also earning some name and fame through his job.

Gregory Kasyan was Five Years Old When He decided to be an Actor; His Parents Helped Gregory Kasyan grew up in Los Angeles with his parents.
Source: Instagram

Gregory was not from a well off family, and from a young age, he knew he was going to work hard for everything in life. His parents instilled good manners on the actor, and Gregory decided he wanted to utilize his talent and love for acting as a career. So, as weird as it sounds, the actor wanted to be an actor since the age of five, and when he was seven years old, the young actor earned his first role in the show The Middle.

The actor appeared in two episodes, and then his career soon took flight as the actor used his parents to travel from one audition to the other and appeared in multiple other movies and TV shows. Though the decision to go into acting at the age of five may be seen as a little hasty, the career he’s built almost a decade and a half later is a testament to the determination and resilience of the actor.

Booking the Role of 'Eli Cardashyan' in the Netflix Show 'Daybreak' Daybreak is a post-apocalyptic comedy/drama show where a nuclear blast wipes out the adult population of the earth, and those who survive are either cannibals or flesh-eating zombie-like creatures. The nuclear blast, however, did not affect teenagers who are now left to inherit what remains of the earth.

With no adults to supervise, the teenagers go wild, and we are shown just the impact on the town of Glendale, located in California, where the students of the Glendale school form clans to survive and terrorize others. But Eli does not fall in any particular character of the surviving children of Glendale, he is his own man and starts living in the mall with his puppet girlfriend, Mavis. Eli Cardashyan and Mavis were in a relationship.
Source: Instagram

Eli is a bullied kid in high school who was teased for his tendency always to wear knock-off clothes and shoes and talking trash about each and every of the school in the most colorful of languages. Eli took residence inside the mall after the blast and booby-trapped the entire place in order to not allow anyone inside the place.

But in the first episode of the series, Eli dressed as Baron Triumph, allows Josh, played by Colin Ford, Angelica, played by Alyvia Alyn Lind and Wesley Fists, played by Austin Crute into the mall to save them from the real Baron.

Watch: The trailer for the first season of Daybreak featuring Gregory Kasyan as Eli Cardashyan

The relationship between the ragtag “save-Samaira (played by Sophie Simnett)” crew and Eli is contentious at best as they divide the mall among themselves, much to the anger of Eli, who lets them know in his own off-brand colorful language.

But as the series progresses, Eli not only becomes the comic relief of the show, but he also shows some growth as a character of the larger story. He was definitely one of the favorites of the fans of the first season of Daybreak.

Will Gregory Kasyan’s Character 'Eli Cardashyan' be back in 'Daybreak' Season 2? (Spoilers for Season 1)

At the end of the ninth episode of the first season of Daybreak, Eli and Josh are finally bonding as they show appreciation for one another. Eli is trying to help Josh get inside the school, where he will be able to see Sam again for the first time since the bombs went off.

In order to help Josh, Eli uses the Baron’s costume to maybe get inside the compound. But while Josh and Eli are bonding over Pokemon, Jaden Hoyles comes out of nowhere and stabs Eli, thinking he was Baron. He then slowly dies right in front of the eyes of Josh, who is trying to comfort him by holding Eli in his arms.

Eli dies in the episode, and it seems he will not be back for the future episodes of the show. There is no confirmation to this point when it comes to the renewal of Daybreak for a second season. Netflix is taking its time to cancel or greenlight the show, but considering the ever-growing fan base of the show, it won’t be a surprise when Daybreak season 2 is greenlit.

The first major role of Gregory’s career was on the show The Middle, and though the actor went through a lot of rejections over the years he was able to get a limited role in shows like Hawaii Five-O, NCIS: New Orleans and played the younger version of Harry Bosch in the Amazon Prime show Bosch.

Gregory also appeared in the movie Miss India America and then played the younger version of Jonah Hill’s character in the show War Dogs. But his first starring role came in the indie movie Quest: The Truth Always Rises. The movie started filming when the actor was only 13 years old, and when the movie was released, the actor was 16, and the experience he gained on the set of the film was a valuable one.

But out of all the starring roles and guest appearances, the role fans know the actor most by is as Eli from Daybreak. Gregory Kasyan with a little version of Eli Cardashyan in Daybreak.
Source: Instagram

The actor is handsome, with a sense of humor and young, which means there are probably no shortages of ladies coming Gregory’s way. But even with all the attention, the actor still appears to be single.

But as the actor said in an interview with Schon, “If I can give myself advice for a year from now, it would be just to stay humble and keep working hard,” it seems the actor is focused on furthering his career. After only turning 18 years old this year, he seems to be focused on his career with no distraction in the form of a girlfriend in his life.

There is plenty of time to fall in love and get married in the future, but acting career fame and success window only open for so long. So, Gregory Kasyan is currently single, getting ready for an exciting career ahead.

What is the Net Worth of Gregory Kasuyan? 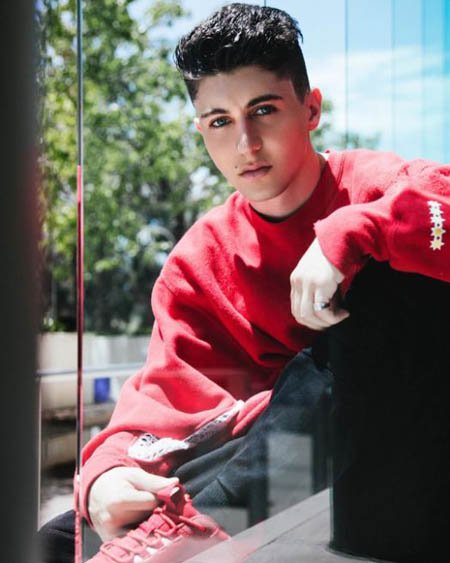 Gregory Kasyan is a particularly well off kid with a sweet net worth.
Source: Instagram

Gregory started working in 2010 and the only high paying and bank balance altering project; the actor’s been a part of Daybreak, where the actor was paid about $12,000 per episode. It is not earth-shattering money earned by the actor, but north of $100,000 is still a lot of money.

When everything is considered the net worth of Gregory Kasyan sits at about $250,000, and it is only going to grow further as the actor books more movies and TV shows over the years with him being “the” or “one of the” top billing for a film or a TV show.