Ian Somerhalder was born on 8th December 1978 in Covington, Louisiana, to parents Edna Somerhalder and Robert Somerhalder. His father was an independent building contractor, whereas his mother was a massage therapist. He is the middle child among the three siblings. He’s got an older brother named Robert and a younger sister, Robyn.

Ian studied at a public school in Louisiana called Mandeville High School. He began modeling at the age of 10 and continued to pursue a career in this field for the next three years. Later, when he was 17, he opted to dive into the profession of acting. Ian Somerhalder is a director, model, and activist, besides his career as an actor.
Source: Pinterest

The actor is best known for the role of Boone Carlyle in the ABC drama series Lost. Moreover, he played the character of Damon Salvatore in The CW’s supernatural teen drama series The Vampire Diaries.

Ian Somerhalder has had two notable relationships with high profile stars. One of them did not carry the legs to go the distance while the other couldn’t get more blissful even to this day. Perhaps the second time was indeed the charm for this dashing actor. 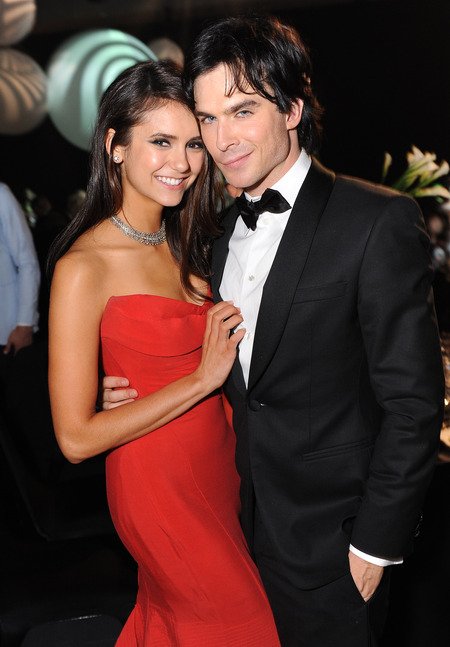 The actor was in a relationship with his The Vampire Diaries co-star Nina Dobrev for three years from 2010 to 2013. The former lovebirds played Damon Salvatore and Elena Gilbert in the CW series.

Following their split, the duo vowed not to let their personal relationship get in the way of their onscreen chemistry.

Ian Somerhalder is married to his wife Nikki Reed since 2015.
Source: In Style

A year following his breakup with Nina, Ian began dating another actress girlfriend, Nikki Reed. They were initially spotted in July 2014, displaying PDA at an L.A. Farmers Market. Apparently, their mutual love for animals is one of the major reasons the pair clicked so well. Only a month into their relationship, Ian and Nikki adopted a horse named Eagle as well as a kitten.

The couple got engaged in February 2015 following a beautiful proposal that Nikki wants to keep private. A couple of months later, the duo decided to tie the knot. Their married life subsequently began following a delightful wedding ceremony on 26th April 2015, in Malibu, California.

The husband and wife duo announced their pregnancy in May 2017 after much speculation. A couple of months later, they welcomed their first baby, a daughter named Bodhi Soleli, on 25th July 2017.

What is Ian Somerhalder's Net Worth? Ian Somerhalder holds a substantial net worth from his impressive career.
Source: Access

Ian Somerhalder made his acting debut with the TV series The Big Easy in 1997. Three years later, he featured the central role of Hamilton Fleming in 8 episodes of Young Americans (2000). He then made his official movie debut in 2001 with the drama film Life as a House. Subsequently, he starred in several movies in his career; however, it was the small screens where he gained the biggest stardom.

Ian appeared in 6 episodes of Smallville (2004) as Adam Knight. Three years later, he played the recurring role of Nick for six episodes in the drama series Tell Me You Love Me (2007).

Meanwhile, the actor’s most significant fame arrived when he landed the role of Boone Carlyle in the American drama series Lost. He played the lead role in season 1 and special guest appearances in seasons 2, 3, and 6. In total, he starred in 28 episodes.

In 2009, Somerhalder played the character of Damon Salvatore in the Supernatural teen drama series The Vampire Diaries. He continued his role for eight seasons till 2017, starring in 171 episodes. His most recent project is Netflix’s science-fiction horror series V-Wars (2019) as Dr. Luther Swann.

Ian Somerhalder’s net worth is estimated at $8.5 million.