Jonah Lees was born to become a performer, not that he was influenced by anyone in his family to take up acting and singing, he gravitated towards it all himself. When someone is bursting with talent, then there needs to be an outlet, Jonah found the perfect one through acting, songwriting, and singing, and he excels in all three.

The young actor was born on 24 November 1995, in Colchester, United Kingdom, to his parents. He was born about a minute after his elder-brother Christian Lees; they are identical twins. The twins, both, loved to perform from a young age, and they started acting around the same time and later found fame appearing in the same movie together.

Though Jonah Lees started appearing in movies and TV shows from the time he was ten years old, it took a while for the actor to really start making a mark. From the first moment he started in acting schools, it was clear the actor was going to make it big, and now he will get the chance to showcase all of his talents to the world when he appears in the Netflix series The Letter for the King as Jussipo.

Netflix is bringing the almost 60-year-old Dutch novel to life with the show being called The Letter for the King, which is also the tile of the novel. The book won numerous awards over the years and was recently translated into the English language. This is also Netflix’s first Dutch adaptation, even though the language used by the actors will still be English.

Jonah Lees plays Jussipo in the Netflix series The Letter for the King, which follows the journey of a young squire, Tiuri, dreaming of being a Knight one day, whose mission takes him into a different path. The fate of Tiuri, played by Amir Wilson and his friends, will make or break the fate of the world. Jussipo plays the comic relief and also the quirky, smart guy of the group of friends who take on the journey to deliver a letter for the King. And by the looks of the pictures released by the promotion department of the series, he also seems to be a bard, someone who enjoys singing and playing instruments.

From a young age, the twin brothers wanted to be actors, and they showed their talents early on. This was followed by a series of appearances on stage, which resulted in on-camera movies and TV appearances. After his schooling was done, Jonah enrolled in the London Academy of Music and Dramatic Arts, where he trained for a while.

The actor also trained in Sylvia Young Theatre and The National Youth Theatre of Great Britain, and from the first time he was in the class, the teachers knew he had something special. Appearing in the stage play of Marry Poppins to appearing in one episode of Holby City, everything was seemingly working out for the actor.

Jonah Lees subsequently appeared in different productions, culminating in Tale of Tales in 2015, where he played the character of Jonah, starring Salma Hayek, and along with his brother. The movie brought the actor some fame, and he combined that with an appearance in Sun Records, which also got Jonah a lot of attention. But the biggest role of his career to date will definitely be playing Jussipo in the Netflix series The Letter for the King. 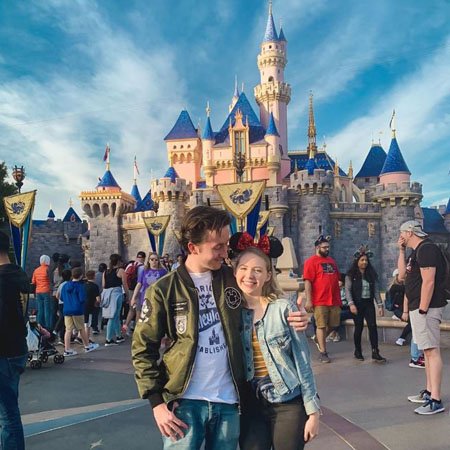 Jonah Lees did not share personal pictures before on his Instagram feed, with most of them being videos of him singing or spending time with his brother. But recently, in November, the actor shared a post on his Instagram, smitten with his girlfriend, Nicole Alyse Nelson.

Nicole also shared a photo of the two together with a heartwarming caption. The cute young couple seems to have fallen in love, hard. They've been together for over two years now, it is nice to see the love between the two. Considering how beautiful these two are, we are not surprised they are attracted to one another, and we’ve got nothing but good wishes for the young flame, may their relationship last a long time.