Lahna Turner was born on 15 July in the US where she grew up wanting to do comedy and learn how to play the guitar. She finished her schooling in her hometown and with a bag full of written down lyrics and a head full of hope, Lahna set out on a journey to fulfill her dream and make something of herself.

The problem with creative people is the fact they can never focus on their studies, and they need some other outlet to express their feelings and emotions. Lahna found funny songs and guitar were her outlets, and she took her talents to a club where she performed one of her songs and got some laughs, then the manager paid her $20 for her trouble. This was the turning point in her career, Lahna realized she could make money from her songs and her jokes and so began her career. Lahna Turner is a comedian who uses songs in her performance.
Source: Instagram @lahnaturnerr

Though the singer is known by people who still listen to comedy albums as the sharp-witted funny girl, there is another reason she is known in the world of comedy. She is known for her relationship with her late husband and beloved comedian, Ralphie May.

Meeting Ralphie May, Falling in Love and Getting Married Ralphie May and Lahna Turner met in Houston during an open mic.
Source: Twitter

Ralphie May was born on 17 February 1972 in Chattanooga, Tennessee; he was the fourth out of four children of his parents, and the comedian grew up with his siblings in Clarksville, Arkansas. He was only 17 years old when he started on the journey to becoming a comedian, but he went through a lot before getting on the stage after winning the contest to open for Sam Kinison, his idol.

At the age of 16, he was involved in a car crash, and the comedian was already fat before the accident, but after the crash, his weight crossed 800 pounds. For his whole career, he battled with weight problems, but he was not going to let his weight hamper his acting career. 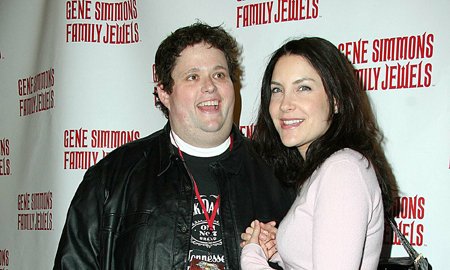 Lahna Turner and Ralphie May fell in love after their first meeting in Houston.
Source: Daily Mail

Over the years, he developed his act and furthered his career, but the comedian was still struggling with his weight which is why he got a gastric bypass surgery in 2004 and lost over 350 pounds of his body fat. This was also the time he met the woman he was going to marry in the future.

Lahna was in Houston while visiting an open mic, and Ralphie was also there to see and maybe perform a little, but instead, he found the person he would share the next decade of his life with. Both the comedians fell in love, and soon the couple was ready to walk down the aisle which they did on 3rd July 2005, in the presence of their beloved, the couple exchanged their vows and kissed after the priest pronounced them man and wife. The couple not only got married but also got busy with bringing two beautiful kids to this world. In 2007 their daughter April June May was born a healthy kid followed by her brother August James May who was born in 2009.

While raising their kids, the Lahna also started working on TV shows and her comedy albums while also hosting The Perfect 10 podcast with her husband, the couple worked on a couple of projects together. But after the first decade of the 21st century was over, Lahna’s husband started contracting pneumonia, and there were multiple trips to hospitals. Pneumonia also caused the comedian to lose over 40 pounds of weight. Through all this, the comedian kept performing and maintaining his dates, but there was also a rift forming between the couple by the time the mid-2010s arrived.

Filing for Divorce and Death of Lahna’s Husband Ralphie May and Lahna Turner were getting divorced when he died in 2017.
Source: People

The couple hit some rough path after over ten years of marriage, and it was not something they could fix with talking to each other. The husband and wife grew estranged, and Lahna filed for divorce in 2015 while also filing for joint custody of their two children.

The couple was going through the court’s proceedings when Ralphie died. For all his adult life, the comedian dealt with obesity and all the complexities which arrive when a person is obese. The immune system is shot, and almost all organs are working at full capacity, and our body can only sustain overworking for so long. Ralphie May died on 6 October 2017 after a show in Las Vegas.
Source: Washinton Post

Ralphie was in Las Vegas, Nevada where he was supposed to do a meet and greet with the people who came out to see his show. The comedian was showing signs of deterioration, by the time the night was starting, Ralphie went into cardiac arrest on 6 October 2017, and it was the final time he was alive on this earth.

After the death of Ralphie, the divorce, which was still pending, was never finalized and Lahna became the widow of Ralphie while taking care of their kids.

Lahna continued touring and performing comedy shows to make sure her children get a safe and worry-free growing environment. She is still successful with her comedy albums which are on constant spin on the radio.

The actress also recently executive produced a documentary on her husband entitled What’s Eating Ralphie May? while also hosting their former couple’s podcast The Perfect 10 show. She is making it all work after her husband’s demise, for herself and their children.