Laura Savoie was born and raised in St. Louis, Missouri, by her parents, where she stayed all of her childhood and teenage years and also got her high school education there. After her initial studies were done, she moved to California so she could enroll in Pepperdine University. Laura studied in Pepperdine, where she earned her Bachelor's degree, then moved on to the University of Notre Dame, where she got her Masters, and now she is at The University of Texas at Austin where she is studying for her PhD.

The reason Laura is currently in the limelight is because of her recent engagement with the actor Dennis Quaid who is 39 years her senior. Dennis is currently 65 years old, whereas the PhD student is 26 years old.

The Relationship between Laura Savoie and Her Fiancé Dennis Quaid Dennis Quaid is an actor who is popular for his appearance in the movie The Parent Trap. He’s appeared in numerous films over the years after starting his career in 1975. Over the years, the actor’s been married three times and in numerous other relationships.

After the failure of his third marriage to Texas Valley real-estate agent Kimberly Buffington, the actor started a relationship with French-Canadian model Santa Auzina, but after three years together, the couple called it quits in 2018 and a couple of months later, Dennis was dating again and this time with someone who is 39 years younger than him. Laura Savoie and Dennis Quaid are together for about half a year.
Source: Fox News

It was reported in June, the actor was seeing a PhD student from The University of Texas, and the relationship was confirmed when the private Instagram account of Laura was followed. There were pictures of the couple together with her writing, sweet captions of the duo being in love. Though the images and the caption are still not public, it was reported the couple was in love.

The love between the two blossomed in a matter of months, and they were seen together for the first time, holding hands and in love. But after only 4-5 months of dating, the lovebirds grew close to each other, to the point where Dennis decided it was the right time for the two to get engaged.

Sweet and Surprising Proposal and Getting Engaged; Facing the Ridicule of Exes and the Internet Laura Savoie and her Fiance, Dennis Quaid, enjoying themselves on the beach.
Source: Online

The couple was together for less than half a year when the actor decided he needed to put a ring on it. Dennis and Laura were in Turtle Bay, Oahu, enjoying some time off. He filmed the new movie Midway in Hawaii, and it was the right place for the couple to get engaged.

Dennis and Laura were on vacation, and the actor talked about how they got engaged to Extra TV. He said, “It happened on the very northernmost point of Oahu, at Turtle Bay. It was kind of spontaneous. It was very much a surprise,” the actor set the scene. “I had the ring in my pocket… It has been kind of a month-and-a-half plan… I wanted it to be private. She was actually taking a selfie of us, and I put the ring in front and said, 'Will you marry me?' — and then she fell down.” Dennis Quaid used a five-century old engagement ring, which the actor bought while on a trip to Italy. Giorgio Bulgari showed the ring, and it was perfect for his proposal.

Well, as with almost everything in the world, the couple was ridiculed for their choice to get engaged, considering the age gap. One of the first people to come after the couple was Dennis’ Parent Trap co-star Elaine Hendrix who drew some obvious comparisons between the movie’s plot and the real-life engagement of the two. In a tweet, she wrote, “Watch out for those twins.”

Watch out for those twins. 👯‍♀️ https://t.co/Rloat1gLCy

Elaine is referring to the twins who tried to prank their way into getting her character away from their dad so he can be with their mom. The actress played a 26-year-old in the movie, and her character was the fiancée of Dennis’ character. The thing which makes it funny and also real is the fact Dennis is the father of twins with his third wife, and this is almost like life imitating art.

Well, it was a tongue-in-cheek quip by Elaine, but then the floodgates opened, and people were all over the couple, making fun of them. Even Dennis’ ex Lea Thompson got involved in the roasting of the couple. Check out the tweets below;

Omg he is the living embodiment of SNL’s “Meet Your Second Wife” sketch, except double. 😂 pic.twitter.com/y8OsO2zWam

A 39-year-old Dennis Quaid sits outside a hospital’s nursery, he’s approached by a new father, “Which one is yours?”

Dennis points at an adorable newborn, “In 26 years, that one.” https://t.co/cKRcSLNSaX

Brutal, to say the least! Laura Savoie is getting her PhD at The University of Texas.
Source: Celebrity Health Fitness

Laura moved to California to study her Bachelor's in the Pepperdine University where she finished her Bachelor of Science Accounting course in three years. She was the Valedictorian of her class and graduated with a 4.0 cumulative GPA. Laura was also given five scholarships and one grant during her stay in Pepperdine.

By the time she graduated, Laura was given the Outstanding Graduate in Accounting award, and then she moved to Notre Dame to get her Masters. As part of the University of Notre Dame, she visited Sao Paulo, Brazil, and Santiago, Chile, for MBA Intern Immersion. Then, she finished her Master of Science of Accountancy in 2015 with a CGPA of 3.93. 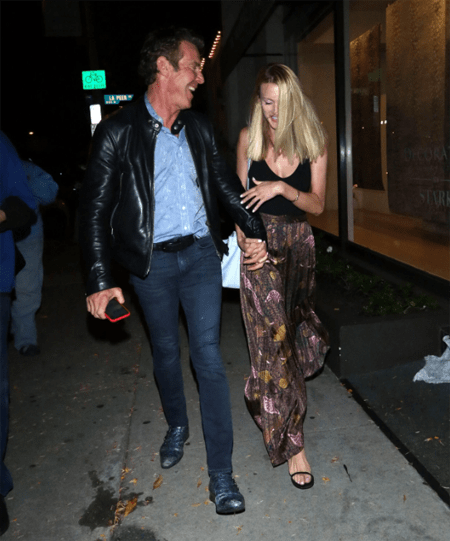 After her Masters was done, Laura worked for Ernst & Young as an Assurance Staff between the years of 2015 and 2017 while also getting licensed as a Certified Public Accountant and also getting her Real Estate License and then became a certified yoga instructor.

Past Relationships of Laura Savoie and Dennis Quaid Jeremy Piven and Laura Savoie were said to be in a relationship.
Source: NME

Like we mentioned above, Laura is a private person who only came to the public’s attention after she started to go out with Dennis. But we do know of one rumored relationship of the PhD student, Jeremy Piven and Laura Savoie, were said to be in a relationship at one time, but the exact time and how long they were together is still being pieced together.

Dennis, on the other hand, is a man who was married two times before his new fiancé was even born. The actor married P. J. Soles, who is also an actress and appeared in the movie Carrie on 25 November 1978, and after less than five years together, the couple got divorced. The actor was involved in a few relationships in the 80s, including getting engaged with Lea Thompson. After a few flings, the actor got married to the actress Meg Ryan on Valentine’s Day of 1991, and their son Jack Henry Quaid was born on 24 April 1992 (Dennis’ son is older than his new fiancé). The couple got divorced on 16 July 2001.

After dating Shanna Moakler for eight months, the actor got married to Kimberly Buffington, who is a real estate agent in Texas, on 4 July 2004. Their fraternal twin kids were born on 8 November 2007. The couple named the daughter, Zoe Grace, and the son, Thomas Boone. Dennis Quaid and Meg Ryan were married in 1992.
Source: Independent

The couple was married for about eight years when Kimberly filed for divorced in 2012, but she later withdrew the papers, and then on 28 June 2016, the couple announced they were separating and getting divorced.

Most recently, Dennis was involved in a relationship with the French-Canadian model Santa Auzina with whom the actor was said to be getting close, and the couple was on the verge of getting engaged. But after three years together, they decided to go their separate ways in the early part of 2019. Dennis Quaid and Kimberly Buffington were married for more than a decade.
Source: People

The hope is for Laura Savoie and Dennis Quaid to find love with each other, and this relationship lasts longer than Dennis’ past marriages and affairs, also, we want to congratulate the newly engaged couple. (There is currently no fixed date for the couple’s marriage ceremony.)