When it comes to movies and TV shows, Mat Fraser is maybe known to some horror show fans, but to the rest of the world, he is a complete unknown. The actor is, however, known in a small circle to theatre enthusiasts because he's appeared in many theatre productions including doing Shakespeare. But his biggest call to fame was the supporting performance in the fifth season of the American horror show American Horror Story.

Born in 1962, God didn't bless the future actor with all his faculties, he learned how to breath when he first arrived in a hospital in England, but his birth was with a physical disorder. Mat suffers from thalidomide-induced Phocomelia, the disorder caused the actors' limbs to not fully grow. He is a handsome and charismatic man who knows what he is best at and never really lets the disability get the best of him. Mat is a drummer, an actor, a stage performer and someone who took his "disability" and made it into his strength. Though he was always limited in what he could do, still, it didn't stop the actor from taking on the role of host of a pre-televised segment that aired during the Paralympics. He was also one of the performers during the opening night who showed off his drumming skills and laid it all out during the event for all to see.

Mat was talented from a pretty young age but the music was not his only passion in life, there was something else he wanted to do with his life. The one true passion of his life was acting and through various ups and downs and rejections and offers, everything led to one of the highly anticipated series this year, His Dark Materials. Raymond Van Geritt is not exactly the brightest bulb among the Gyptians, and he is also not someone who is considerate in the few times we see him in the book by the award-winning writer Philip Pullman. But the only couple of times we read about him in the books, he was an understanding man.

As mentioned above, Raymond is a Gyptian, people who live among themselves and do not mingle with the other people. When it comes to geography, they are far and wide, but they are also not a big tribe of people with all the Gyptians knowing each other. The Gyptians are ruled by Lord Faa, and the only time we hear from Raymond is during his discussion with the king. In one of the scenes in the book, Lord Faa is convincing the people to go and rescue the children and while he is talking, Raymond interrupts and asks if they are bringing back all the kids after rescuing them from the kidnappers, even the landloper kids.

Lord Faa just simply replies what is the sanity of battling all those people to get to the scared little kids and at the end tells them they are only there for the Gyptian kids and everyone else should wait there. In another scene, he also wanted to bargain with The Authority and give up the landloper kid they were looking for.

Watch: His Dark Materials trailer for the first season

The character is not a consequential one in the book and considering he is only going to appear in only one episode of the series His Dark Materials, we are not expecting much from the character. Though, considering Mat is portraying the character, we cannot wait to see how he delivers.

Mat is Happily Married to His Wife Julie Atlas Muz Julie Atlas Muz is a burlesque performer, and she and Mat found love in an opportune time. The couple got married in 2012 and for the past seven years, they enjoyed each other's company. While she is out being "the royalty of burlesque," Mat is going around the world, making movies and TV shows.

Julie is best known for her performance around the New York area, and she is known as one of the most talented dancers and performers in the world when it comes to burlesque. 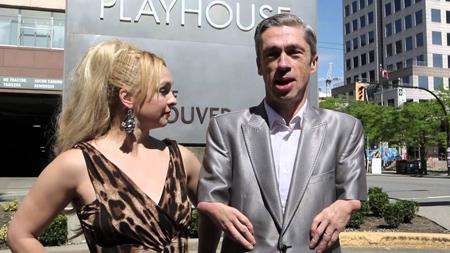 Both of them seem to be busy with the work of their own, but just because the couple is not with child right now, doesn't mean they are not planning. We are hoping to see a bundle of joy from the lovebirds pretty soon.

The Theatre Career of Mat Before getting his break in the movies and TV shows, the actor made his name after joining the Graeae Theatre Company, the leading theatre troupe for disabled people. This was the place where the actor got his first big break with the play What the Butler Saw where the actor played the character of Dr. Prentice.

The role was followed by the actor getting invited to perform in numerous other plays, and by the 90s, he was an established star of the production company, and he was able to make a living off his acting career. Mat Fraser played the character of King Richard III in a play.

After the turn of the century, there was the play of Thalidomide!! A Musical, where the actor played all of the characters of the drama with actress Anna Winslet. Their performance was lauded, and this was also the time when he was starting to get more gigs in the movie and TV industry.

While enjoying a career in movies and TV shows, the actor was hired to play the role of King Richard III which he described as a disabled guy playing a disabled guy. The actor was one of the vocal advocates of the disabled roles being given to real disabled people and not actors pretending to be one. This was a huge win for the actor, and his performance proved Mat was up for the task. The character Mat plays in the show is also suffering from phocomelia, and this role was the best of his career because this one series provided the biggest exposure for the actor. He appeared in all the 13 episodes and played an important role in the fifth season of the series. Though the actor appeared in many other theatre productions, movies, and TV series, this was the actor's call to fame. This is the one job he will never leave off his resume just because of the sheer attention it brings to the talent he is as an actor.

Tune in to Celebs In-Depth for more intriguing Biography and Celebrity Life content.