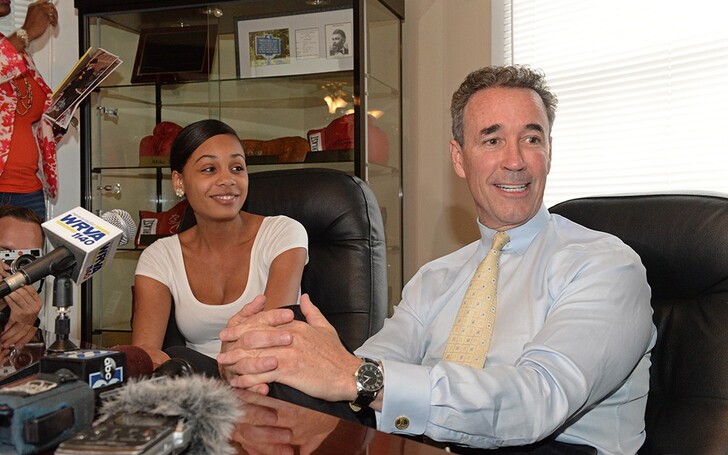 Myrna Pride, born on 20th March 1996, is best known as the wife of the Virginia senate seat winner Joe Morrissey. Her family members include her parents Deidre Warren (mother) and Coleman Pride (father). As for her siblings, she's got an older sister named Deidra Pearson.

The resident of Richmond, Virginia, has been at the center of controversy for several years. However, she stuck by her controversial partner despite people raising their eyebrows.

Myrna Pride is married to her husband, Joe Morrissey Joe Morrissey tied the knot with his wife on 11th June 2016. However, their married life has been anything but plain sailing.

Myrna Pride and Joe Morrissey first met in 2013 when she was merely 17. She worked as a receptionist at the Richmond Foot and Ankle Center. As per the court documents, Morrissey would often come and visit her at her workplace.

Pride's co-workers noticed the duo talking about Myrna's imminent graduation from high school. Meanwhile, Myrna's sister warned her against getting too close with a man who is 39 years older than her.

In 2013, Deidra revealed her sister Myrna and their mother moved into her house following a fire incident at their home. Moreover, she was providing support to her sister financially.

A few months later, Pride landed a job at Morrissey's law firm. She was an intern who worked as a receptionist. Additionally, some reports claim she was also Morrissey's secretary.

Pearson's concern for her naive baby sister began to grow with each passing day. She noticed her exchanging late-night texts. Moreover, the pair would often stay out late. Myrna's friend even confirmed the duo had shared texts of sexual nature.

Pearson was not gonna let go of this, so she decided to follow her sister, where she found the two on a date. After a while, the duo headed for Morrissey's home, which quickly prompted her to call for her father's help.

Their father, Coleman called the cops to Joe's home. This was followed by an investigation into an inappropriate sexual relationship between the attorney and then underaged girl.

Although Coleman accused Joe of preying on Myrna, both the duo denied the accusations. Morrissey was subsequently charged with multiple felonies. He apparently had a nude picture of Pride that he shared with a friend.

Despite the evidence stacked up against him, Morrissey was not willing to give in so easily. He took shots at Myrna's father as well as the prosecutor and refused to hand in his resignation.

Later, Joe reluctantly opted to maintain his innocence by bargaining an Alford Plea to one misdemeanor charge. He managed to keep his status in Richmond politics while serving a three-month sentence. Joe Morrissey with his wife, Myrna Pride, and kids.
Source: Earn The Necklace

During the aftermath of his legal battle in 2015, Pride gave birth to her first child, a son named Chase. Although the father was not identified at the time, Myrna and Joe released a photograph with their boy, all three of them dressed in vintage outfits.

Morrissey has released his family album in full resolution. pic.twitter.com/xHQfjaffpQ

Later on, Morrissey, the holder of $35 million net worth, admitted to being the father of Chase in a press conference. Both the couple claimed they didn't indulge in any sexual activity until she was of legal age.

The duo exchanged vows the following year on 11th June 2016. The wedding was held in Varina, Virginia. They share three children in total - Bella, Maverick, and Chase. Morrissey, meanwhile, has four more kids from his other affairs, one of whom is named Kennedy.

The couple despite all the obstacles appear to be on the same page. Joe Morrissey's wife was vocal in displaying her support for her spouse during his campaign for a state senate seat in Virginia. Pride claimed her husband is tenacious and the best choice for the people.