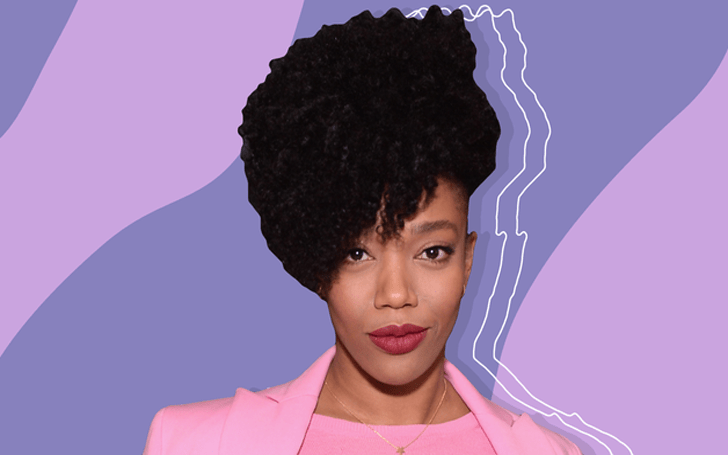 Naomi Ackie is a British actress who is little to pretty much unknown this side across the pond. The actress appeared in a few British TV shows and garnered critical acclaim for her debut movie, and also movie festival success. But to the American audience to the most of the world, she is an unknown quantity until now with her upcoming addition as Jannah in Star Wars: The Rise of Skywalker sure to turn some heads and introduce her to a broader audience.

Born on 2 November 1992 in England, she wanted to be an actress since she moved away from her childhood. The main catalyst, according to the actress, was her appearance in a Christmas Show when she was only 11 years old. She was playing a modern angel Gabriel, and for the part, she wrote a rap, which the actress stated, she can still recite, and the whole experience of being on stage and expressing herself in a different way was something she wanted to part of for her whole life. Naomi Ackie started acting at the age of 11 in a Christman Show.
Source: Instagram

In an interview with Constellation Mag, the actress stated it was a happy childhood for her, and it was filled with playing, learning, and “singing musicals when no one was listening.” While she was still at the bottom rung of the entertainment pole, her parents were extremely supportive and patient about her choice, and now all her hard work paid off with the actress set to appear in Star Wars: The Rise of Skywalker.

Playing 'Jannah' in the Upcoming 'Star Wars: The Rise of Skywalker' The poster for 'Star Wars: The Rise of Skywalker' coming to theatres on 20 December 2019.
Source: Inverse

Star Wars saga is concluding its four-decade-long saga with Star Wars: The Rise of Skywalker. George Lucas talked back in the day when the Star Wars series was setting the world on fire, he envisioned the series to produce nine episodes, but he was not able to make it all in the time he wanted to get it all done.

Other people came in, and the prequels got made with the creator of the Star Wars series sitting front and center in the creation of the prequel trilogy. The intended outcome was not achieved, and most people felt the prequels were lacking in quality. The series again went dormant, and Disney took over LucasFilms and soon started a sequel trilogy with its share of detractors.

Watch: The Trailer for the Upcoming 'Star Wars' Finale Movie

Now, after over 40 years, the saga is concluding with Star Wars: The Rise of Skywalker, with the movie being dubbed the final one in the Skywalker saga. To bring the series home, all the characters of the past films are coming back, and new characters are also added to aid the Resistance in their battle to rid the world of the tyranny of First Order.

One of the new characters being added to the final movie is Jannah, a bow and arrow wielding, Orbak riding, latest addition to the Resistance, who is also a warrior, and someone who will play an important role in the final movie. Jannah is being played by Naomi, and though the people involved in the film are not allowed to speak any spoilers or divulge much information, when she was announced as playing the character in Star Wars 9, she talked about her role. When pestered with questioned about what she will be doing in the movie, the actress provided a vague answer and said Jannah “definitely makes her presence known.” Again, during an interview with Total Film, the actress stated, “Jannah is a warrior, and she comes into contact with the rest of the group at a point where they need some help. She is part of the Resistance, and she's spent a long time acquiring skills that might be helpful when it comes to the big conclusion of the film. So she shows up at the right time.”

There are rumors speculating she could be the daughter of beloved Star Wars character Lando Calrissian, but the actress was again not divulging any information. She addressed the speculation by saying, “Lando is a very charming man, so he could have children all over the universe, that's all I'm saying.” 'Jannah' will play an important role in the movie.
Source: SYFY Wire

We will all need to wait till Star Wars: The Rise of Skywalker hits the theatres on 20 December 2019 to find out who Jannah is and what her role is in the larger picture.

Loving Theatre, Acting in 'Lady Macbeth' and Getting Cast in 'Game of Thrones Prequel' Naomi played the role of 'Anna' in the movie 'Lady Macbeth.'
Source: The British Blacklist

Before she even stepped foot on a recording stage, Naomi took her talents to the live stage to work on plays. She also enrolled in the Royal Centre School of Speech and Drama, and it was while studying in drama school she started writing poetry and her muse was the train, “I think there's something so nice about all walks of life crammed into one tiny space,” Naomi revealed about writing on the train.

From stage, she moved to the next stage of her career, which was appearing in TV shows. A few one-off appearances later, she got the audition for Lady Macbeth starring Florence Pugh, where she auditioned for the role of Anna. The actress said she bombed at the audition and came home crying, but a month later, she got the part and the movie garnered critical acclaim in the award circuit and general media.

Watch: The trailer for Lady Macbeth which was released in 2016

For her portrayal of the character of Anna in the movie, the actress received an award from the Most Promising Newcomer Award by the British Independent Film Awards in 2017. After that, she got a supporting role in The Bisexual and The End of the F***ing World.

We already talked about Star Wars: The Rise of Skywalker and what a big deal getting the role in the movie is, but she not only scored one huge fanbase role, she was also cast in the upcoming Game of Thrones Prequel series. Naomi Ackie will appear in the Game of Thrones Prequel series.
Source: Syfy

There is not much known of the upcoming GOT prequel series, but Naomi was hired among the main cast, and the series recently finished filming the pilot episode, which resulted in the series being greenlit for a whole season.

Naomi will not only end the year of 2019 with a bang, playing Jannah in Star Wars 9; she will also be part of the highly anticipated prequel series of Game of Thrones, which is expected to arrive in 2020. Naomi Ackie is not currently in a relationship.
Source: Instagram

The actress is two weeks shy of her 27th birthday, and it seems she is entirely focused on her career. There is no mention of a partner in her life either in social media or in tabloids. She seems to be happy being a single lady while enjoying so much success, both in movies and TV front.

There is probably a plan for relationships, down the line for the actress, but as of this moment, she is happy and living her best life.