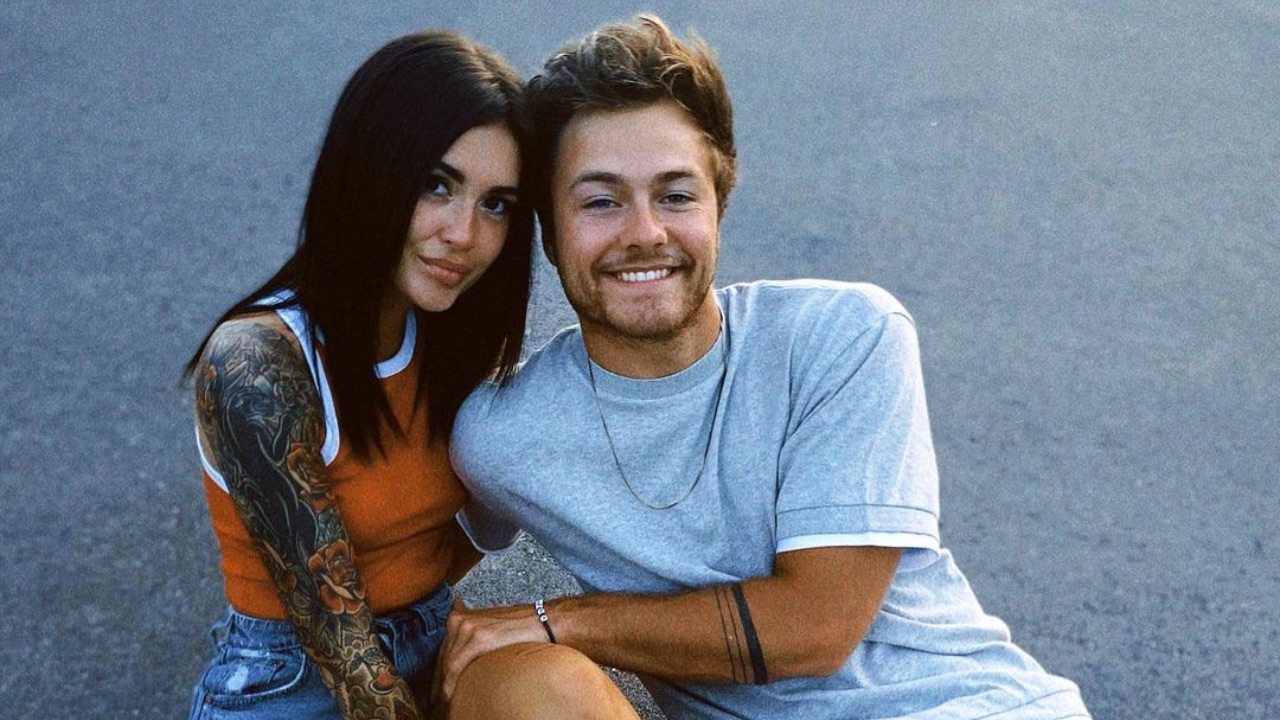 Peyton Meyer career started at the age of 14 when he became a Disney star. Since then he has appeared in many family friendly productions over the years, making his name among the younger generation. Even more so now as Jordan Van Draanen in Netflix's He's All That. But for those looking for more personal information, here is everything you need to know about his girlfriend in 2021.

The former Disney star was born on 24 November 1998 to his parents Elizabeth and Robert Meyer in Las Vegas, Nevada. He has one brother and one sister and the family of five lived together until Peyton moved out to pursue his career. Attracting interest in the world of show business from a young age, he started auditioning in his teen years and soon started to find work.

Since his debut in 2014, the actor has managed to garner a massive following. He has been working non-stop for half a decade and also managed to garner over 2 million follower on Instagram. Becoming a star comes with it's perks and also some drawbacks, so when millions look at his profile, they want to know every detail about the actor. From his familial life to relationship to his girlfriend, so, we have compiled a timeline for you to better understand his personal life. Peyton Meyer is currently dating his girlfriend TAELA aka Taylor Mae LaCour in 2021. They have been together for less than a year.
Image Source: TAELA Instagram

Peyton Meyer has been turning heads and causing heartbeats to skip since his debut. He is a handsome young man who knows his audience. So, there would be no surprises in hearing that most of his fans are girls of his own age. They saw him grow up on TV, some even grew up with him, so, you understand the attraction of millions of followers.

After having been invested in his life for over 6 years, they feel like his journey is something they want to experience as well. With all that dedication comes need to be informed on every aspect of the star's life. So, we can understand the need to know who Peyton is dating in 2021. Well, we do know of one current relationship with his gf and some fans appear to be approving of the new development in his life.

Peyton Meyer is Dating His Girlfriend TAELA in 2021

The star of Netflix's movie He's All That made his relationship public in 2021, after sharing a picture with his girlfriend during Valentine's Day. Peyton Meyer is currently dating his girlfriend TAELA in 2021. They have been together for less than a year, as per our investigation. Their first appearance came on TikTok followed by making their relationship Instagram official.

TAELA, whose real name is Taylor Mae LaCour, surprised millions of TikTok users when she made a video about her childhood crush and her current boyfriend. The latter part of the video sent fans on a spiral as the video showed Peyton's picture on screen. Fans were quick to ask the couple if they were dating in the comment section. You could help a few of the fans hyperventilation after the announcement.

It did not take long for Peyton and TAELA to make their relationship official, putting all the questions to rest. Peyton and his girlfriend shared pictures of one another on their respective Instagram pages, on the same day. TAELA shared a masked up snap of the couple on 14 February 2021 with the caption, "anywhere with you." The Jordan Van Draanen actor shared the same snap with a single red heart as his caption.

Since making their relationship official, their social media pages have seen a steady stream of loved up pictures featuring the two lovebirds. Peyton Meyer shared a cute snap of the couple on the occasion of her birthday. In the caption he wrote, "Your strength is contagious and you have made me a better man. I don’t know who brought you into my life but I need to start writing some thank you notes. 24 has some big things coming for you. Happy birthday baby."

And for those wondering who TAELA aka Taylor Mae LaCour is? Well, she is a full time singer with a few songs released under her stage name. Raised in Missouri, the Nashville born singer is described as someone who blends, "old-school soul and pop with mainstream pop and alternative music." TAELA recently turned 24 and she has a modest following on social media as well as decent play on music streaming sites.

More recently Peyton's girlfriend congratulated him on his big day. The star was appearing in the Netflix movie He's All That which has shot to number 1 position in many countries. TAELA wrote on Instagram, "big day. proud of you, baby!#itsjvddamnit." She shared a picture of the couple along with the caption and it appears both are happy with where they are personally and professionally.

He's All That is the latest Netflix rom-com shoot all the way up to the Top 10 list in multiple different countries around the world. Featuring some recognizable young faces, He's All That is a gender-swapped remake of the hit 90s movie She's All That. By all accounts, the 2021 remake appears to be a hit.

The rom-com follows Padgett Swayer who is humiliated online after she catches her boyfriend cheating and the moment is captured live. The event leads to her losing followers and her own self esteem. But soon a bet in school leads her to a new projec, Cameron Kweller, a loner who she claims can become the prom king, with her help.

Peyton Meyer plays Jordan Van Draanen in He's All That. Jordan is an aspiring musician with questionable musical talent but a massive following on social media. He is Padgett's boyfriend and causes her to lose many followers after a cheating incident. Through out the film his irritating work causes some laugh as well as a fight. And Peyton does a fantastic job with a pretty unlikeable character.

He's All That is currently streaming on Netflix. The cast of the film is led by Addison Rae as Padgett Sawyer, and Tanner Buchanan as Cameron Kweller, with Madison Pettis as Alden, Rachael Leigh Cook as Mrs. Sawyer, Peyton Meyer as Jordan Van Draanen, Myra Molloy as Quinn, Isabella Crovetti as Brin Kweller, Annie Jacob as Nisha, and Andrew Matarazzo as Logan also starring.