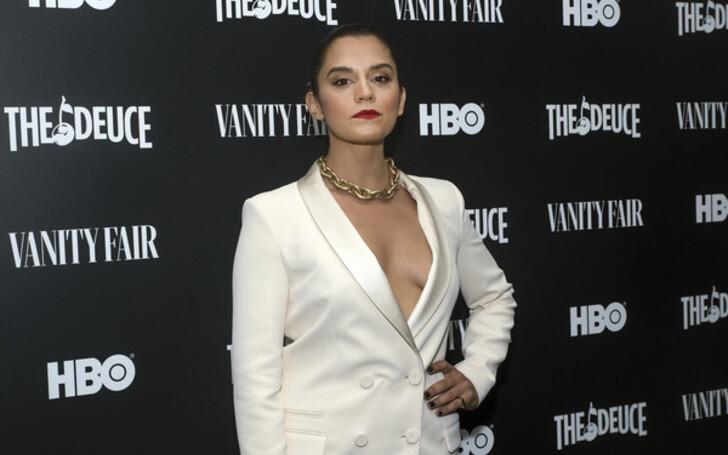 Sepideh Moafi was born on 18th September 1985 in Regensburg, Bavaria, to Iranian parents, Enayat Moafi (father) and Soraya Moafi (mother). Her family is completed by her sibling, an older sister.

Sepideh Moafi is starring as Gigi in 'The L Word: Generation Q' (2019)

The series is a sequel to the original drama The L Word that aired for five years from 2004 to 2009. The new series continues the adventures of a group of women, most of whom are lesbian.

Unlike the initial series that was set at West Hollywood, California, The L Word: Generation Q is relocated to Silver Lake, Los Angeles. The show premieres on 8th December 2019.

A Quick Glance at the actress' Career and Net Worth Sepideh Moafi has an estimated net worth of $70,000 from her growing career.
Source: Sepideh Moafi Instagram (@sepidehmoafi)

Sepideh Moafi made her acting debut with the short film Violet Is Single (2010). She then appeared for a single episode in a number of series - Blue Bloods (2013) as Aaliya Zaki, Unforgettable (2014) as Lisa Martinez, and Nurse Jackie (2014) as Mrs. Harrison.

One of Moafi's prominent roles came in the psychological medical drama Black Box (2014), where she played the role of Dr. Farrah Mahmoud for seven episodes. She then made an appearance in The Good Wife (2014) for a single episode as Sylmar Knausgaard.

In 2014, the actress featured in a couple of movies; initially, a TV movie called Red Zone as Frida Moussaf, and Best Man in the Dark, where she played the character of Tereza Lopez.

A year later, Sepideh made single episode appearances in a few series. She played Melanie Sparo in Forever (2015), Mary Henning in The Blacklist (2015), and Dr. Pauline Wilson in Limitless (2015).

In 2016, Moafi once again appeared for a single episode in Elementary as Sofia Darrow. The same year she featured in Estrella TV network's talk show Noches con Platanito (2016).

The year 2016 was perhaps the turning point in the actress' career as she began to land lead roles, most notably in the crime and legal drama series Notorious (2016). She portrayed the character of Megan Byrd for ten episodes. She followed this with the movie Quest: The Truth Always Rises (2017), playing the role of Susan.

The actress played a recurring character of Loretta in the American drama series The Deuce for two years from 2017 to 2019. She got credited for 20 episodes in total.

In 2018, Moafi starred in 10 episodes of the supernatural drama Falling Water. The same year, she appeared in a short movie The Arrangements (2018). The actress is set to appear in the film The Killing of Two Lovers (2020).

Moafi's Relationship Status - Is she dating someone? Sepideh Moafi appears to be single. There are no public records of her dating affairs. Besides, her social media provides no confirmation of her relationship status. The best guess would be she's currently available.

The actress, meanwhile, does provide a clue on her Instagram. The only relationship she carries of any sort is with her dog she adopted, an adorable puppy named Simone de Beauvoir.

Taking to her Instagram on 27th March 2019, Moafi uploaded a picture with her new pet, captioning the post - "Last week I met and I adopted my idol reincarnate. Meet Simone de Beauvoir." The rising star often posts pictures with her dog on Instagram. Her followers subsequently cannot help express their delight at the adorable pair.