Born to Afro-Panamanian nurse mother and Indo-Trinidadian father on 24th January 1979, Tatyana Marisol Ali is a well-renowned actress and singer.

The eldest sibling to two younger sisters named Anastasia and Kimberly, she is best known for her portrayal of Ashley Banks in the '90s sitcom The Fresh Prince of Bel-Air.

Ali graduated with a Bachelor's degree in political science and African-American studies from Harvard University back in 2002. Tatyana Ali is married to Dr. Vaughn Rasberry since 2016.
Source: The Knot News

Back in April 2016, Tatyana made two huge announcements revealing her engagement and pregnancy at the same time.

During an interview with Entertainment Tonight, 'The Fresh Prince of Bel-Air' actress revealed she was dating a man named Dr. Vaughn Rasberry. The girlfriend-boyfriend duo at the time was about to get married later that summer. That's not all. Ali then added she was pregnant with her first child. 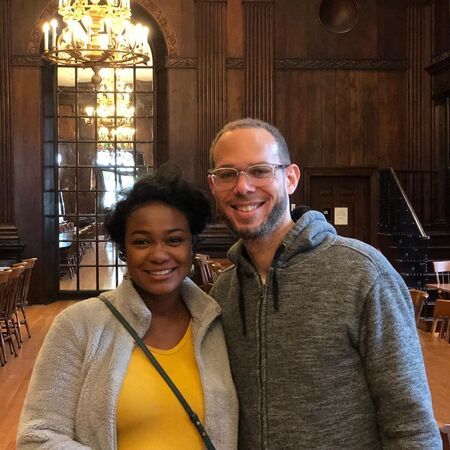 Earlier, the couple met on a dating website – eHarmony. She said,

It was my first time dating online. We wrote letters for months before we decided to Skype. And then, of course, met.

Speaking on their engagement, the actress revealed they were on a hike through the Redwoods in Yosemite where Dr. Rasberry got down on his knee in 'the most picturesque clearing'.

Just the two of us. It was so thoughtful and perfect. We're best friends. In August 2019, the couple welcomed their second kid together, another son named Alejandro Vaughn Rasberry. Tatyana and Vaughn currently live a blissful life together with their two children. Back in the '90s, Tatyana Ali was in a relationship with a highly talented actor in the peak of his career named Jonathan Brandis. The actor was considered a teen sensation in pop culture back in the day.

Tatyana and Jonathan were in love during the most successful period of their careers. The couple began dating in 1995 and remained together for 3 years. However, the duo drifted apart and broke up in 1998. Tatyana and Jonathan called it quits in 1998.
Source: Daily Mail

5 years later, tragedy ensued when Brandis apparently committed suicide. He was just 27 when he died.

Ali was no longer with Jonathan at the time, but they were still good friends. Speaking in the documentary titled Broken Dreams, Ali expressed her immense sadness as she got really emotional talking about his death. She implied his downward spiraling career put him over the edge.

When you've been on covers of magazines for years, when that stops happening, what's your identity?

Brandis's close friends shared similar sentiments. As per 'sitcomsonline', Brandis tried taking his own life, but he did not die instantly. He ended up suffering fatal injuries that took his life the following day. His mother stated he had gone out to dinner with friends. They returned to his apartment where his friends noticed him becoming increasing agitated and pacing quite a bit.

Brandis left the room while his friends were still in the apartment. After being gone for some time, one of his friends went looking for him only to find him hanging in the second-floor hallway. His friends immediately called paramedics and despite their best efforts, he was already too far gone. The actor was subsequently pronounced dead.

It's extremely tragic how the actor departed so young. Childhood actors probably need appropriate coaching on how to deal with fame at a young age and how to be emotionally and psychologically healthy when the stardom inevitably begins to fade. This could save lots of lives. Unfortunately, Jonathan could not be one of them.

The series boasted an impressive cast, most notably Will Smith, James Avery, Janet Hubert-Whitten, and Alfonso Ribeiro. Meanwhile, Tatyana was one of the leads who portrayed the character of Ashley Banks throughout six seasons.

Visit Celebs In-depth for more interesting biography and gossip of our favorite stars.