Tuc Watkins was born as Charles Curtis "Tuc" Watkins III on 2nd September 1966 in Kansas City, Kansas, to parents Charles Curtis Watkins II (father), who's a salesman, while his mother was a photographer. Besides, he's got a two years younger sister named Courtney.

The actor who attended Indiana University is best known for his portrayal of David Vickers on ABC's American soap opera One Life to Live (2013), and Bob Hunter on American mystery comedy-drama series Desperate Housewives (2007-2012).

Tuc Watkins came out as gay; welcomed twins via surrogate Life sort of imitated art for the soap star after getting cast in Desperate Housewives in 2007 where he played the role of a gay person who wanted to adopt a baby. To little knowledge of the fans back then, the plot hit close to home for the actor as he could completely relate to it outside his reel life too.

I played a gay man who was married to his husband and was trying to adopt a kid. In real life, at the same time, I’m a gay single man who was trying to have a kid through surrogacy. So life and artwork imitated each other.

Speaking during an interview with Marie Osmond on 29th April 2013, the soap actor publicly came out as gay for the very first time.

The most significant news, however, was not his orientation. The proud single dad, Watkins, revealed he welcomed twins into his life via a surrogate mother named Melissa 4 months earlier on December 2012.

The twins were named Catchen Hawkins (daughter) and Curtis Hawkins (son). Interestingly, daughter Catchen ('Catch' for short) - the inspiration for her name came from To Kill A Mockingbird’s Scout Jean Louise Finch.

Watch: Tuc Watkins Interview "Beasts of All Kinds" with Tame the Beast

Talking about his mere infant kids back then who had just learned to giggle, Watkins expressed how it's totally worth "all those midnight feedings."

Tuc had always dreamt of becoming a father, and when that dream became a reality, he couldn't have been more delighted. He explained how sure he was of becoming a parent even though some people tend to be skeptical over it. The actor continued,

And when I was young, I knew three things: I knew I was gay, I knew one day I was gonna be a dad, and I knew that Gene Wilder's Willy Wonka and the Chocolate Factory was going to be the best movie of all time.

The soap star concluded with, "so far, I've been right about all three." Life with his two children is undoubtedly going blissful for this delightful actor. On 22nd September 2019, the actor pair Andrew Rannells and his boyfriend Tuc Watkins made their relationship Instagram Official posting shirtless pictures together in the photo-sharing platform.

The duo who played onstage couple Hank and Larry in the Broadway show Boys in the Band (2018) took the initiative to change their relationship status in real life too. The show, in fact, was so well received, it got adapted for Netflix, and the duo is set to carry on their roles. The pair who had been dating for some time is also set to feature together in the second season of Showtime's Black Monday (2020), albeit not as a romantic couple this time. Rannells is an already established star in the series while Watkins was cast in the supporting role for the second season. 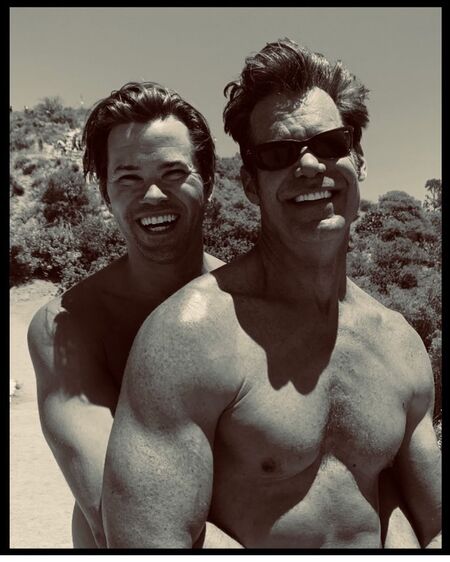 Previously, Andrew dated American actor Mike Doyle for six years before going their separate ways in 2017. Fans speculated their relationship likely reached an impasse, and it wasn't going how either of them desired.

Meanwhile, it remains to be seen if Tuc and his partner Andrew decide to take their relationship forward and embrace each other as a husband.

Details of Tuc Watkins' Net Worth Tuc Watkins' net worth is estimated to be $2.5 million.
Source: Theatre Gold

Going by the market standards, an average American actor earns $39.84 per hour, which makes it a little over $50k annually. Tuc being a bigger star than a random run-of-the-mill actor certainly earns much higher than this amount. In addition, he makes further income from his commercial endeavors.

Talking about his big-screen credits, his most notable appearance was in the American action horror film The Mummy (1999) alongside household names like Brendan Fraser, Rachel Weisz, Arnold Vosloo, and John Hannah. The film collected $415.9 million worldwide with a budget of $80 million.

Watkins' other notable movie appearance was alongside star-studded names such as Robert De Niro, Matt Damon, and Angelina Jolie in the spy movie The Good Shepperd (2006). The film, however, failed to live up to expectations as it made just $99.4 million in the global box-office with a budget of $110 million.

Taking into consideration his several acting credits in small screens as well, this veteran actor's net worth is estimated to be $2.5 million.