Let make one thing clear, out of all the hats in the world, bucket hats are ridiculous and just don’t look good. Well, it was the thinking up until the point we saw Valentina Acosta Giraldo win the 2019 World Archery Youth Championships in Madrid in the under-21 recurve category.

A bucket hat, sweet smile, different colored hair parted at the top of the head, a Colombian flag hanging from the quiver, and a lot of badges decorating the quiver also, this is how Valentina stepped up to the white line in Madrid and won everyone over. She was not doing it all to seek attention or be noticeable; there is a reason for everything she does, and just the reaction from the losing Mexican finalist shows how amazing of a lady Valentina is. 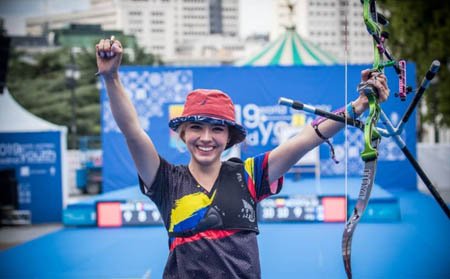 Mature beyond her age, she became the first Colombian to win a gold medal in World Archery Championship to win with a recurve bow. To think now she was contemplating quitting archery for her studies is something unimaginable. 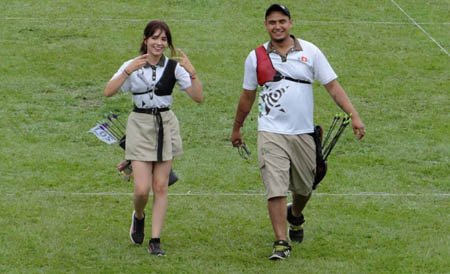 Valentina Acosta Giraldo took up archery when she was young.
Source: Instagram

Valentina Acosta Giraldo was born after the turn of the century in 2000, and she is only 19 years old now. She was born in Colombia to loving parents who always took care of her and were supportive of every decision she made.

Dedication and hard work were things ingrained in her from a pretty early age, and when she was taken by archery, her parents were there to help her get what she wanted. She talked about how people were not happy about the choices she made, but her parents and family were always there to protect her and shield her from the outside world while she goes out and learns how to be the best in the field of her choosing. “Do what makes you happy and what you love,” is what her parents told her. 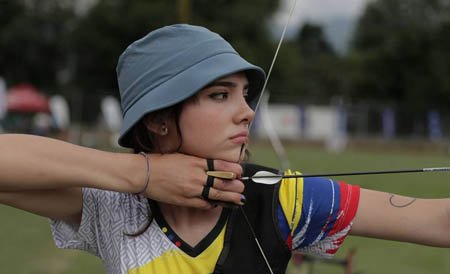 Valentina Acosta Giraldo has a heart tattoo between her right bicep and triceps.
Source: Instagram

But before she was off to Spain winning the gold, two years ago she was at the crossroads of where she was in life and which path she wanted to take to be where she wanted to be. She graduated high school at 17, and there she was looking at her life and thinking about what to do. Valentina was stuck between taking the sports up permanently, splitting time between training and studies, or just focus on studies.

At this moment, Valentina went with what she loved most, and the pull of the sports was greater than the knowledge of the books. She took up archery, and soon, she was on the international stage, making history.

Winning the Gold in Madrid Before Valentina became the first South American since 2013 to win the world championship, she went through a lot of hard work and training. After deciding to continue on her path of Archery, she joined the national team and was trained by the coaches there.

She woke up early every day, and by eight, she was ready for training in the camp. For four hours, varying levels of training were done, and before she went to the World Championship, her training was ramped up to twice a day, and when the announcement was made in Madrid, all the hard work and training paid off big time.

Watch: The final match between Valentina and Ana

In Valentina’s route to the final, she went through archers from France, Korea, Germany, and finally met the Mexican finalist Ana Paula Vasquez in the last round. In the finals, she started off with two tens and one nine and never looked back a single time after taking the first set.

After taking the gold medal, Valentina said, “I don't remember much what I felt, I was in another world; I thought, I will not have more nerves, I can rest, be a person again. I wanted to go out and call my parents, ask them if they had seen me.”

Now, she’s set her eyes on the Olympics, and if her aim is as true as it was during the finals at Madrid, then soon we will be seeing the talented archer in Japan taking on the best of the best from all over the world.

Is Valentina Acosta Giraldo in a Relationship? Valentina is focused on her career and not getting romantically involved with anyone.
Source: Instagram

Valentina is training in the morning she is going to classes in the day, and there is work from the college she needs to get to in the night. As you can see, there is extremely little time for the young archer when it comes to enjoying a little bit of social life.

The under-21 World Champion does go out with friends, and she loves Rick and Morty (as if we couldn’t fall in love with her more) and she considers herself a Morty. But when it comes to falling in love with a real person and not a cartoon, she is not ready to nock the arrow just yet. 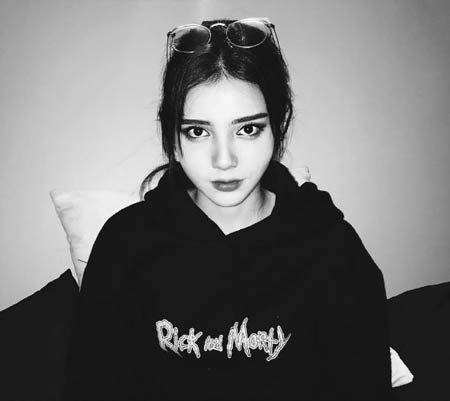 It does seem as though the young archer is single and not really ready to get into a relationship. She chose archery as her future, and romance will find its way later on in life, career is one thing you cannot miss out on the opportunity to make it as big as you possibly.

Valentina is currently focused on her career and making sure she is on the plane, leaving for the Olympics; love and romance are not in the itinerary for Valentina right now.

What is Valentina’s Net Worth?

Valentina is making her career in archery and making money from the sports.
Source: Instagram

Valentina’s look is awesome, and her lifestyle is better than nice, but the thing is, she is still only 19 years old. Her career is earning her some money, but as you probably would’ve noticed, there is not much money is archery. Still, Valentina is Instagram famous with nearly 20k followers, and she is a celebrity back home in Colombia. So, her net worth is probably in the range of $40,000 to $70,000.