Four Emmy Wins, one Oscar’s nomination and one Grammy nomination later, Alfre Woodard, born on 8 November 1952 in Tulsa, Oklahoma, is one of the most respected and sought after actresses currently working in Hollywood. From working in Off-Broadway play in the late 70s to now appearing in one of the most expensive series in the history of television, SEE, it’s been a long and illustrious career for the former Hill Street Blues actress.

After a successful theatre career, the actress moved on to movies, and her first film was Remember My Name which was released in 1978. Then came the 80s and with it came Cross Creek which earned her an Academy Award nomination and also ushered in sustained TV success. Alfre Woodard will next appear in the Apple TV+ show SEE.
Source: The Wrap

The actress appeared in numerous movies and shows, 120 credits to be exact, including being one of the only actors to appear in multiple Marvel movies. The career is beside the point though, and she will tell you the one person who’s always been in her corner for almost 40 years, and it was her husband, someone who’s been on her corner for the better part of her career and life. The union between the two lovebirds was not something common; the thing is Alfre is of African-American ethnicity, and Roderick Spencer is of white ethnicity. The union of the two races was not something people looked kindly upon and considering the fact it is still not looked upon kindly in some parts of America, imagine a marriage between the black and the white ethnic people in the early 80s.

The black person is going to be scrutinized by their own race for going out and marrying a white man, and we already know the relationship between white and black people in America. This was the reason why her marriage in 1983 was scrutinized both by her and the white community; they were the butt of the jokes and extreme mockery for the two on deciding to choose one another. This is just shameful, but she was an aspiring actor who only appeared in a handful of movies, and he was a writer who was also starting in his career — may be just easy targets for people to feel good about themselves. Alfre Woodard and Roderick Spencer’s marriage was scrutinized when they got hitched.
Source: Zimbio

Woodard always claimed how helpful he was in her career, and she once claimed the day she was born was the first time she fell in love with Roderick. Melts your heart, doesn’t it? Pretty rare to find true love like this and even more wonderful is the fact, this was born and made strong by all the hate, anger, and mockery people felt towards her relationship with her husband.

Watch: Alfre Woodard talks about her husband writing the movie Juanita for her in the Rachael Ray Show

The actress was promoting her movie Juanita, which was a Netflix production and Alfre spoke of the fact it was her husband who wrote the film, just for her and in an interview with Rachael Ray on the Rachael Ray Show, the actress lauded and gushed over her husband. The actress said she asked her husband to write the script and she doesn’t need a single anniversary, birthday or Christmas Presents, all she wanted was for him to write her a script and he did, and she went crazy for it.

No matter how the relationship started, the two are enjoying a long and blissful married life which is all a person could ask for, someone to spend the rest of their lives with and Alfre got exactly the thing in Spencer.

Two Children of Alfre and Spencer; Both were Adopted 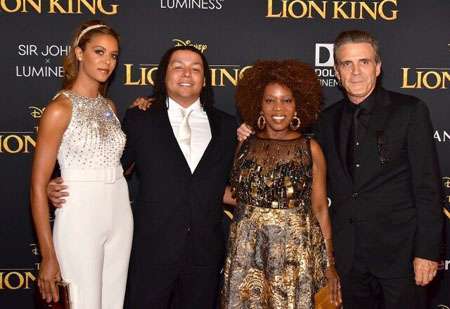 The two decided to get pregnant a long time ago, but it was not happening, and then the couple decided the best way to be parents is to adopt a kid which they did in around 1991 when they brought home a little bundle of joy, daughter Mavis, who is 28 years old. This was followed by another adoption which the husband and wife carried out three years later, and Duncan was brought into their lives, he is 25 years old now.

Even though they are adopted, the married-couple never made them feel as though they were and raised them. Today the kids are grown and were seen on the red carpet of The Lion King with their parents who couldn’t be prouder of their two kids.

Apple TV+ was mounting one of the most ambitious projects in recent memory when it comes to the small screen. So they got the best people involved in what is sure to become their flagship programs. Steven Knight on Peaky Blinders wrote the story and Francis Lawrence was brought in to direct but the most important aspect of the show, the talent on screen, was also top-notch hiring. Hera Hilmar was hired to play Maghra, Jason Momoa was brought in to play the leading role, and Alfre Woodard was also hired to co-star in the show and play the character of Paris.

Paris is one of the tribespeoples of Baba Voss, and she decides to side with the warrior in their quest to protect the first seeing children in the world. After 600 years, the power of sight was back, and some people who believed god took the sight to protect the earth were not keen on seeing a human get the power back and bring the earth to the brink of destruction again. This is the core conflict of the show, and Paris will play a key role in the lives of the kids along with Baba Voss and Maghra.

Watch: The trailer for the first season of Apple TV+ series SEE

This is one of the biggest productions in TV history, but this is not the only appearance in huge production for the actress. She recently voiced the character of Sarabi in the live-action remake of The Lion King; then there was her second appearance and second character with Marvel when she played Mariah Dillard in the hit show Luke Cage. She also appeared in Empire and was the driving factor of Tony Stark signing the Sokovia accords after her character Miriam confronted him and asked who is going to avenge her son after the heroes were the ones who caused his death.

There was the noteworthy performance in the Oscar-winning movie 12 Years a Slave and also appearances in Memphis Beat and Three Rivers. For other notable performances by the actress, check out her IMDb page which is filled with iconic performances in both movies and TV.

Visit Celebs In-Depth for more gossip and biography on your favorite celebrities.