Benjamin Atkinson is the son of the beloved comedian Rowan Atkinson and his ex-wife, Sunetra Sastry. He was born on 9 September 1993 in England, but unlike his father, Benjamin chose not to go into show business; instead, he decided to serve his country and recently joined the Gurkha Army as an Officer.

Rowan Atkinson is a popular man; he is one of the hilarious British comedians there is and his character of Mr. Bean is known all over the world. Some people probably don’t even know the name of the comedian and just know him as Mr. Bean. The popularity of the character brought recognition and fame to the actor who was slightly successful in the early days, but Mr. Bean catapulted him over international success. 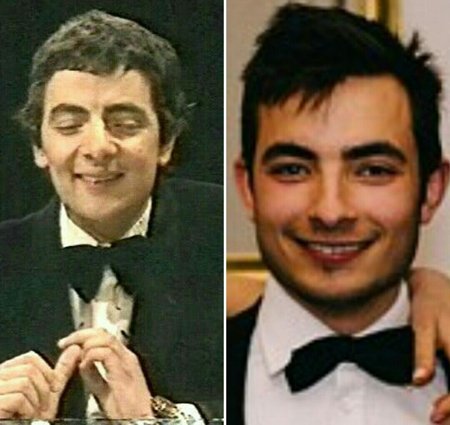 Benjamin was born right around the time the success of Mr. Bean was slowly taking over the world, and by the time he could walk and talk, he saw his father on TV, and this must’ve influenced the young mind of the little kid. Instead, he chose the path of service and went to the Military academy then headed to Nepal to learn the language and culture of the people living in the little land-locked country.

Coming to Nepal and Becoming a Member of the Gurkha Army

Members of the Gurkha Army were tasked to secure the summit between Kim Jong Un and Donald Trump.
Source: ABC

Gurkha Army is one of the most illustrious and collection of some of the bravest soldiers on the face of the earth. The young boys from the hills of Nepal are sought after by almost all the military in the world. During the most recent trip of Donald Trump and Kim Jong Un to Singapore, the Singapore Police deployed the Gurkha Regiment of the country's force, and they were there securing the streets of Singapore and the hotel where the summit was happening.

The soldiers in full body armor and FN SCAR combat assault rifles were there, but one striking detail among the soldier was their knife, or Khukuri shall be said. The legendary tribal weapon, which is carried by all Nepali soldiers, is as much a weapon as it is a tradition of the Nepali warrior ancestry. The use of the weapon dates back to the 1810s, during the Anglo-Nepal war, where armed with nothing but a naked Khukuri, 74-year-old Bhakti Thapa charged the cannons of the British. Benjamin getting "tika" on his forehead after becoming a Gurkha officer.
Source: The Gurkha Brigade Association

After two years of battle and seeing the bravery of the Nepalese soldiers, a treaty was reached, allowing the young boys from Nepal to join the services of the UK army, and they were given their own regiment in the British Army. Benjamin Atkinson wanted to know the history of the country, the language of the people he was going to serve with, and the culture of the soldiers he was going to break bread amongst.

Benjamin arrived in Nepal in February of 2019, and they were taken to Pokhara, where the recruitment process of the Gurkha Army takes place. Every year 30,000 prospective candidates come to join, and only 200 are selected in what is one of the toughest selection processes. Since he was learning to be an officer of the Gurkha Army, Benjamin took to books and also some training. According to The Gurkha Brigade Association, the son of Mr. Bean took to the Nepali studies pretty quick, and the reason given for it was pretty sly. “Lt. Atkinson grasped the language remarkably quickly. This may be attributed either to his language experience, having studied both Arabic and Spanish previously," they wrote. “or to his urgent requirement to learn the local Nepalese ‘chat-up’ lines. Learning some Nepalese dance moves was also a personal priority, and Lt. Atkinson was quick to establish an impressive “uthyo basyo” (an up-down rapid squatting dance-move).”

After three months of language and cultural training, the soldier was one of the Gurkhas and took his place in the role of a Gurkha officer.

Benjamin's Education and Getting Accepted in Royal Military Academy Sandhurst Benjamin enrolled in his high school, where he gained basic knowledge and then moved off to the University of Exeter to get some college education. Then, Benjamin announced on Facebook; he got accepted into the reputed Royal Military Academy Sandhurst, where some of the British Royal family members got their education and military training including, Prince William, Prince Harry, Prince Henry, and Prince Edward.

The place is as big as they come to England, and getting enrolled in the reputed college was a huge deal. He got in the 44-week long program, and after while in the institute as an officer in training, he was one of the honor guards of the French President Emanuel Macron and British PM Theresa May, during their visit to Sandhurst. Benjamin Atkinson in a photo with President Macron and Prime Minister Theresa May.
Source: Daily Mail

Benjamin was in the picture with the two leaders of the neighboring countries who were attending the 35th United Kingdom-France Summit. It was also the first visit to the UK by President Macron as the leader of France.

The Parents of Benajmin Atkinson and Sibling

Benjamin is the son of Rowan Atkinson and Sunetra Sastry. His father, we’ve talked before, is a famous comedian and actor. His mother was a makeup artist in show business, and while working in the TV show Blackadder, the actor, and the makeup artist fell in love.

Sunetra is of British-Indian heritage, and she married Rowan in February 1990, and Benjamin was born three years later, followed by his little sister Lily Sastry (before Atkinson). The couple lived together with their children, with Lily taking her footsteps in the show business, appearing in a couple of her father’s movies.

What was the Reason for Benjamin’s Parents Getting Divorced?

Rowan and Sunetra were married for almost 25 years when the couple called it quits. The reason was simple; there were rumors the actor was engaged in some extramarital affair with actress and comedian Louise Ford. Sunetra and Rowan separated in 2014; at the same time, he was allegedly seeing Ford, and then their divorce was finalized on 15 November 2015.

The alleged relationship and after Rowan fathering a child with the actress Ford was also considered the reason why Lily changed her name to Lily Sastry, but it seems any differences between the father and daughter is now over after she was seen at the Johnny English Strike’s Again premiere with her father.

Is Benjamin Atkinson in a Relationship? Benjamin Atkinson is not in a relationship; there is no wife or a girlfriend in his life.
Source: Daily Mail

The military man is totally silent when it comes to social media, with the occasional use of Facebook. There do not appear to be a lady in his life but according to the newsletter from Nepal which gave him the nickname “The Hound,” the actor was quick to learn the local language to hit the chat-up lines, so it seems there is a little flirty nature to the son of Mr. Bean.

As for a girlfriend or a wife, it seems the Lieutenant is focused on his military career right now and kicking the relationship baggage, a little further down the road.