Lily Sastry (formerly Lily Atkinson) is most popular as the daughter of the Mr. Bean star Rowan Atkinson. By profession, she’s an actress, a singer as well as a burlesque dancer.

The British actress was raised by her parents in the countryside, where they owned numerous homes, most notably in Northamptonshire and Oxfordshire. She has one sibling, an older brother named Benjamin Atkinson who is a Gurkha Army officer. As for her education, Lily graduated from a boarding school in Oundle, Northamptonshire. 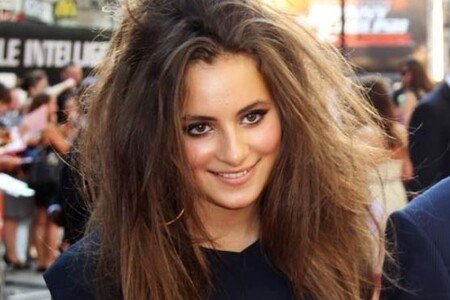 Sastry’s first taste in the entertainment industry came as a child actress. Her debut film was a children’s movie Tooth (2004), where she played the role of a New Recruit. The Christmas film tells the story of a young Tooth Fairy from a Fairytopia world who can no longer use her magic.

The young actress subsequently played minor roles in her father’s movies, Mr. Bean’s Holiday (2007) playing Lily at the Stereo and Johnny English Reborn (2011) portraying Girl with Crash Helmet. Her only other acting credit is the role of Amy in the short film The Fifty Cent Smile (2014).

Lily Sastry decided to pursue a career in Cabaret after she got fascinated by it. Her first big performance was a show held at a renowned supper club in London named The Pheasantry.

Prior to her performance, the former actress took the time to greet the audience. She said,

After a successful debut performance, the skilled dancer then starred in West End cabaret show Lily for a couple of nights in 2016. The one-woman show was accompanied by a live stage performance from a musical band.

Speaking during an interview, Lily stated:

Vocally, I am better than I have ever been; physically, mentally — it’s the hardest I have ever worked on a gig.

The singer added, she’s relishing the challenge she put herself into. Shedding further light on her performance background, Sastry revealed she had always been a writer, but it was only during her early teenage years she actually began to write music.

The multitalented personality loves writing stories and poems, as well as soothing melodies. She claims she quickly figured out what she wanted to do in her life following her short stint as a singer and performer.

Why did Lily Atkinson change her name? Lily Atkinson changed her named to Lily Sastry in 2015.
Source: Who Magazine

Lily is yet to publicly confirm the reason she opted to drop her father’s surname for her mother’s. However, it appears as no coincidence that she decided to do so following the news her father is expecting his third child with a woman who was over thirty years younger than him.

A source told Daily Mail at the time,

It’s a real mystery. Atkinson has been Lily’s name all her life, but she’s now dropped it and is styling herself as Lily Sastry. I hope she hasn’t fallen out with her dad. The divorce was really hard for everyone in the family.

Sastry took the bitterness up a notch and erased every trace of her father from her social media accounts.

Despite what appears to be a fall out between the father-daughter duo, those rumors were swiftly quashed in October 2018 when Lily accompanied her dad during the celebration of Johnny English Strikes Again premiere at the film’s afterparty.

Why did Lily Sastry’s parents divorce? Back in 2015, news broke of the split between Rowan Atkinson and his make up artist wife, Sunetra Sastry. A year earlier, Atkinson’s 24-year married life with Lily’s mother, Sunetra, was on the verge of collapse after reports began to claim the actor has a new woman in his life.

The mystery woman was none other than actress Louise Ford – the mother to the actor’s third child – who he met in 2013 while both of them appeared in the West End Comedy Quartermaine’s Terms. However, it reportedly took two years for their romance to take off. Lily does not appear to be dating anyone at the moment. Although her fans are eager for her to welcome a new boyfriend (or possibly a husband) in her life, she seems fully engrossed in her career. Moreover, she prefers to keep her love life private away from the eyes of the media and the public.

Sastry’s sparse social media activity does not provide much indication of her dating endeavors either. Meanwhile, her Instagram account is deactivated since her parents’ separation. For now, the best bet would be she’s enjoying the single life. Playing the role of Mr. Bean, fans tend to believe Rowan Atkinson is the same person in real life, too. This created a viral meme on the internet whereby fans expressed their shock at just how beautiful Atkinson’s daughter turned out to be since they perceived her to be similar to Mr. Bean.

Lily is, no doubt, gorgeous, and fans couldn’t help themselves share a bit of banter on the internet. Even one of the Google searches related to the actor is ‘Rowan Atkinson daughter meme,’ which is kind of hilarious in itself.