The actress attended a theater school in Paris prior to joining Stephane Gildas’s program in Tolbiac. She then enrolled in Berengere Basty’s program at the Art’aire studio. She worked casual jobs (clothes, telemarketing) to pay for her acting classes.

Stars as Amira in the Netflix musical drama ‘The Eddy’ (2020)

Created by Jack Thorne, The Eddy is a French-American musical drama miniseries set in Paris. The direction for an initial couple of episodes is provided by Damien Chazelle while the writers are Glen Ballard and Randy Kerber.

The show comprises of conversation primarily in English, but it also includes French, Arabic, and Polish. As per Netflix, the premise reads:

The Eddy is an eight-episode drama taking place in modern-day Paris’ diverse multicultural communities. Formerly a renowned New York jazz pianist, Elliot Udo (Andre Holland) is now the co-owner of the struggling club The Eddy, where he runs the house band led by singer and on-off-again girlfriend Maja (Joanna Kulig).

As Elliot’s distressed adolescent daughter Julie (Amandla Stenberg) arrives unexpectedly to stay with him in Paris, his personal and professional lives soon begin to crumble. Leila Bekhti is playing the role of Amira, the wife of Farid (Tahar Rahim) in the Netflix series The Eddy. The rest of the main cast includes Adil Dehbi as Sim, Randy Kerber as Randy, Ludovic Louis as Ludo, Damian Nueva Cortes as Jude, Lada Obradovic as Katarina, and Jowee Omicil as Jowee. 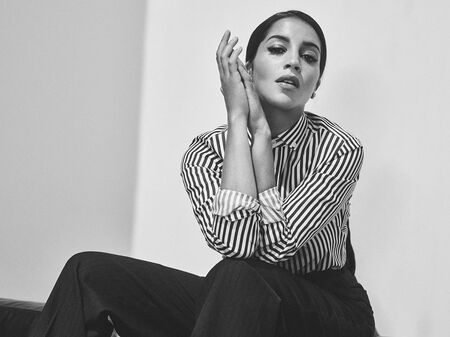 Leila Bekhti’s net worth is estimated to be $1.5 million.
Source: Bekhti Instagram

Back in 2005, Bekhti’s friends convinced her to go along to the casting for Sheitan, the 2006 romantic comedy/horror of Kim Chapiron where a group of friends finds themselves in a weird country house accompanied by a satanist on Christmas Eve. She ended up landing the role of Jasmine alongside Vincent Cassel. The movie received critical acclaim while her performance was applauded.

It was her performance in Un prophète (A Prophet) by Jacques Audiard in 2009 that finally made the French film industry begin to take notice. The film went on to win nine César Awards and the Grand Prix at Cannes.

This was followed by the surprise hit in 2010 and Bekhti’s astronomical rise to stardom – Tout ce qui brille (All That Glitters). The sassy comedy of two mates of modest roots, Lila (Bekhti) and Ely, who are passing away as Parisian socialites, was an outstanding hit. The movie won a whole host of awards, including the César for Most Promising Actress for Bekhti, cementing her status as one of the top stars in the industry.

The actress most recently featured as Amanda in Gilles Lellouche‘s French comedy film Sink or Swim (2018). Based on a true story, it tells the tale of a group of middle-aged men coming together to create a synchronized swimming squad. And unsurprisingly, she was once again nominated by César for Best Supporting Actress.

This admirable personality has succeeded in achieving a great deal for someone who thought she wouldn’t accomplish much in life. Meanwhile, Leila Bekhti’s net worth is estimated at $1.5 million. Leila Bekhti is married to actor husband Tahar Rahim since 2010. The actress first met the Algerian-French star while filming A Prophet in 2007. The couple shares a son named Souleymane Rahim, born in 2017.

As per Vogue France, this wonderful pair is expecting their second child sometime in 2020. The news was shared discretely to protect their private life.

Back in November 2019, Tahar Rahim revealed about how ‘the distance is sometimes unbearable’ talking about his relationship with Leila.

Meanwhile, Tahar and Leila are currently sharing the screen as the husband and wife duo, Farid and Amira, in the latest Netflix series The Eddy.

Advertisement Coming from a home… Phoebe Dynevor as Daphne in Bridgerton – 5 Quick Facts!