Born in London to Spanish and Colombian Parents, Lorena Andrea is Forging Her Path to Stardom Lorena Andrea knew she wanted to become an actress from a young age, and after she turned 18, the actress was performing on stage, trying to make her dream a reality. In 2012, the actress appeared in a play; she became a model, appeared in commercials, and finally got her chance to show off her talent in TV shows and films. Nearly a decade into her career, the actress is starring in a Netflix series, sure to make her a recognizable face among many Netflix subscribers.

Warrior Nun is the latest Netflix series, which follows the exploits of a secret society within the Catholic Church, made up of Nuns who battle demons and protect the earth. The show is based on the comic book of the same name created by Ben Dunn from the late 90s. Warrior Nun has an all-female cast with Simon Barry creating the show for Netflix and directing two episodes. The show was filmed in Spain, primarily Malaga, where the cast spent nearly three months filming.

Lorena Andrea plays Sister Lilith in the Netflix series Warrior Nun. Sister Lilith is a legacy Nun, someone who was admitted into the order due to her prominent and elite family's reach and service to the Nuns. Her legacy status also causes her to overstep boundaries and show off her entitlement, which does not go down well with her Sister Nuns. But no matter her entitlement, Sister Lilith is devoted to her beliefs when it comes to being a part of a secret society tasked with battling evil. Warrior Nun follows the resurrection of a recently deceased 19-year-old Ava, who is brought back to life after the church uses a religious artifact called the Halo to grant her powers. When the Halo is inserted in her back, Ava becomes the champion of heaven against the evil forces of hell, but her newfound freedom and past naivety causes her to stumble into trouble and jeopardize the existence of the Sister Nuns.

Lorena Andrea Started Her Career with the Movie Jesters Lorena Andrea started her acting career on stage before moving to commercials and movies.
Source: Spotlight

The multi-lingual actress Lorena Andrea started her acting career with the movie Jesters. Before appearing in the movie, the actress had appeared in commercials and stage plays, but her end goal was always to shine in front of the camera, whether it was in TV shows or movies. After appearing in a few award-winning short films, the actress formally started her movie career with the role of Sofia in the film Jesters.

The Sister Lilith actress was cast in the movie in 2016, but the film did not come out for the next two years. Her first American movie was No Man’s Land, where she starred as the female lead Lotsee and with the release of Warrior Nun, the actress is hoping for more opportunity in Hollywood.

Get to Know Lorena Andrea 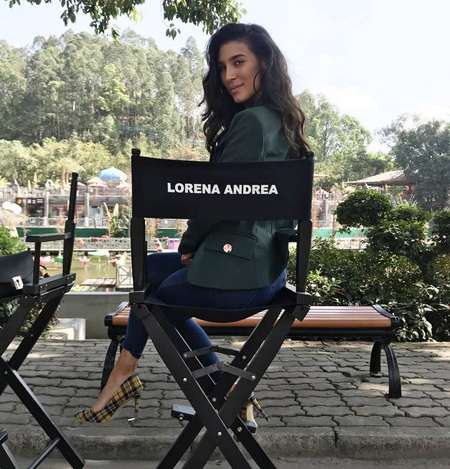 Lorena Andrea was born on 12 April 1994 in London, England, to her Spanish and Columbian parents. She always had the desire to be in the show business, and after finishing high school, the actress attended Anna Scher Theatre School in London to sharpen her skills. To gain experience, Lorena appeared in short movies, stage plays, and commercials.

The Sister Lilith actress is sporadic when it comes to her social media presence. She is currently using Instagram but only to promote her role in the new Netflix series Warrior Nun. Lorena has over 2,500 followers on her Instagram page, but the actress is unlike most stars; she loves being low-key, something in contrast to her character Sister Lilith.