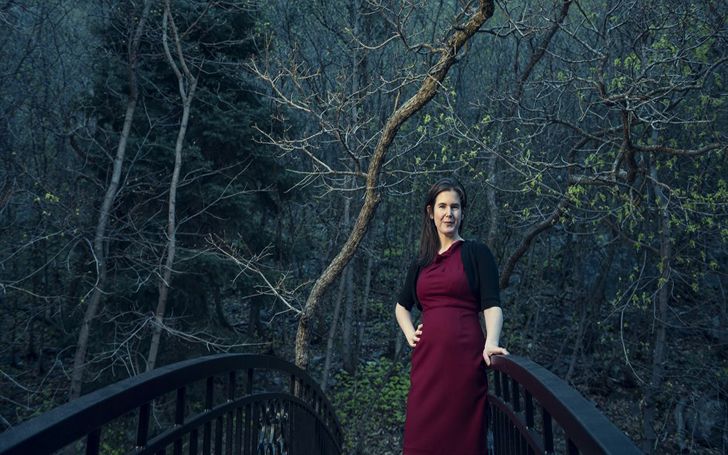 Nicole Cliffe was born on 2 September 1982 in Kingston, Ontario, where she spent most of her early life and only moved to America to get her higher education. Nicole was a funny child growing up, something you can see in abundance when it comes to her writing. She is currently living in Utah with her husband and two children.

The future founder of one of the most exciting sites of the 2010s, The Toast, got her journalistic and writing bone while growing up but honed her talents while in college. She attended Harvard, where she was given a full ride, and Nicole utilized her scholarship to study English, which she described was not much fun the first year and a half. Nicole Cliffe is a writer, editor, and producer who is living with her husband and children in Utah.
Source: Symphony Space

An outspoken feminist, who enjoys a massive following on social media, and caters to her thousands of loyal supporters (a group, some even call, a “shame-mob”). The massive twitter “shame-mob” was involved in few scandals where Nicole sent her followers after other people, whether rightly or wrongly and something as recently as this October where Nicole accused Jeff Goldblum of sexually assaulting women. But before all of it, before getting into writing, she worked at a hedge fund, coming out of college.

Early Career of Nicole Cliffe and Launching 'The Toast' Nicole graduated from Harvard and worked at a hedge fund.
Source: Instagram

After graduating from Harvard, the highest paying job she received coming out of college was a hedge fund. She explained the writing job offers were not much when it comes to the amount being transferred to her bank account, which is why she chose to work for them as a person who takes new people coming for interviews, for lunch.

Nicole, also stated, her love for the job because they were lenient when it comes to almost everything work and vacation related, but then when the recession hit, she was not feeling the job anymore, which is why she moved on to writing. The writer was gaining some traction on the internet about her book review, which allowed Awl-network to take notice, and then she became the book editor for The Hairpin, which is how she met her future collaborator and partner Daniel Mallory Ortberg. The two future partners met over the internet and then in person, which was the foundation of their work together in the near future.

The duo started the feminist internet website The Toast in 2013, which they co-founded and became partners. The site was a huge success, and it was getting more than 1 million unique visitors per month. The success was also able to get a spinoff site online, but the site ceased operation on 1 July 2016 when the site was shut down for monetary reasons.

Since the shuttering of the site, Nicole worked as a freelance writer while also writing advice columns on Slate and living with her husband and kids in Utah.

There is not another celebrity in this world who is loved and revered by a wide assortment of fans of all age groups, race, culture, and creed than Jeff Goldblum. His chill guy mentality, childish behaviors, the cool dad-vibe he emits is infectious and charming without being pretentious. Jeff Goldblum is a god among nerds and meme culture, and Nicole took to Twitter on 3 October 2019 to accuse the Hollywood star of sexual assault.

The tweets by her are still up on the site, and the first time she wrote about the Goldblum saga on 3 October she sent out, “No one is excited about this one, but your boy J*ff G*ldblum also has some shit that we may or may not ever hear about.” She then went on to explain how she heard from two different people about shady incidents, and then wrote she would delete if the Jeff Goldblum “stans” show up. Nicole returned 13 days later claiming she received emails detailing the assault which were not made public.
Source: Substack

The tweet and comment storm did not end there; she then asked other women to come forward with their story and email her so she can point them to a reputable journalist. What she heard from the two women, the evidence to support such a smear campaign was not revealed, and she went silent on the matter for 13 days when the writer came back with other rounds of inflammatory comments on the actor.

On 16 October 2019, Nicole again wrote to her, over 150k, followers about the alleged assault. She tweeted, “Oh boy did I come home to a lot of emails from women w J*ff Goldblum Stories.” Then she started commenting about how the stories were worse, one after the other, all while not giving one single shred of evidence of the alleged assault. It’s her word, and it was a public trial of a man who didn’t even know what was going on.

Nicole Cliffe called Jeff Goldblum a bad person but did not provide any evidence to back her claims of sexual assault.
Source: Substack

One of the people on her Twitter asked for proof, and all Nicole shared was, “He’s a bad person, and it’s been whisper networked for years, but he’s so adorable and charismatic no one wants to be the first extremely young woman over the wall.” If you are confused about not seeing a single shred of evidence there, well, there’s not any for you to see.

Maybe he did assault some women, and there is a right way of going after abusers than just putting them on blast on Twitter with unfounded allegations, which are not sourced. But not the first time she did something like this, and the cult-like following of her on Twitter are the real stans who take her words for face value, whether true or false.

Jeff Goldblum was accused of sexual assault by Nicole Cliffe.
Source: The Times

This type of unfounded allegation is not something new to the writer, who almost destroyed another person’s life by accusing them of being “creepy.” This is probably her third or fourth time of mobilizing the massive mob to shame and guilt people out of existence and make their lives a living hell.

Jesse Singal was another person who was accused of unwanted sexual advances by Nicole Cliffe; again, without any evidence.
Source: Substack

Jesse Singal is also a writer who was recently accused of sliding into trans women DMs and asking them to get coffee and meeting in person to the point of making them need to block him on social media. On 18 June 2018, Nicole sent out a tweet saying Jesse was “O B S E S S E D with trans women!”

Was there any evidence to support her claim? Again, the same thing, she got some sources, and no evidence was released to back her claim. The tweet is now deleted, but the damage was done, there were people coming out claiming to be one of the victims of Jesse. None provided proofs while Jesse showed all the screenshots of the DMs, but still, the stans were there; the cancel culture mob was out for blood, and Jesse's career was in jeopardy. Nicole Cliffe said she received emails of wrongdoings by Jesse Singal but this was, again, all unfounded allegations.
Source: Substack

But after seeing Nicole’s claim were all pulled from thin air and unreliable sources, Jesse was able to get back to his job without the massive sword of false allegation hanging over his neck.

Nicole is a great writer, and her voice is important to thousands of people all over the world, but there needs to be a certain amount of accountability when it comes to using your voice to ruin other people’s careers. She’s been right more often than not, but the inherent lack of remorse is not helping but hurting real victims’ fight against real abusers and not some phantom case, which was pulled from thin air because she does not like the person.

Nicole Cliffe, Her Husband and Children, and Claims of Being Bisexual Nicole got married to her husband, and after she quit her job at the hedge fund, the couple moved to Utah. The husband and wife were working from home, which allowed them to uproot their lives and move to the state. They are also the proud parents of three children whose pictures Nicole posts on Instagram from time to time. There is no detail as it concerns the time and date they got married.

While Nicole was never known to be involved with a female, there was no female love interest in her life; she claims to be bisexual. Nicole is married to her husband, and she also identifies as a bisexual.

Before you leave, make sure to visit Celebs In-depth for Biography and Celebs Life.