Coming into his professional career, Patrick Cantlay was one of the most successful amateur golfers. Holding the rank of number 1 for 55 weeks his record was only broken in 2016. His lower level success has somewhat continued on to a career as a pro and this week the player grabbed his fourth PGA title at Memorial Tournament. The golfer celebrated the win with his girlfriend, Nikki Guidish, and it has led fans to find out who she is along with their relationship details.

The California native Patrick Cantlay was born on 17 March 1992, to his parents in Long Beach, California. He was one of four kids of his parents and by his senior year in high school, golfing talent of Patrick was evident for all to see. Golf also meant he got into UCLA and played at the college level while garnering plaudits for his game as well as winning individual awards as an up and coming young talent.

After two years in college, the writing was on the wall, Patrick Cantlay forgo the final two years of his college education to ply his trade with the big boys of golf. Rookie pitfalls, injuries and personal tragedy slowed Patrick's progression at the PGA level but by 2017 he was back on track winning his first tour title. In 2021, he has four titles to his name, the recent one caused a lot of fervor as the player was see arm in arm with his beautiful girlfriend.

Patrick Cantlay is Dating His Girlfriend Nikki Guidish in 2021 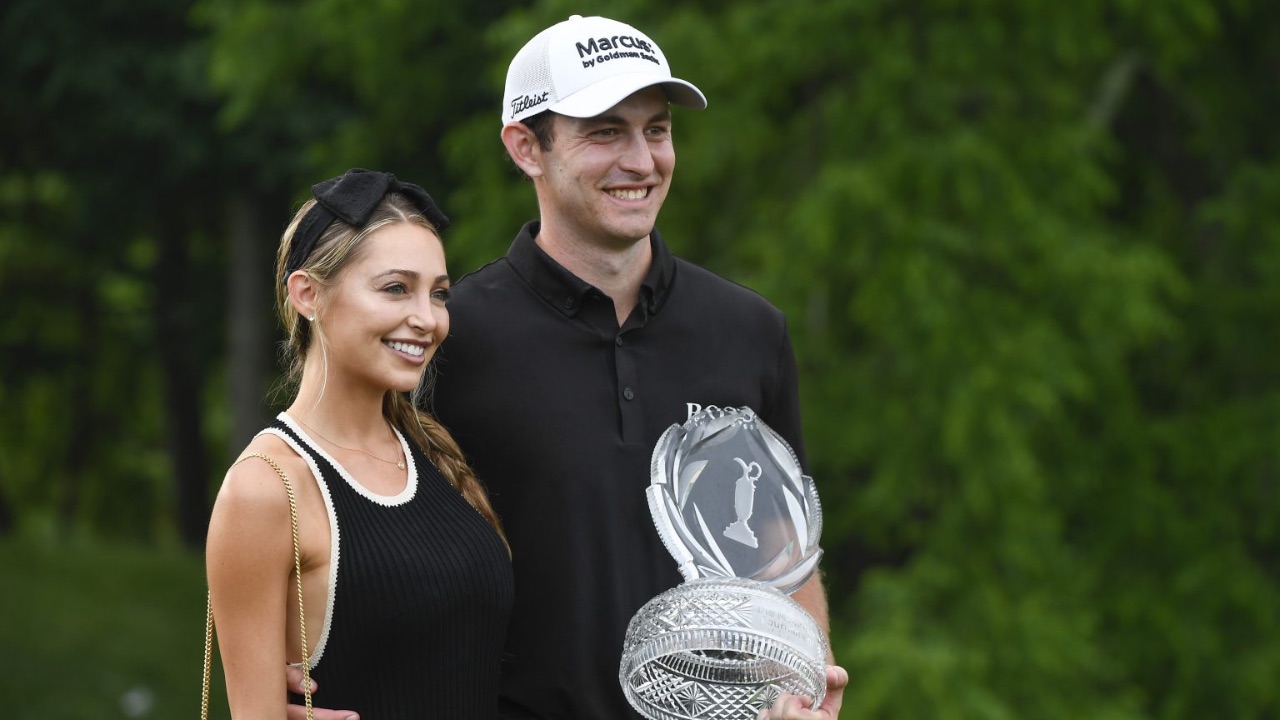 Patrick Cantlay and his girlfriend Nikki Guidish are dating in 2021. They were together to celebrate Patrick's Memorial Tournament win.
Image Source: PGA

Patrick Cantlay has been in the eye of the public for some years now and for the longest of times people have wanted to know the dating history of the player. From his laying next to a pool surrounded by ladies or just pictured with a beautiful female. Till now the player had remained tight lipped about his relationship status but Memorial Tournament final did not follow the past trend.

Instead of just celebrating by himself the golfer brought out his girlfriend as the two stood on the green holding the trophy. His girlfriend with model looks turned some heads and people are searching to know more about the couple. So, here is everything we know about Patrick Cantlay and his girlfriend Nikki Guidish in 2021.

Partick Cantlay is dating his girlfriend Nikki Guidish in 2021. They have together for less than a years, or so the reports suggest. Before 2021, Nikki was never mentioned with Patrick but it appears the couple decided to use Memorial tournament to announce their relationship to the world. Even though the player won his fourth PGA Tour title, fans were determined to find out more information about Patrick's girlfriend.

Patrick's girlfriend Nikki is a Pharmacist in Charge who studied pharmacology at USF College of Pharmacy. She is also a social media star with a growing number of follower on her Instagram page. Nikki shared pictures of the duo together after the win at Memorial Tournament. She captioned the photos, "Nothing short of a memorable weekend ⛳️."

While Patrick is yet to update his Instagram page, his girlfriend has enjoyed her boyfriend's win. Nikki had been previously been pictured with other wags of golf stars so moving in similar circles was where the couple met for the first time. But it has to be said, the couple is has not dated for more than a year in 2021. Their relationship still appears to be in its first leg.

We are likely to see Nikki at more golf tournaments of Patrick in the coming weeks. If the relationship lasts then the picture of the duo after the 2021 win will not be the last one we see. So, there you have it, Patrick Cantlay is off the market and enjoying his relationship with his girlfriend Nikki.

Jon Rahm was gearing to win the Memorial Tournament in Ohio after a 6 shot lead after the third round. But a positive COVID test meant the player had to withdraw resulting in Patrick Cantlay and Collin Morikawa battling it out for the honor of lifting the trophy.

In the 71st hole Morikawa held a one shot lead but Cantlay birdied to go level on 13 under par. In the ensuing extra hole playoff to decide the winner, Patrick Cantlay got a par and managed to defeat fellow country man Morikawa. It was his fifth overall win and fourth PGA Tour win.

Also Read: Aaron Wise Girlfriend – From Live TV Gaffe to Relationship in 2021, Get the Details!

The trophy was handed to Patrick by 18 time major winner Jack Nicklaus. The golfer was joined on the green by his girlfriend as they celebrated another win for Patrick.