From a young age, Richa Moorjani was attracted to the art of performing, something which was fostered in her by her parents. Richa started learning how to dance at the age of five, and now she is a famous dancer who frequently posts her dancing videos on YouTube and Instagram. But Richa was not limited to just dancing, the art of performing led her to the stage, and it was only natural for the actress to make her way in front of the camera.

Richa Moorjani was born Richa Shukla to her Indian parents, who raised her in Bay Area, California. Her parents were also from a performing arts background, and they instilled in Richa the same beliefs, which allowed the actress to fall in love with performing and set the building blocks for her career, later on in her life.

I was blessed to have been put in Kathak dance classes 25 years ago because, aside from opening up the world of the arts to me at age 5, it also served as an anchor in connecting me to my roots and culture, growing up as a 1st generation South Asian in the 90’s in California. Once a week, I would be surrounded by other young brown girls also navigating their hyphenated identities in the Silicon Valley, while learning a craft that is ancient, pure and completely uninfluenced by the west. I never really thought about it back then, as it started out as an extra curricular activity, but those hours I spent in class, with the sounds of the Tabla and bare feet slapping the floor in a garage without a mirror, smelling of brass from the bells around my feet and the faint scent of the motherland from the salwar kameez I wore (which never lost their scent no matter how many times they were washed) – those days truly became instrumental in forming my bicultural identity and have shaped so much of who I am today. Kathak helped me to fall in love with my culture and also to cultivate many important skills and qualities that are integral to my career as an actress and performing artist today, like: discipline, perseverance, physical and emotional stamina, respect for art in its purest form, hard work, resilience of spirit, the ability to find validation from within rather than seeking it externally, and always being rooted in where I’m from and never forgetting that, no matter where I live or what I do. When I practice Kathak, it feels like home and a place where I can truly dissolve into creativity and my truest self. I lose all sense of time and my thoughts disappear, and I feel connected to a very divine space. I’m grateful to Kathak and to my guru Srimati Anuradha Nag (disciple of Pandit Birju Maharajji) for giving me the confidence, inspiration and platform to explore other avenues of creative expression and for leading me to becoming the actress/artist I am today. (Full video on IGTV) Song: @anoushkashankarofficial — @kathakfestival #whyikathak thanks for creating this beautiful community for all of us around the world! * * #kathak #dance #indianclassicaldance

The actress started with a stage performance in her high school; later, she enrolled in theatre school, and after graduating, she moved to Los Angeles in order to star in movies and TV shows. Most of the roles she got were one-off performances and supporting roles, which were not extensive in their scope. Finally, after almost a decade in the industry, Richa is getting her chance to impress in the new Netflix series.

Never Have I Ever is a coming of age story about a teenage Tamil girl, Devi, played by Maitreyi Ramakrishnan, living in California who finds it hard to reconcile her teenage needs and desires with the expectations of her family and culture. The show is created by Mindy Kaling and Lang Fisher and consists of a primary south-Asian cast along with a lead who was selected from a pool of over 15,000 aspirants.

Richa Moorjani plays Kamala in the series; she is the cousin of Devi from India who is trying to complete her Ph.D. from Caltech. The three generations of women from South-Asia are represented by the three ladies in the family. Kamal is someone who grew up in India and moved to the US, whereas Devi represents the new generation of TikTok influenced teenage south-Asian girls, and Poorna Jagannathan’s character of Nalini is a cultural mother who is trying to raise her daughter right. 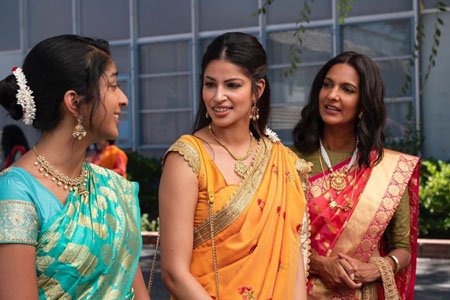 There is a lot of buzz surrounding the series, most of it is because of Midy Kaling’s involvement, but it is also being lauded for finally showing a teenage female lead character from the Indian subcontinent in the small screen. The cast is being praised by critics for their performance, and the consensus among critics is the show is a good watch.

Never Have I Ever is streaming worldwide on Netflix starting from 27 April 2020, starring Maitreyi Ramakrishnan as Devi, Poorna Jagannathan as Nalini, Richa Moorjani as Kamala, Sendhil Ramamurthy as Mohan, Ramona Young as Eleanor, Lee Rodriguez as Fabiola, Darren Barnet as Paxton Hall-Yoshida, and Jaren Lewison as Ben Gross.

Richa Moorjani Graduated from U.C. Davis – She Moved to LA to Pursue Her Career in Acting Richa Moorjani was raised in the Bay Area, where she also attended high school. She was balancing extra-curricular activities and education at the same time. Richa was focused on her training as a dancer, and later she found a lot of appreciation for performing on stage. She took part in her school’s theatre program, which allowed her to be selected for a performance at the Edinburgh Fringe Festival.

After graduation from high school, the actress moved Davis California to attend U.C. Davis, where she minored in the Theatre and Dance program. Few years after her enrollment, the actress graduated with a BA degree and packed her bags again, this time to further her career in the city of dreams.

Richa wanted to be an actress from a young age; after college, she had the tools to audition for different roles. She got her first big break in the show The Mindy Project, playing Geeta in the critically acclaimed show. It probably was not a hard thing for Mindy Kaling to hire the actress for her new show Never Have I Ever. Recently, the actress appeared in an episode of the hit Fox series 9-1-1. 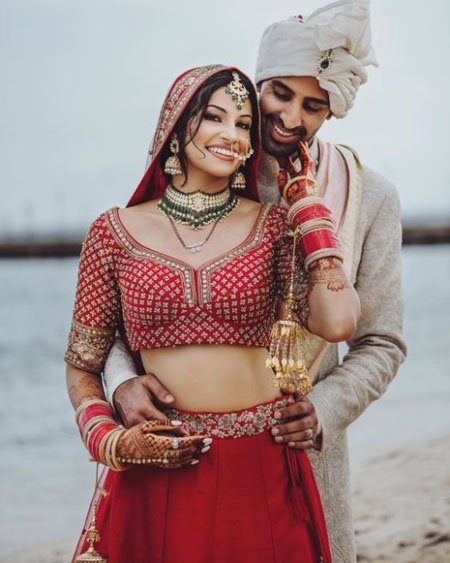 Richa Moorjani is married to her husband Rishi Moorjani, the couple got married on 20 October 2019.
Source: Richa Moorjani Instagram

Richa Moorjani was in a relationship with her boyfriend for a few years. They got married in 2019 in the presence of their friends and family. The couple organized a destination wedding in Cancun, Mexico, where a traditional Indian function was held with Richa Moorjani and her new husband Rishi Moorjani wearing traditional dress.

Rishi and Richa Moorjani became husband and wife on 20 October 2019, and there are many pictures of the couple enjoying their matrimonial on her Instagram page. In Indian tradition, the bride takes the last name of the bridegroom after their wedding, which is why Richa Shukla became Richa Moorjani. The newly married couple is currently quarantining together after only recently coming back from their vacation in Thailand.

Jessica Alexander Plays Olivia Hayes in Get Even...

Mia McKenna-Bruce Plays Bree Deringer in Get Even...