Alexxis Lemire started her acting career in 2016 when she got the role of Scarlett Double in the Disney XD series Lab Rats: Elite Force. She was 20 years old when she got her first break, and since then, her filmography has grown slightly. Alexxis is yet to make her silver screen debut, but the actress has been part of three other TV movies, and now she is one of three stars in critically lauded Netflix movie, The Half of It, streaming in May.

The actress was born on 30 May 1996 to her parents, father Jim Lemire and her mother Hilda Lemire. She was born and raised alongside her United States Marine brother Joel Rodriguez in Londonberry, New Hampshire. She continued her education, and while in high school, she fell in love with the art of acting. After finishing her high school, the actress actively pursued a career in show business, which landed her a part in the Disney channel show, and now it seems the 23-year-old is on her way to do stardom.

While her acting career was limited to the small screen, the actress, build up her Instagram and other social media presence. Alexxis graduated from Londonberry High School in 2014, and she seriously stepped up her social media presence. The exposure also resulted in the actress getting some more roles and probably had a hand in the actress getting in the upcoming highly anticipated Netflix movie.

The Half of It is the new movie from Netflix about a love triangle between three teenagers who fall in love with the same person. Directed, written, and produced by the second time director Alice Wu, The Half of It was one of the highly anticipated Netflix movies of the year and it seems the film is winning over the critics with an amazing cast and an equally good story which is hitting all the right notes.

Alexxis Lemire plays Aster Flores in the new Netflix movie. She is a high school student, and someone Paul Munsky, played by Daniel Diemer, has a crush on. Aster is beautiful, and Paul lacks the word to talk to her and make an impression, which is why he enlists the help of a classmate to write love letters to Aster, pretending to be Paul. 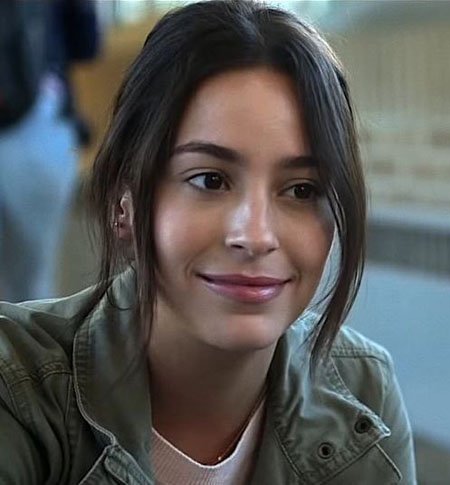 The Half of It is about a straight-A teenager, Ellie Chu, played by Leah Lewis, who does not have any friends and is in a tough spot when she decides to write school papers for other students in return for monetary compensation. Ellie is the one Paul turns to when he needs someone to help him make an impression with Aster. But the problem arises when Ellie also falls for Aster, and in turn, a love triangle takes shape, complicating friendships.

Netflix is releasing The Half of It on 1 May 2020, starring Leah Lewis as Ellie Chu, Daniel Diemer as Paul Munsky, Alexxis Lemire as Aster Flores, Catherine Curtin as Collen Munsky, Collin Chou as Edwin Chu, Enrique Murciano as Deacon Flores, Wolfgang Novogratz as Trig Carson and Becky Ann Baker as Mrs. Geselschap. As mentioned above, Alexxis Lemire started her career with the Disney XD series Lab Rats: Elite Force, where he appeared in episodes 11 and 12 of the first season. The actress got some recognition from the role, and she continued her acting career with the TV movie The Other Mother, where she played Taylor.

In 2017 she appeared in two TV movies, the first one was The Other Mother and the second and more popular one was Truth or Dare. She played Jessie Havnell and appeared in the film alongside her good friend Luke Baines who played her partner Carter Boyle. In 2018 she appeared in another TV movie, The Art of Murder, and in 2019 she was hired to appear in the Netflix film The Half of It.

As it is almost customary with almost all the Netflix production, when there is a premiere for one movie or show, most of the stars are invited to take part. As the Outer Banks cast, Alexxis Lemire was also present during the premiere of Stranger Things season 3. Next, the actress will be seen in the upcoming movie Cerebrum.

Alexxis Lemire was in a Relationship with Jake Short Alexxis Lemire and Jake Short met during the filming of Lab Rats: Elite Force. He was the regular cast member of the show, and when Alexxis came on as a guest in two episodes, the two hit it off and dated for a while. It does not seem they are currently in a relationship as there is no mention of Jake Short in Alexxis’ Instagram page.

Her Instagram account does not feature anyone with whom she is in a relationship with. Luke Baines appears in a couple of pictures, but it seems the two are pretty close friends, and Luke appears to be coupled up with someone else. The word from the rumor mill is, Alexxis Lemire is currently single and focused on her exciting career.