It was a long, hard, and frustrating road for Allen Lazard and his short NFL career, but he persevered, worked hard and, as Aaron Rodgers said, didn’t let the bitterness seep in. Now, he is the talk of the town in Wisconsin and all over sports media. If you ask the undrafted rookie, “Was it all worth it?” now, he will most definitely say "yes."

NFL Career; Going Undrafted to Catching a Touchdown in the 4th Quarter of Monday Night Football Allen Lazard in his combine and 40-yard dash.
Source: Acme

Coming out of college, the 6 feet 5 inches tall 227 lb, who ran a 4.55s 40-yard dash, was going to get picked by a team. But then came the Senior Bowl where NFL scouts saw him drop numbers of balls, there were already concerns when it comes to the athlete about drops, and then the Senior Bowl performance signed his fate.

The wide receiver went undrafted and was taken by Jacksonville Jaguars as an undrafted rookie on 30 April 2018. During the cut day, Allen did not make the 53-man roster and he was waived on 1 September 2018. The player was signed to the practice squad the following day, and then on 18 December 2018, Green Bay Packers came calling. The player came into a team where the Quarterback was hurt, the coach was fired, and the team was sub .500. In the Week 17 game of the 2018 season against the Lions, Allen recorded his first and only reception for 7 yards, in hindsight, just like Mason Crosby's worst game of the year last season was a set up to his first Lambeau Leap this year, Allen's 7 yard, inconsequential catch, was also a sign of things to come.

2019 was a new season, and it brought hope for the player, hope of making the team on a full-time basis, and to prove his worth. Allen posted some great pre-season numbers, and he was the standout performer for the team before the season began. Allen Lazard was picked up by Packers from the Jaguars' practice squad.
Source: Instagram

But on 31 August 2019, the player was again waived for the second time in his career and was unable to make the 53-man roster. He was signed to the practice squad the next day, and Aaron Rodgers explained how scared he was someone might scoop up the player on waivers, but no one came calling, and by 4 September 2019, Allen was given an active roster spot.

During the Week Six game against the Detroit Lions, the Packers' wide receiving corps was depleted. MVS was involved in a scary-looking injury but came back, Geronimo Allison was out and so was the number one receiver Devante Adams. So, Aaron put in a good word for number 13 Allen Lazard and during a pressure situation, 3rd and 5th in the fourth quarter with the Packers trailing by nine and only nine minutes left on the clock, Allen was thrown into the game (and boy did he pay back the faith put on him).

Watch: The video of Allen Lazard catching his first touchdown pass against the Lions

Aaron took the snap and then lofted a beautiful pass down the sideline where Allen was keeping the DB busy, and on a 35-yard strike, Aaron found the tall receiver who reached out his long hands and secured the ball and Packers were able to score with the receiver getting his first NFL touchdown.

After the game, Aaron talked about the confidence Allen possessed, which led the signal-caller to be confident in the 23-year-old kid to get the job done. Rodgers loved the confidence and believed in the former Iowa player to spark some light into the comeback win, and Packers improved their record to 5-1.

Watch: Allen's interview with the press after the first TD catch

Everyone was singing his praises, from the coach, Quarterback to the people in the media. Allen Lazard, if he keeps fighting and developing his game, then, it seems, a star is born in Green Bay.

Allen Lazard will probably never be rid of his dropping tendencies, the same thing which resulted in him going undrafted. But no matter how many balls he drops or Aaron makes it impossible for him to catch the ball, during a high-pressure situation, he always comes clutch.

After a game which was turning bad for Allen, the game came down to a third down in the fourth quarter with five minute on the clock and Green Bay trailing the Lions 13-20. On the right side of the formation, Allen carried the DB outside and then stemmed his route to the middle of the field. Aaron threw the ball high and Allen came down with it again, as he did in week 6 against the same opponent.

But this was a bye-saving catch he made, and as it appears, Allen's got the Detroit Lions' number. Green Bay may not have their legit number two receiver, but if Allen could clean up those drops, it seems the spot is his to lose and what a story it would be for the undrafted player, undrafted to becoming a legit number two option for Packers.

The perfect example of hard work and confidence paying off, Allen Lazard, was instilled with the work ethic from an early age. He was born on 11 December 1995 to his parents, father Kevin Lazard and mother Mary Lazard, and it was his father who got him to fall in love with football. He is the former player of the Iowa State Cyclones, and Lazard went to the school his father went to.

Before deciding on the college, Allen played football, both sides of the ball, in Urbandale, where he still holds most of the records. In his four year career with the school, he posted school records, 105 receptions, and 2,349 receiving yards, 34 touchdowns, and 14 Interceptions. 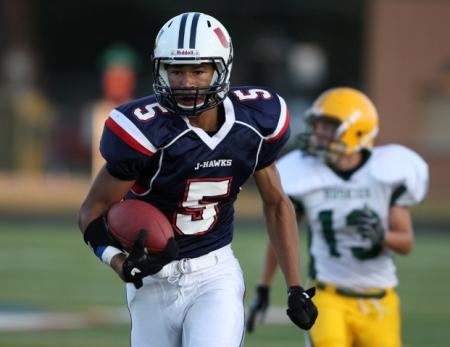 Allen Lazard set the school record in both the offensive and defensive side of the ball.
Source: Patch

Coming out of high school, he was a USA Today All American, Offensive Player of the Year in 2013, according to Des Moines Register and also Defensive Player of the Year for 2012, which went along with his three-time All-State selection. When the dust settled, he was a conscious four-star recruit coming out of high school and colleges were lining up with offers for the wide receiver.

Allen received offers from Stanford, Notre Dame, California, Nebraska, and Iowa; instead, he decided to stick with his father and brother’s team in Iowa State Cyclones. Going to Iowa State was good for his career, but the decision was also responsible for the player finding his girlfriend and falling in love.

Who is Allen Lazards Girlfriend? How is Their Relationship? Allen decided to play football for Iowa state, which was also the decision made by a lady but to play soccer. She was Kourtney Camy, and the two athletes fell in love while in college. Kourtney grew up in Denver, and she went to JK Mullen High School, where she played the position of defender. While in high school, she got her team to five Colorado State Championships and won all of them. The team also came in the third position at nationals while they managed to corral the Texan Cup Championship in.

Kourtney was born on 1 November 1993 to her parents Trenton Russell and Dagny Camy. She was proficient in soccer, which led her to Iowa State in 2013 and started playing for the college team. All in all, she played in 70 games for the team and recorded one goal while playing defender. This was also the time she was able to meet the football star for Iowa State, Allen Lazard. The two struck up a friendship and soon were going out, and to this day, they are together. After he was picked up by Green Bay Packers in 2018 from the Jaguars’ training squad, she moved with him to Wisconsin.

Camy and Lazard share a strong bond, and they both try to raise each other up, which is what relationship is all about. The couple is enjoying their time together, but they are not married or engaged. Allen started his college career in 2014 with Iowa Cyclones. He posted close to 600 yards in his first season with the team. 2015 was a dominating year for the player, playing 11 games with 56 receptions and 808 receiving yards with six touchdowns.

Receiving yards wise, he posted his best year in 2016 when he crossed the thousand-yard mark for the first time. Allen started in 12 games with 69 receptions and 1,018 yards with seven touchdowns.

In 2017, Allen caught 71 of the balls targeted for him with 941 yards and ten touchdowns. By the time his four years in college football was done, he set the Iowa State record books 241 receptions, 3,360 receiving yards, most touchdowns in a year with ten, consecutive games with a reception 48, four consecutive 100-yard receiving games and 12 total 100-yard receiving games. All the records were on the name of Allen, which meant most of the Draft experts were saying he will get picked by a team in the NFL, but fate played a different hand and we Green Bay Fans are all happy for it!