We know Lost and Hawaii Five-0 star Jorge Garcia is extremely private about his relationships. But not speaking about it doesn’t mean he won’t share his happiness with the world. This may even come as shocking to some, because as much as they follow him on the screen, they rarely realize how happy he’d been for a long while to have found the love of his life.

The 46-year-old is finally shipped to his long-time girlfriend, now turned wife, Rebecca Birdsall. Many don’t even have the slightest clue about it. The two are one of the most adorable couples around. They share a dog, travel the world together whenever they get the chance and both are crazy fanatics of Halloween. They even had a whirlwind tour of Greece for their Honeymoon!

Just got back from our honeymoon: a whirlwind tour of #Greece

Both of them don’t have such a huge following on their Instagram pages. Despite the fame, Jorge’s is followed by just below 200k people and Rebecca’s by just over 500 people (like any normal person). So to many, their relationship had just been a tight drum, but Rebecca did mention him a lot in her posts.

Jorge Garcia Married His Wife, Rebecca Birdsall, in a Beautiful June Wedding in Ireland; Jorge Wore a Gorilla Costume with the Suit! Jorge pretty much stands out alongside his wife, Rebecca, to his right.
Source: Rebecca Birdsall,Instagram

On June 22, 2019, Jorge Garcia and Rebecca Birdsall said their vows at Leixlip Manor outside Dublin, Ireland. Jorge’s close friend, Sharon Zimmer (also an actress), accompanied him as well as Rebecca to the alter. Rebecca’s big sister officiated the wedding, her sister-in-law designed the dress, and Ashley Platz was her maid of honor. It was a dream come true for the both of them after they were engaged sometime in 2018.

The wedding just came with a bang and left fans dumbfounded. Jorge was not the type to share too much of his romantic life or professional life on social media, but always had photos to put up. Most of his them were either glimpse of his past, a few details of his private & non-romantic life or just clips of his dog. But Rebecca did pop in between sometimes, and the outside world, besides his companions, had no idea who the woman was and assumed he was just living a single life. And he’d never mentioned or referenced her. 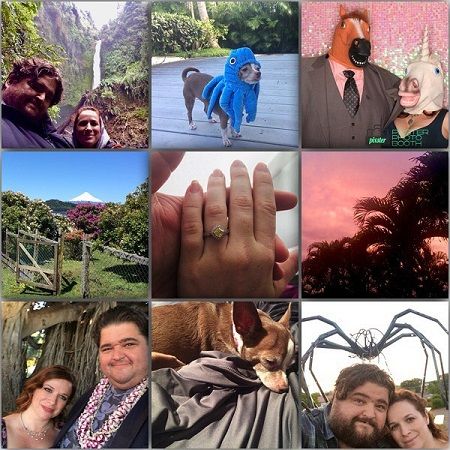 Rebecca centered ‘getting engaged’ as the highlight of the year 2018.
Source: Rebecca Birdsall, Instagram

The Hurley actor is known for his humble and fun nature in real life, and he absolutely cracked it at his wedding. Before saying their ‘I do’s, he put on a Gorilla costume under the suit and removed the gloves, mask and Gorilla paws to be his smashing self. The funnier thing is, some of his mates joined in on the fun. The best day!!! Thank you @edithousedublin for capturing it for us!

Watch the video as a trailer into the wedding. It’s beautiful.
Source: Rebecca Birdsall, Instagram

The woman of his life turned out to be more active of the two in showing her love on social media, and it seems they have quite a history. Jorge is part Chilean (from his father) and part Cuban (from his mother). Meanwhile, Hawaii is where Rebecca calls her home. You can imagine where they could’ve met.

Hawaii Was Where It All Started for the Couple, The Full Dating Story

Both of his critically acclaimed series, Lost and Hawaii Five-0, was shot in the Hawaiian islands, and it comes to no surprise they would eventually meet. Since only the latter of the two shows had diverse shooting locations, they could’ve met when Jorge was there for Hawaii Five-0. It also lines up with the time (around 2013) the allegations of his relationship with Lost co-star Bethany James Leigh Shady came to an end.

By March 2014, Jorge was already attending group dinners with his future wife. She’s been kind enough to remind us of that. And by 2015, they were already living together, wearing matching socks and all that. 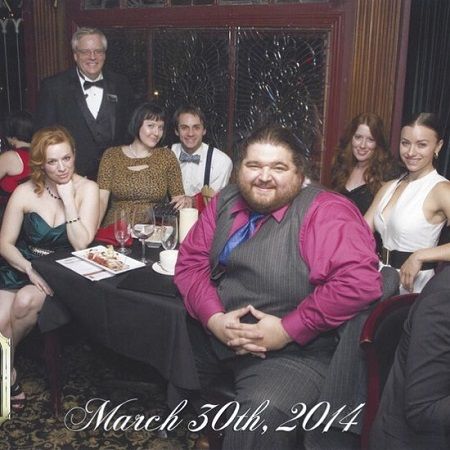 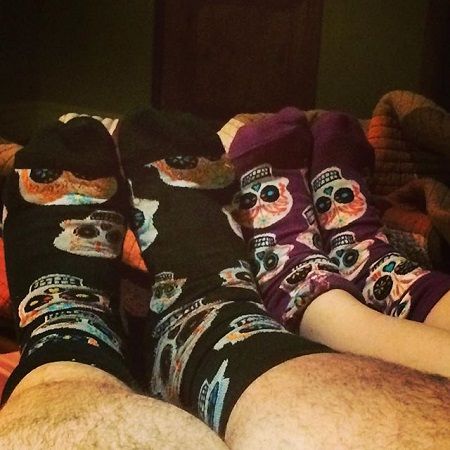 And the remainder of the time went on just enjoying their life together while the big guy continued starring in Hawaii Five-0 as the conspiracy theorist Jerry Ortega. It should be about 6 years that they were together before getting hitched for a wedding. But judging by the bond they have, it probably was a lot longer than that, and the past relationships could have been false preaching.

Don’t be deceived by Rebecca’s low social media followers when you learn she is an actress too. The celebrity wife has built up quite a résumé with supporting roles since 2009. Most projects she was a part of were short films and low-budget movies, until 2017. She dressed up as Marilyn Monroe on Halloween as well.
Source: Rebecca Birdsall, Instagram

Rebecca got a single-episode appearance in Maggie as Marilyn Monroe in 2017. The TV series, of course, had Jorge as one of the main supporting actors, and they worked on the same episode. Then, they again worked together on one Hawaii Five-0 episode, He Puko’a Kani ‘Aima, in 2018. She portrayed the role of Susan Barnes. Try and spot her, if you are a fan.

Jorge Garcia has come a long way from his Lost days. He made his career from the series and over the years he has been racking up quite the resume for himself. Next, the actor will be seen playing the Memo in the Netflix movie Nobody Knows I’m Here.

Memo is a reclusive man living in a Chilean village. Hiding away from the world, the man is also keeping inside him an angelic voice which was the reason for him hide from the world. But when a stranger comes to stay, he battles with the idea of revealing who he is and the gift he is hiding.

Netflix only recently released the trailer for the movie and according to the trailer, the movie will be released on 24 June 2020.

Husband and Wife Are Both Crazy Halloween and Scary Movie Fanatics

Married life is absolutely a bliss for the happy couple. They went to the ancient country of Greece for their Honeymoon. What makes the conjugal lovelier is that they have so many things in common. Their joint love for Halloween and all things scary is unmatched by anything else. 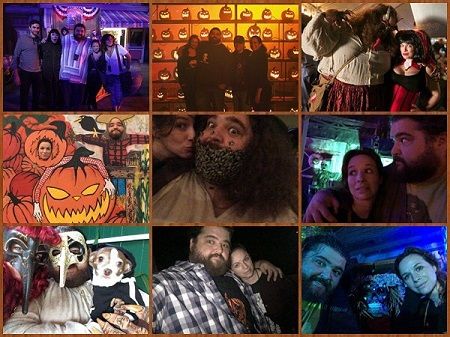 Yes, it is a weird thing about ‘Jorge’. He loves scary stuff, and Rebecca is his partner in crime. Whenever they get the chance, they attend the scare-themed events and regularly have fun with each other in their home.

Every meal ends in a beard check. #DontCallMeSmudge

Meanwhile, Rebecca also had a pet in the past. In contrary to Jorge’s dog, she had a cat named Buddy that she lost in 2014. Since being with Jorge though, she’s absolutely loving her time with the dogs. The oldest photo of Smidge is from October 2015.

The two also used to work on Jorge’s blog. He created it during his days in Lost, named Dispatches from the Island and often used to post on it. He had a thing called the 30 Day Drawing Challenge that he did in 2014, and his wife followed it in 2016.

With the new step the couple is taking in their relationship, there obviously remains a question of little Jorges and Rebeccas. They have not revealed if there will be children any time soon. But they take very good care of the dogs and Rebecca loves her nieces, which might indicate there will be some kids featuring on their social media pages someday.

Tune in to Celebs In-Depth for more Biography and Celebrity Life contents of your favorite stars.