Kyle Trask went from a nationally unknown player to propelling himself as one of the top quarterbacks in college football within a single season. But during the COVID halted season where Kyle was cooking he kept up his form by throwing the ball around with his girlfriend. So, who is this girlfriend helping a future first round pick?

While presenting a woman as someone else's "property" by calling them their girlfriend and not by their name is wrong. But that is how people search for information on the internet and the information needs to be presented in similar manner.

The Florida Gators Quarterback has been on top of his game this year and one of the people helping him is his girlfriend. Since a nice story broke about the couple during the COVID lock down there has been some interest in knowing who the College Senior was dating. Here is everything you need to know. 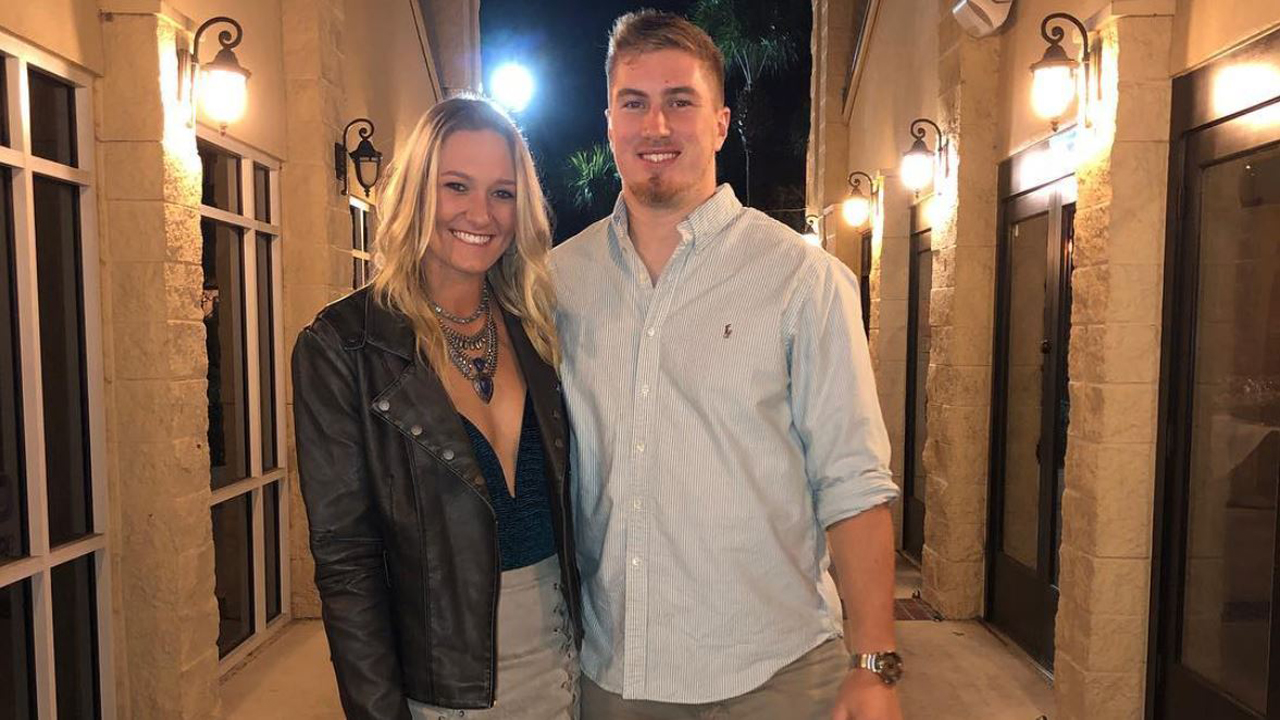 Kyle Trask and his girlfriend Jade Caraway have been dating for over two years now.
Image Source: Kyle Trask Instagram

A college Quarterback who is balling on the field generates a lot of interest off the field also. From their mannerisms to their person lives, everything is analyzed to foretell if the player is ready to make the jump to the NFL. While Kyle may not be ready just yet, he is however winning in life as he himself would tell you.

Great performances on the field and a strong personal life off of it is the recipe to success. That is why the rise of Kyle Trask has been so swift and strong. From a backup to 400 yards in a single game throwing Quarterback, the upswing can be credited to his hard work and also the amazing girlfriend who is by his side always.

Kyle Trask's girlfriend is University of Florida's Women's Softball Center fielder Jade Caraway. She is 22 years old and is about a month older than Kyle. Jade joined the Gators in 2018 and later went on win various honors and setting records with the most triples for the team in the three year period.

Jade Caraway was born on 11 February 1998 to her parents in Florida. She was raised in Winter Garden, Florida and decided to stay in the state for the University education. Choosing UF was not a hard decision for her and as it turns out she was also meant to find love during her play time and studies.

Kyle Trask started dating his girlfriend, Jade Caraway, from September of 2018. The couple celebrated their first anniversary on 13 September 2019 and as of this day they have been together for a little over two years now.

No one saw the whole lock down process coming when the first cases of COVID-19 were reported. It was just supposed to be a flu which would go away but here we are almost a year later and still some of us are locked in our homes.

Sports was canceled, that meant Kyle Trask needed to abandon his scorch earth level of performance for health purposes. The type of form he was in there were the questions if he would be able to stay in shape while being away from the practice facilities.

Well, in order to not let the laziness of staying at home set in, the Kyle decided to throw the ball around with his girlfriend. An athlete on her own right, playing center field means ability to track the ball and a strong arm. It all came handy for Jade in helping her boyfriend throw the pigskin around.

Recommended: Is Trevor Lawrence Married? Girlfriend and Relationship Detail of the QB 2020

While the story of Kyle and Jade keeping each other in shape was cute there was a commentator who had to manspalin the whole situation resulting in an awkward moment live on air during the Gators' game.

The commentator did not see the cuteness in the story, instead he went on to say that she would not be able to catch the velocity of balls Kyle is used to throwing. We will not tell you the difference between a softball game and college football but Jade is still an athlete who can hold he own.

But Kyle Trask and his girlfriend Jade Caraway are not letting anything deter them. Being in love means lifting each other up and when we hear story like this, that is what we see, two people who are in love and are there for each other no matter what.