One of the regular judges on Food Network's reality-based cooking television game show Chopped, Alex Guarnaschelli, is well renowned as the recipient of the Iron Chef award on The Next Iron Chef: Redemption. This popular television personality currently serves as the executive chef of Butter restaurant in Midtown Manhattan.

Alex launched her culinary career in France, trained at the La Varenne Cooking School in Burgundy, and worked under the mentorship of several French restauranteurs before coming to New York. She released her debut recipe book Old-School Comfort Food: The Way I Learned to Cook in 2013.

Guarnaschelli's largely successful professional career is apparent for everyone to see, but what about her personal life? Is this talented personality dating someone? Without further ado, let's find out. 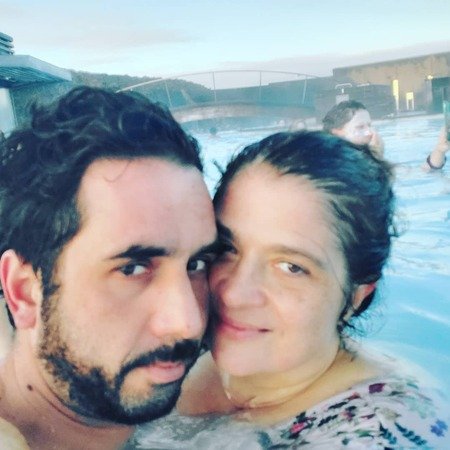 Alex Guarnaschelli is in a relationship with her brand new boyfriend Michael Castellon. Just as Alex, her partner is a chef as well. In fact, he is popularly known as Chef Mike.

Castellon is a former Chopped champion and featured on Iron Chef America: The Series as Sous Chef to Alex Guarnaschelli.

Back in New Year's eve, Michael took to his personal Instagram to share an adorable picture of the duo. He captioned the post, "#2019 was an #amazing #year #love #ending it with the #mylove #2020 #[email protected]"

Alex's boyfriend followed the post with another upload of the pair, captioning the picture, "#love that is all.." On Valentine's Day, Michael took to Instagram once again to celebrate the occasion with her partner. He wrote, "#happy #valentines to #my #love @guarnaschelli" It's unclear how long the couple's been dating, but they go as far back as summer 2019. Mike's appearance on Alex's Instagram might be non-existent, but Chef Mike did feature on one of the videos Guarnaschelli posted on Facebook, where she called him her 'boyfriend.' She captioned the clip, "My boyfriend @chefmike808 talks us through a project he’s working on ?" The love story of Alex Guarnaschelli and Brandon Clark is one perfect for fairytales that unfortunately ended with tragedy. The way they met, fell in love with each other, got married, and sadly separated is nothing short of a film script.

No matter how strong a connection is, you can never promise it will last a lifetime, and for these kindred spirits, it proved to be the case. Anything that begins must ultimately end. Alex Guarnaschelli tied the knot with her fiance turned husband Brandon Clark on 29th April 2007. Eight years into their married life, the couple decided to separate.

The couple had first met at New York's Institute of Culinary Education in 2006. We've previously covered their romantic life in detail. Learn the entirety of their amazing love story here.

Me and Ava stealing a moment on the beat Bobby Flay set pic.twitter.com/fBVfBEwzyz

Alex was already pregnant when she began her married life with Brandon Clark. In September 2007, merely months following their wedding, the couple welcomed their daughter, Ava Clark.

Just like her famous mother, Ava carries a fondness for cooking. Speaking to Food52 in June 2019, the chef said:

Ava is very territorial and independent about cooking. She acts like a chef. She also has such a natural instinct that I don’t want to get in her way.

Irrespective of the career her daughter pursues, Guarnaschelli insists she will provide all the support Ava needs. Alex added, "I don’t care if she becomes an accountant, firefighter, vacuum cleaner salesperson, deep-sea diver, writer or chef. I’m totally excited to watch her life unfold."