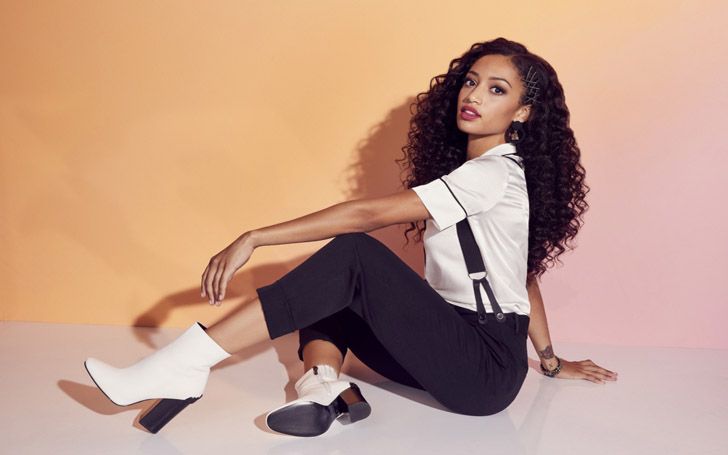 The CW show All American worked because of an amazing cast coupled with a great story and one of the actresses who make the show tick is Samantha Logan. Samantha plays the character of Olivia Baker in the show and she is all set to return for a second season when the show comes back this month.

Samantha was born in Boston to her parents on 27 October 1996 where she lived for a while, and now the Irish/Trinidadian mixed-race actress is living in Los Angeles where she is working and plying her trade in movies and TV shows. She was only 10 years old when she asked her mother to leave Boston and start living in Manhattan because she wanted to pursue her career in acting. The actress was taking lessons and learning the intricacies of acting when she landed her first job in the show Gossip Girl. She was only 13 when the small part in the show was made available for her, and since then the actress only built on her career with one character at a time. Her biggest role came in 2018 when she was cast in the show All American.

'Olivia Baker' is the Biggest Role of Samantha's Career Samantha Logan was hired to play the role of 'Olivia Baker' in the show 'All American.'
Source: IMDb

In the height of her career, Samantha was cast in the show All American, a show about football and also race relation of how the two sides of the community live, and what advantages and disadvantages are levied on them. The leading character Spencer James is from the Crenshaw neighborhood, and the coach of Beverley Hills team Billy Baker takes in Spencer so he can play for the team.

Olivia is the daughter of Billy, and they all live together in the house in the rich part of Los Angeles. Olivia is a good kid but someone who got into drugs and ruined her life and friendship with her best friend Layla, played by Greta Onieogou. The character is going through a lot when she starts to develop feelings for Spencer, but he and her best friend get into a relationship, which complicates things further for her.

Olivia is a great character and brought brilliantly to life by Samantha in the show, and she will come back in the second season to further explore her character and give her best in the biggest role of her career.

Samantha's Relationship With Her Boyfriend Dylan Sprayberry. Are They Broken Up? Dylan Sprayberry and Samantha Logan were involved in a relationship.
Source: Instagram

But the thing is, since then the two appear to be on radio silence when it comes to sharing their images together on Instagram. They are not deleting the pictures on their respective pages, but neither are the two sharing any more new images. It's been almost eight months, and the two appear to be broken up with the actress unfollowing Dylan while he still follows her on Instagram.

The six years of relationship seemingly came to an end this year, which is a bummer considering how great the two were together, but not all relationships are meant to go the distance.

Other Roles In Movie & TV Shows Portrayed by Samantha The first major role of Samantha Logan was in the show '666 Park Avenue.'
Source: IMDb

Gossip Girl was her first appearance in a TV show, but then, she made an appearance in Detachment as well as Law & Order: SVU in 2011. Her first major role came in the show 666 Park Avenue where she appeared in 13 episodes of the mystery/drama show.

After the show was canceled, the actress appeared in the daytime soap General Hospital where she played Taylor DuBois for 14 episodes, followed by an appearance in Melissa & Joey. She found love in Teen Wolf and then made her main role debut in the movie Alexander and the Terrible, Horrible, No Good, Very Bad Day and then she was off to appear in The Fosters for seven episodes. Samantha Logan played a role in the second season of '13 Reasons Why.'
Source: IMDb

Junior was another show where she made an appearance in all 10 episodes and also took the role of Nina Jones in the second season of 13 Reasons Why. Then along came the starring role in the show All American, and the actress is now all set to appear in the movie The Empty Man which will be released in 2020.