Ares Netflix is a Dutch horror drama and the first original series from the Netherlands to debut on Netflix. Created by Pieter Kuijpers, Iris Otten, and Sander van Meurs, the show follows a biracial medical student from Amsterdam named Rosa Steenwijk (Jade Olieberg). She gets herself involved with a secretive student society called Ares and gradually begins to uncover what they really are.

Meanwhile, Tobias Kersloot plays the role of Jacob Wessels in the Netflix series. The other notable cast includes Lisa Smit as Carmen Zwanenburg and Robin Boissevain as Roderick van Hall. The trailer for the Dutch horror show dropped on 13th December 2019. Ares premiered on Netflix on 17th January 2020. With eight episodes in total, the show’s been receiving positive reviews so far.

Is Tobias Kersloot Dating Someone? Tobias Kersloot is currently in a relationship with his girlfriend Abbey Hoes.
Source: Bios Agenda

Tobias Kersloot is dating his girlfriend, Abbey Hoes, since 2016. The couple’s known each other for well over a decade. However, it was a professional relationship that got them closer on a personal level. The lovebirds played boyfriend & girlfriend in the movie Hotel de grote L, and there, the duo fell utterly in love!

During an interview with We are Labels, the pair revealed everything about the origin of their love, and all the beautiful memories they have had so far together.

Starting off, the couple was asked the most romantic thing they did for each other. Abbey reveals,

Toby once asked me to marry me. But the fact that it was a joke did not make it any less romantic.

When I turned 20, Abbey was in LA, so she couldn't be on my birthday. She then gave me 7 packs with 7 cards for my birthday, one to open every day so that I thought about her every day and had contact even though she was very far away.

Speaking of the memories they’ll never forget, Hoes recalls - “Strolling through Gera together and singing out loud.” Whereas, Kersloot responds, “I keep that to myself.” 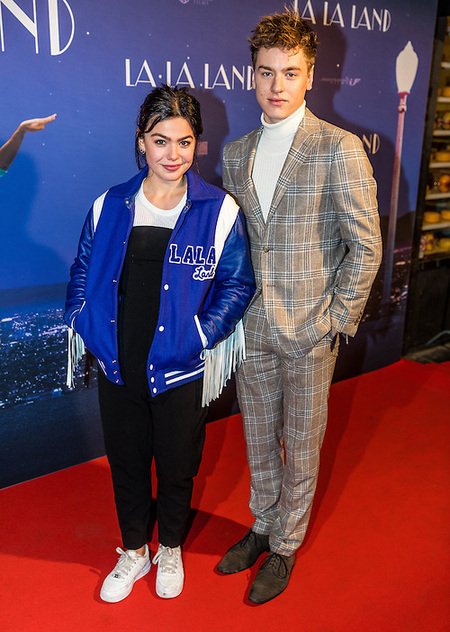 Abbey then reveals her ideal free evening. “Drinking wine together and playing Yathzee, preferably in an idyllic landscape on a blanket.” In contrast, the Ares star says - “Nice to listen to pictures and watch movies on the projector, preferably with red wine.”

Speaking on the definition of love, Abbey states - “Being able to love someone unconditionally and dare to lose yourself in it.” Likewise, Tobias claims to love is trusting your partner and daring to be fully open to the other.

Tobias Kersloot and his girlfriend Abbey Hoes couldn’t be more adorable together. This young, talented couple radiates so much love, it gives fans warm jitters! Tobias Kersloot made his acting debut with the role of Tom in a TV series Hidden Stories (2012). The same year, he starred as James in a short film Water (2012). Tobias then portrayed the character of Nieuw bandlid Rick in a TV film 20 Lies, 4 Parents and a Little Egg (2013).

From 2010-2013, the Dutch actor played the role of Jesse in a TV series Vrijland, appearing in 167 episodes. This was followed by the role of Halt jongen for a single episode in De Leeuwenkuil (2013). He then featured in a couple of short movies, Gameboy (2014) as Tobias and Jag är Polisen (2014) as Kieran Toussaint. The same year, he starred in the movie Dansen op de vulkaan (2014) as Ramon.

The actor had five acting credits in 2015, starting off with a TV film Sunny Side Up, where he played the role of Mick’s Friend. This was followed by a single episode appearance as Rolf Kempenaer in Moordvrouw (2015). In the big screens, he starred in De Reünie (2015) as Bart (Jong), Hallo Bungalow (2015) as Toto Prins, and A Noble Intention (2015) as Theo.

In 2015-16, the Jacob Wessels actor portrayed the character of Nikolai/Nicolai in a mini-series, Tessa. This was followed by the portrayal of David Karsten in Flikken Rotterdam (2016). He then featured as Len for a single episode in Centraal Medisch Centrum (2016). The same year, he made a big-screen appearance as Emile in Kappen! (2016).

In the year 2017, the actor featured for five episodes as Mark de Vries in Brussel (2017) and for eight episodes in Klem (2017), playing the role of Jim. The same year, Tobias portrayed the character of Felix in The Fantastic Family Hotel (2017), and Jelle in a short film Sonate (2017). Kersloot ended the year with the role of Thomas for a single episode in Van God los (2017).

In 2018, the Dutch actor featured for ten episodes in Nieuwe buren as Luc Dijkma, followed by a TV movie Tom Adelaar, where he played the role of Luuk. He subsequently made small-screen appearances in a couple of miniseries, Amsterdam Undercover (2018) as Peeters and Gappies (2018) as Sjonnie. The following year, Kersloot played the role of Ramon for a single episode in Oogappels (2019).