Aidan Wojtak-Hissong’s face may not be particularly familiar to most people, but the actor’s voice is something you’ve probably heard before if you have kids and need to watch the PBS Kids channel. Aidan voices the character of Leo Chockers in the series, and now he is going in the opposite direction by appearing in the supernatural/comedy/drama series I Am Not Okay with This.

The actor who plays Liam in the show was born to his parents and is the first of three kids. He is currently living in Ontario, Canada, but his work also means the actor switches between the United States and Canada. According to Aidan Wojtak-Hissong’s Instagram page, the actor knows how to play the violin; he is also a singer, and dancing is also something he dabbles in. Aidan Wojtak-Hissong, as mentioned above, is one of three kids of his parents, and his brother, Finlay Wojtak-Hissong, is also an actor who appears in Kindness of Strangers. The youngest of the Wojtak-Hissong kids is Coleby, and to the best of our knowledge, Coleby is not into acting yet.

In 2014 the actor was hired to appear in the show The Stanley Dynamic, and since then, Aidan Wojtak-Hissong’s career took off. The actor was about five years old when he first started in the show business and slowly, one production after the other; he started to make a name for himself in the world of show business.

But the biggest role of Aidan’s career came in the form of Jacob in the show Playdate. The actor played the role of Jacob for over 40 episodes, and this not only allowed a steady paycheck for the young actor, but the show also helped get his name out there for other producers to take notice.

Well, notice they did, and soon another show came calling where Aidan played Frank. Falling Water was the show’s name, and Aidan Wojtak-Hissong appeared in nine episodes followed by a short stint in the PBS kids show Let’s Go Luna! where he voiced the character of Leo. But by far, the biggest role of his career will come in the highly anticipated Netflix show I Am Not Okay with This.

I Am Not Okay with This is a supernatural/comedy/drama series based on the graphic novel of the same name. This Netflix production comes from the people involved with the production of The End of the F***ing World and Stranger Things, and according to the early reviews, the show is a mix between Carrie and John Hughes's classics.

Aidan Wojtak-Hissong plays the character of Liam in the series, and he is the son of Maggie, played by Kathleen Rose Perkins. He is also the small brother of Sydney, played by Sophia Lillis, who is dealing with her high school problems and also the complications that come with growing up, oh, and there are some powers involved, so there is that. Losing her friend Dina, played by Sofia Bryant, to her jock boyfriend, Brad, played by Richard Ellis, isn't going to help things either.

Liam and Sydney are the kids of Maggie, and they love their father when the show starts, which means the home life is not great for the two kids. Aidan is going to appear in all eight episodes of the show, and he, along with his mother, will be affected by the revelations of his sister. All the episodes of I Am Not Okay with This will be available on 26 February, only on Netflix. 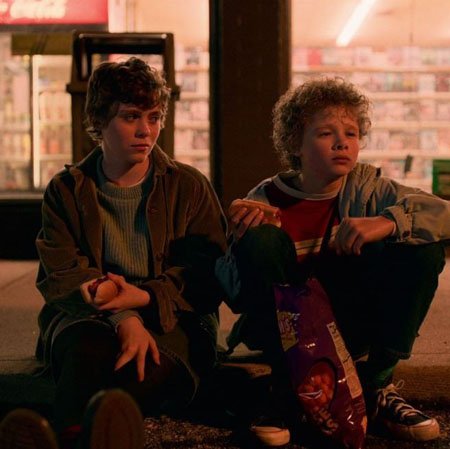 Aidan is not super active on the social media site, and considering he is still in school and a little small when age is concerned, not being active on social media sites is a huge plus. He does have an account on Instagram, but the whole thing is monitored and partially run by Aidan’s mother.

The description on the profile simply says his mother co-manages the account, and most of the posts on his account are dominated by his latest show I Am Not Okay with This. Currently, the account boasts close to 2,000 followers, but we suspect it will rise once the show is out, and people get to see the actor in action.