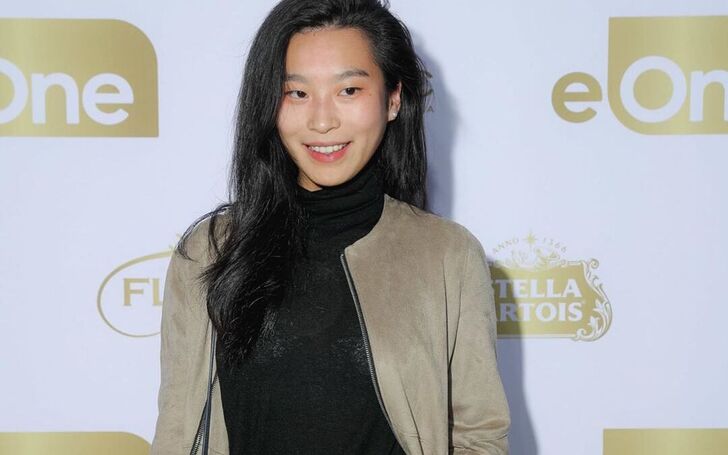 Amanda Zhou is a rising star, making her name through the Netflix series Spinning Out (2020). The actress (also known as Zhou Duo Duo) was born in Toronto, Ontario. She’s got a sibling sister.

Amanda Zhou is playing the role of Jenn Yu in the Netflix series Spinning Out (2020). She is a skilled figure skater and Kat's best friend. Compared to the rest of the cast, Amanda performed most of her skating, including the ice work by herself. In fact, she only used a stunt double for the jumps.

The story follows the character of Kat Baker, an ice skater who suffers a horrendous injury, played by Kaya Scodelario. She subsequently gets eliminated from the competition and carries mental trauma from the incident.

Baker is offered the opportunity to kickstart her career as a pair skater with a talented bad-boy partner named Justin Davis (Evan Roderick), who belongs to a wealthy family, all whilst she hides the history of mental illness of her family. Zhou’s portrayal of Jenn Yu in Spinning Out is receiving love from both fans and critics. The viewers couldn't be in more awe of her skating scenes. Moreover, the way she adds humor to a pretty serious drama is certainly commendable. Amanda Zhou's net worth is estimated to be $150,000.
Source: Zhou Instagram

Amanda Zhou began her acting career playing the role of Tiffany in the Chinese romance drama I, My Brother (2011). Four years later, she featured as Geisha in the TV movie Warrior (2015). This was followed by her roles in the short films; If I Go (2016) and Residue (2017).

In 2018, the actress starred as Fang in a couple of episodes of a Canadian crime drama, Blood and Water. A year later, she played the role of Paige in a Canadian horror film Rabid (2019), followed by a brief cameo as Waitress in a supernatural horror film It Chapter Two (2019).

Zhou is set to play the role of Daisy in the science fiction drama October Faction that premieres on Netflix on 23rd January 2020. Amanda Zhou is currently not in a relationship.
Source: Zhou Instagram

Amanda Zhou appears to be single. Although she could be dating a boyfriend in secret, her public profile suggests she is not in a relationship right now. Moreover, her social media provides no indication of her dating endeavors.

Zhou seems completely engrossed in her growing career at the moment. It might be a while before she welcomes a romantic partner. In the meantime, the Spinning Out actress is pretty close to her family. As a matter of fact, she often shares pictures of her dear ones on Instagram. On 25th March 2019, the actress wished a happy birthday to her mother with an adorable picture and a sweet caption. She wrote:

In Chinese culture, it’s not good for the young to sing happy birthday to the older between a certain age range because it’s as though you are wishing them to their grave. So I will celebrate this whole week, well everyday but I will highlight this week for an amazing mother who is very young at heart. On 20th March, she came into life and has gone through an immense experience at both ends of the spectrum and now built a path for my sister and I. I am forever grateful. I love you mama. #momsarethebest #myprincess #strongwomen

Amanda quite clearly carries a strong bond with her parents and family, especially her grandmother named Xuan Zhou, who was an actress in Shanghai during the jazz era. She appears to be quite proud of her granny since she’s included this fact in her Instagram bio.

Meanwhile, it remains to be seen when this gorgeous actress welcomes a better half into her life. Fans might have to wait a while before she gets in a relationship and embraces a new boyfriend.