Twenty-four-year-old Grzegorz Damiecki took his first steps in the world of show business in 1991. Following in the footsteps of his parents and grandparents, the actor studied, trained, and later created a career for himself, which has lasted for nearly three decades now. It was all stage performance at first but his first appearance in a movie in 1992, the actor juggled two different careers, one on stage and one in front of the camera.

Grzegorz Damiecki was born on 15 November 1967 to his director-mother Barbara Borys-Damiecka and actor father Damian Damiecki in Warsaw, Poland. Coming from a long line of actors and show business insiders, Grzegorz had big shoes to fill. The actor started his journey by first finishing high school and then enrolling in the State Theatre School in Warsaw. He graduated in 1991 and started working as a stage actor for Ateneum Theatre.

The Polish actor appeared in numerous plays in the Ateneum Theatre, which gave him the big-break to propel him towards future success. Grzegorz was hired to appear in his first movie, called Squadron, in 1992. Almost thirty years later, the actor appears in the adaptation of the Harlan Coben book The Woods, coming to Netflix.

Harlan Coben is a best-selling author who is known for his mystery novels, and recently he signed a multiple book deal with Netflix. The Woods is one of the books of Harlan Coben, and it is followers The Stranger, which was also a Netflix production based on Coben’s novel. This time though the show will be in Polish and the cast, as well as the production team, is from Poland.

The Woods follows Pawel Kopinski, who is a prosecutor working in Warsaw. He is a simple man, but he carries a heavy burden, the mystery of what happened to his sister almost two decades ago. Working on the case of his lifetime, clues about his sister’s disappearance starts to emerge, and the mystery starts unraveling his life. Looking for closure, Pawel unearths mystery about his own family’s past, which calls into question everything he has held true. In the books, the main character is named Paul Copeland, and the setting of the plot is in the United States. The show, on the other hand, is based in Poland, and the name of the character is also changed likewise. According to the plot synopsis released by Netflix, the story of The Woods will follow two timelines, one set in 1994 and the other in 2019. The show is also set to have only six episodes.

Making an Impression on Both Stage and Screen After finishing his education and training, Grzegorz Damiecki started his stage career with the play Company in 1991. He worked in the Ateneum Theatre and played over a dozen different characters during his time there. The actor is still actively involved in appearing in plays, and unlike most actors who abandon theatre after making it in front of the camera, Grzegorz Damiecki is still giving his 100 percent in the art form, which made his famous.

The actor appeared in Shakespearian plays and works of other famous writers. In 2007 he was awarded for his portrayal of the character Feliks Warszawski in the play Family Album. Theatre is something Grzegorz holds close to his heart, and you can find recent updates about his time on stage on his Facebook page.

Grzegorz Damiecki started his acting career, in front of the camera, a year after making his debut on stage. He was cast as a SS officer in the critically acclaimed movie Schindler’s List. The actor is also famous for his voice acting; he started voicing Bruce Banner for the Polish dubbed version of Marvel movies, Avengers (2012) onwards. He has also voiced different characters in for Polish dubbed versions of other Disney movies.

Throughout his career, Grzegorz has appeared in more than 30 different projects. Romantic drama, thriller, action, he has been part of almost all genres of movies and TV shows. Recently the actor appeared in the HBO drama series The Border. The 52-year-old actor is one of the most recognizable faces and voices in the Polish movie and TV industry. 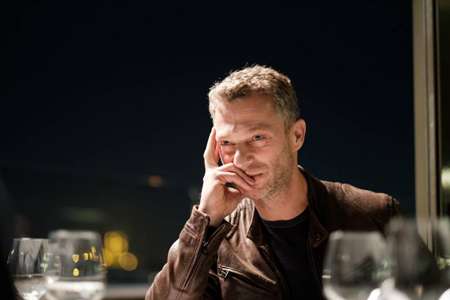 According to reports, Grzegorz Damiecki is married to Dominika Loskowska. The couple is also parent to their three kids Antoni, Aleksandra, and Janina. Grzegorz Damiecki is tight-lipped when it comes to talking about his family; the actor keeps his personal life secret. He is also not a big social media user except for a Facebook page and a private Instagram; we were unable to find verified accounts of the actor.