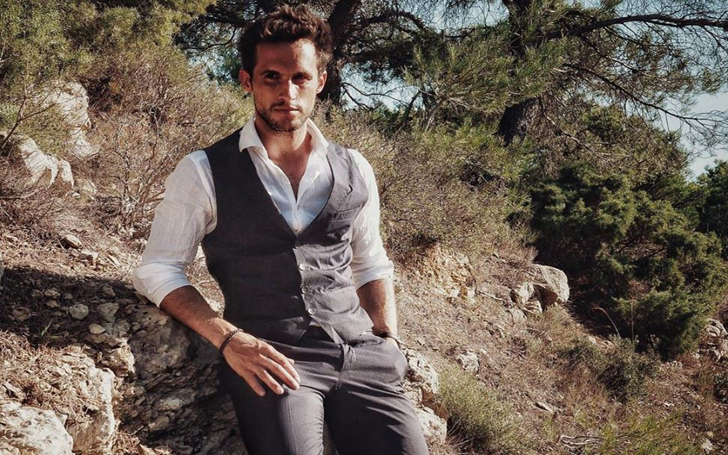 The way Rob Heaps holds himself up and carries himself in TV shows and movies, one thing you will probably never realize is the fact Rob is British. Most of the time, he is playing an American character, and there isn’t even a single hint of a British accent in the way he talks. But maybe it is just the sign of how good an actor Rob Heaps really is and his talent is on full display on the USA Network series Dare Me, playing Matt French.

Rob Heaps was born on 11 July 1983 in England to his parents, and for a little time, he stayed in York, where he also got his education and his desire to become an actor. After being done with his education, the actor went to St. Petersburg and studied drama; Rob later said it was hard studying at the place because the learning process was physical. Rob Heaps is an actor from England who plays Matt French in the USA Network series Dare Me.
Source: Rob Heaps Instagram

But it seems all the hard work, dedication, pain, and struggle of the learning days worked for Rob Heaps. His career as an actor is a testament to the fact everything worked out for him, and now Rob is enjoying praises for his portrayal of Matt French on the thriller series Dare Me on USA Network.

Dare Me is based on the book of the same name, written by Megan Abbott, and the storyline involves the competitive world of cheerleading where girls are ready to do whatever it takes to get ahead and make it out of the small town they’ve known their whole lives. Lives are ruined, and there is even murder as we try to figure out what and how it all happened.

Rob Heaps plays the character of Matt French in the USA Network series Dare Me, and he is the husband of the high school cheerleading coach Colette French, played by Willa Fitzgerald. Matt is looking for a fresh start after his previous work and looking for a new place to land; the whole family arrives in Sutton Grove, where his life will be changed forever.

Matt and Colette grow close to Addy Hanlon, played by Herizen Guardiola, and Colette strips Addy's friend Beth Cassidy, played by Marlo Kelly, of her captaincy; things only begin from there. Dare Me is currently in its first season, and seeing the reception from fans and critics alike, the series will most certainly return for a second season.

Rob Heaps was acting from the time he was with his education, and the first work as an actor in front of the camera came in the UK series Law & Order: UK. This was the first on-screen job for Rob and so began his career in 2011, followed by a TV movie appearance and then in a single episode of daytime soap Doctors.

The first long stint job of Rob Heaps career came in 2016 when the actor appeared as AC Tom Halliwell in the series Home Fires. But the show which put Rob on the entertainment industry map was Imposters, released in 2017. The Bravo TV series was an attempt at something new from the reality-heavy channel, and the dark comedy series was a hit among fans with Rob’s character Ezra Bloom being the standout performer. The series lasted for 20 episodes and two seasons, and it was canceled without an order for a third season.

Though the series ended, Rob made friends of all the cast members, and they frequently appear on the actor’s Instagram feed. Imposters not only resulted in Rob making new friends, but the series also helped further his career, which brought him to this point.

Before Rob Heaps was on TV, He was Entertaining the Theatre Audiences After being done with his training, Rob Heaps stayed working in theatre for a while, and it was the place where he honed his skills, which came in handy later in his career. The actor we see now is the product of the stage.

Rob performed in various plays, including King Lear, Pride & Prejudice, and While The Sun Shines. The actor is a versatile actor and coming from a theatre background; it is no wonder he is able to come across as commanding and in control. Not every actor comes from theatre, but it is always a plus when someone’s proven their talent on the stage.

Matt French is Married to Colette French in Dare Me; But does Rob Heaps Have a Wife? Matt French is married to his wife Colette in Dare Me, but there is no Rob Heaps wife.
Source: Rob Heaps Instagram

Rob Heaps is a handsome man, with his English mannerism and slender build combined with the chiseled jawline and the flowing hair. The ladies love Rob, and we are not surprised one bit, but it is not just his face, which is beautiful, so is his heart. A man who takes time off his work to help others is someone who carries with them a massive heart.

There is just not a single reason to like or even fall in love with the actor, but the thing is, Rob Heaps does not have a wife. He is not married, and we cannot find a single trace of a girlfriend also. Rob is close to almost all his co-stars, but all of them are his friends. Rob Heaps is currently single and enjoying his life with his friends.