Marlo Kelly is not a well-known actress and considering her small filmography we are not surprised. The Aussie actress only started acting in front of the camera in 2015 when she was 19 years old and since then she’s been part of three different shows, appearing in more than 50 different episodes.

The actress from Sydney was born in 1996 and Marlo Kelly grew up in the inner west part of Sydney with her parents. Australia was her home all her life with her career only taking her out of the country, recently. But no matter how far she is from her home, Australia is on her mind all the time, and what is happening with the wildfires down under. 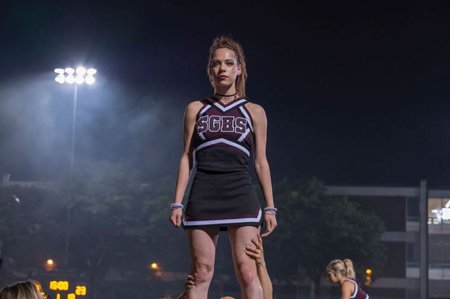 Marlo Kelly lived in Australia almost all her life and she also started her acting career in the country. The major breakthrough for the actress was through a daytime soap opera, this allowed Marlo to be recognized and led her to what will become a career-making role as Beth Cassidy in the USA Network series Dare Me.

Cheerleading is not a sport, which has numerous movies and TV shows dedicated to the life of the ladies involved and the only way we’ve seen them over the years is as eye candy for other male athletes. There have been cheerleading movies before but Dare Me is not your typical drama/comedic look at the lives of people involved.

Dare Me is about the cutthroat, competitive world of cheerleading where the girls are willing to do whatever it takes to get themselves ahead and the show is about a group of small-town girls trying to get out of the place and the only way they know how is through scholarships from cheerleading. Beth Cassidy is in a bind with the arrival of the new coach, Colette French.
Source: Marlo Kelly Instagram

Marlo Kelly plays the character of Beth Cassidy in the USA Network series. She is the captain of the cheerleading team but the arrival of Coach Colette French, played by Willa Fitzgerald, along with her husband Matt French, played by Rob Heaps. The new coach also results in Beth and her best friend Addy Hanlon, played by Herizen Guardiola, separating.

Dare Me is currently in its first season with the opening scene of the first episode setting up a deadly encounter for the people involved in the high school cheerleading program. The series premiered on 29 December 2019 with the first season consisting of ten episodes.

Marlo Kelly Started Her Career on Daytime Soap Home and Away Though the actress never said she wanted to be an actress, the fact she started in the acting business at the age of 19 probably gives you a hint as to what she wanted to do after high school. The actress soon signed with an American agency to represent her and her career as an actress was up and running after she was hired for her first role in the series Home and Away.

Home and Away is an Australian daytime soap, which started in 1988 and is still ongoing. Marlo Kelly was hired to play the character of Skye Peters and she did so in 43 episodes with her final appearance in the series coming in 2016.

Marlo then went on to star in a short-lived series called Patricia Moore in 2018 where she appeared as the titular character in all 10 episodes of the first season. All her experiences and exposure resulted in the actress getting hired to play Beth Cassidy in the novel adaptation of Dare Me.

Beth Cassidy Actress Marlo Kelly’s Relationship Status – Does the Actress Have a Boyfriend? Marlo Kelly is busy with her career and is currently single.
Source: Marlo Kelly Instagram

The filmography of Marlo Kelly should tell you the actress is still finding her footing in the world of show business. There is so much for her to explore and the heights she needs to reach before it is all said and done which is why you will be hard-pressed to find a boyfriend, fiancé or husband of Marlo Kelly.

Marlo seems to be dedicated to her craft, which is fine considering the excellent job she is doing in her most recent stop. At just the age of 23 there is still time to find the right person to fall in love with, and maybe, eventually, share vows but as of now, Marlo Kelly is a happily single lady, committed to her work and dedicated to doing her job to the best of her capability.