Cameron Gellman was a creative kid from his childhood; by the time he reached high school, the young actor was ready to show his talents. He was the lead in the award-winning play put on by his high school, where he was recognized for her performance. An active kid from the beginning, the young actor, knew he wanted to be in the show business. Cameron started his professional acting career at the age of 17, and now he is playing a superhero.

The actor was born on 10 November 1998, to his parents, mother Kim Gellman and father Jeff Gellman, in Clayton, Missouri. He was raised alongside his older brother Justin Gellman in Clayton, where the two brothers grew up playing basketball. Cameron adores his older brother, and from a young age, he looked up to him and tried to follow on the path Justin laid out. Both his father and mother are proud of their two sons, Cameron is a successful actor and Justin is studying to become a doctor.

Cameron wanted to be an athlete like his brother, and he was an avid lover of basketball, but in grade five, he suffered from an arm injury which curtailed his playing time. This resulted in Cameron being interest in playing the guitar and finding his love for the art of acting. Before his freshman year, the young actor went to LA for acting and film study, and Cameron knew it was something he wanted to do for the rest of his life.

Stargirl is the work of Geoff Johns who also thought of the character and wrote the comic in 1999. When Warner Bros. and DC Universe asked Geoff to look at some property for adaptation, Stargirl was the one he pitched the studio. The idea he pitched was well-liked by the executives, and they gave the green light to include the show as part of the DC Universe on-demand service with a one day delayed showing on The CW network.

After an extensive hiring process, different actors and actresses were brought together in different batches to fill various roles. In February 2019, the involvement of Cameron Gellman was announced in an unspecified role. It was later revealed the talented young actor was playing Rick Tyler / Hourman in the series. He takes up the power of his father and becomes the new Hourman, joining the new Justice Society of America in the process. Courtney Whitmore is a high school sophomore, living in California, but when her mother marries Pat Dugan, she moves to Nebraska with her mother. In Blue Valley, she discovers Pat is a former superhero sidekick, she finds the staff of Starman, and after it chooses her, she becomes Stargirl. And when there is a hero, there are going to be villains, Stargirl needs to stop the rise of Injustice Society, which is why she enlists the help of her new school friends and forms the new Justice Society of America. In 2011 Cameron Gellman was still in Wydown Middle School when he was diagnosed with type 1 diabetes. He was 13 years old at the time, and less than a year later, he was diagnosed with celiac disease. Celiac disease is an immune disease, which makes a person gluten intolerant because it damages their intestines. But despite the two difficult diagnoses, Cameron never let his spirit down; he had a great family and a loving brother to take care of him.

After a few days of being diagnoses with type 1 diabetes, Cameron told his mother he wanted to be involved with the Juvenile Diabetes Research Foundation. The foundation is working on finding a cure for the condition and also helps kids with the disease. Cameron is a National Youth Ambassador with the foundation, and he is also a mentor who wants to help educate people about the condition. He has also helped raise over $10,000 in donations for the foundation.

Before Cameron was famous, he was a basketball player, and after getting his arm injured, the actor turned to music and acting, which was his calling all along. The actor was a freshman when he started to attend acting schools, and all through high school, he was training in Warner Laughlin Studios and John Rosenfeld Studios. Winning awards for being the best freshman actor and soon Hollywood came calling as the actor started his professional career at the age of 17.

The first on-camera role for Cameron Gellman was in the daytime soap Days of Our Lives in 2016, along with an appearance in the TV series The Thundermans. The same year Cameron made his film debut, playing Mark in the acclaimed movie 20th Century Women. He also appeared in the Tribeca Film Festival debuted series Relationship Status where he played Liam in three episodes.

Cameron also appeared in the pilot episode of Let the Right One In, which is an adaptation of the 2008 Swedish movie, and the 2004 novel of the same name. In 2018 the actor appeared in guest roles for The Fosters and The Middle while also starring in the Heathers, which was adapted from the cult classic movie of the same name from the 80s.

In Heathers, Cameron played Kurt in seven of the 10-episode long series where a group of outcast students plans to murder the cool kids of their high school. The show was on the newly formed Paramount Network and did not last more than the 10-episode first season. Recently the actor appeared in the hit ABC series The Good Doctor. 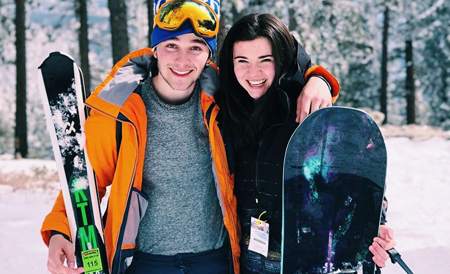 Cameron Gellman and Brett Cooper met during the filming of Heathers and are good friends.
Source: Brett Cooper Instagram

Cameron Gellman is active on Instagram; the actor does not have a lot of followers on the image-sharing site (he has over 3,500 followers). The actor posts from time to time on his page, with pictures of his dog, upcoming shows, and friends, dominating the grid. There is also a picture of him as a young boy, with his older brother on his Instagram page.

The thing we were not able to find there was a presence of a special someone. There were no pictures of Cameron Gellman with a romantic partner or a girlfriend on his Instagram. He seems to be close with his Heathers co-star Brett Cooper, but she insists they are only good friends and nothing more. All signs do point to Cameron being single at the moment and focused on his acting career as well as volunteering for JDRF.