Emily Reid is an up and coming actress who is appearing in the ITV/Epix period drama Belgravia. Before appearing in the series, Emily only had three credits to her name when it comes to movies and TV shows. She is, however, a theatre trained actress, someone who put time into her craft and is getting the chance to appear in a Julian Fellowes TV series.

The actress was born on 4 September 1997 in London, and Emily formed an interest in acting from a young age. Since she is a rising star, there is not much information about the actress readily available, which is why we are unaware of where she went to school and who her parents are. Emily Reid is an actress who plays Sophia Trenchard in the ITV/Epix series Belgravia.
Source: IMDb

Emily Reid started training for a career in acting at the age of 18, after finishing high school, the actress enrolled in acting training programs. All the hard work and training seem to have paid off for the actress, as she plays a pivotal character in the new ITV/Epix series Belgravia.

During the time of quarantine, with productions on all on-going shows canceled and the remaining episodes already aired, there is very little to get our mind off the things happening in the world with the pandemic. Staying home can be hard, and Julian Fellowes is trying to relax those and boredom and anxiety with another aristocratic historical drama series based on his own work.

Belgravia is about the secrets between two families, which started all the way in 1815, two days before the Battle of Waterloo. The secret affects the remaining family and the world they created for aristocrats in Belgravia, almost 25 years after the end of the Napoleonic war. But the thing about secrets, they always come out, and the two families brace to have their world changed by things that happened 25 years ago. 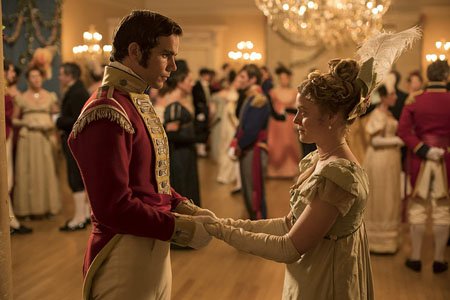 Emily Reid plays Sophia Trenchard in the ITV/Epix series, the daughter of Anne and James Trenchard, played by Tamson Greig and Philip Glenister. Sophia is the root of the secret as she and Lord Edmund Bellasis, played by Jeremy Neumark Jones, are involved in a romantic relationship resulting in the birth of their son, Charles Pope, played by Jack Bardoe.

Edmund dies during the war, and the mother of the child, Sophia, dies during the birth. This results in Sophia’s parents giving up the child to protect their name and image in society. But when the truth becomes too big to hide, there is nothing anyone can do to stop the levees from breaking and the flood to sweep everything away.

Emily Reid starrer Belgravia was released on ITV on 15 March 2020 with the American premiere for the series scheduled to be on 12 April 2020. The series consists of a huge cast, which includes Ella Purnell, playing Lady Maria Grey, Harriet Walter, and Tom Wilkinson playing the Countess and Count of Brockenhurst, with Alice Eve and Richard Goulding also starring.

As mentioned above, Emily Reid was only 18 years old when she enrolled in the London Academy of Music and Dramatic Art (LAMDA) to get the required training for a career in acting. The actress got a Foundation Diploma from the school in 2016, one year after her enrollment, and followed it up with another school to further her training.

Emily started her MA Acting classes at the Royal Central School of Speech and Drama in 2018, two years after leaving LAMDA. She left the school in 2019, and by the time she already started appearing in TV shows and movies. But through her time in the two schools, the actress took to the stage to implement what she learned.

Watch: The trailer for The Trouble with Maggie Cole

After appearing in multiple plays, the actress was hired to appear in the movie Leprechaun Returns. She followed it up with an appearance in the British series Curfew, and then she was hired to appear in Belgravia in 2019. Next, Emily Reid will play Roxanna Dubiki in the TV series The Trouble with Maggie Cole, which is set to premiere in 2020.