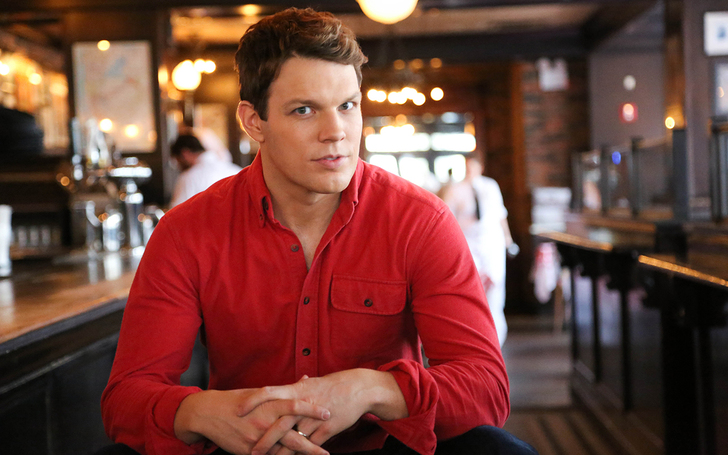 Jake Lacy was born on 14th February 1985 in Vermont. He went to Otter Valley Union High School, followed by the University of North Carolina School of the Arts (UNCSA), where he graduated in 2008.

Following his graduation, Lacy worked a few jobs in the state of New York, notably as a gym receptionist, a bar-back at a club, and a waiter. He simultaneously went to auditions during the day.  The actor continued working the odd jobs until he landed the role of Casey in Better with You (2010-11).

Jake Lacy is starring as Clyde in High Fidelity Hulu (2020)

The American romantic comedy, High Fidelity, is based on Nick Hornby’s 1995 British novel of the same name. Developed by Veronica West and Sarah Kucserka, the series is inspired by the romantic comedy-drama High Fidelity (2000) starring John Cusack, Jack Black, and Lisa Bonet.

As per Deadline, the plot reads: Jake Lacy Career and Net Worth Jake Lacy’s net worth is estimated to be $650,000.
Source: Jake Lacy Instagram (@misterjakelacy)

Jake Lacy is best known for playing the role of Pete Miller on the final (ninth) season of an American mockumentary sitcom The Office (2012-13). In addition, he portrayed the character of Casey Marion Davenport on the ABC romantic sitcom Better with You (2010-11).

Watch: Jake Lacy On His Love For Standup Comedy

In 2014, Lacy starred as Max alongside Jenny Slate in a romantic comedy-drama Obvious Child. A year later, the actor featured as Richard Semico in Todd Haynes’ romantic melodrama film Carol (2015). The following year, he portrayed Olivia Wilde’s character, Eleanor Cooper’s romantic interest, Joe, in a Christmas comedy-drama film Love the Coopers (2016). The same year, he starred as Ken in a romantic comedy movie How to Be Single (2016).

The actor played the role of Nick Beverly on the Showtime crime-drama series I’m Dying Up Here (2017-18). He featured in a total of 16 episodes. Jake Lacy tied the knot with his long-time girlfriend turned wife Lauren Deleo on 22nd August 2015. The wedding was held in Dorset, Vermont. The couple welcomed a daughter in 2018.

Speaking with People in February 2016, Lacy revealed he had been secretly married for months, and life began to feel quite different, getting tied to a spouse.

It feels like you got a person who always has your back, even more so than when you’re boyfriend and girlfriend.

On SiriusXM’s Conversations with Maria Menounos, the actor shed some light on his nuptials. Lacy revealed he had been with his wife for several years prior to the wedding. Jake then joked their fondness for different sports teams was a disputed issue since she’s not from his native city of Boston. Jake Lacy and Lauren Deleo are married since 2015.
Source: Pinterest

I still like to do a little something for her. I’m not like, ‘It’s my babe day. Sorry, you missed out. You should have married somebody born on the 15th.’ I’ll still do something. But she always gets me the greatest stuff and she’s the best. It’s awesome.

During an interview with Entertainment Weekly, the actor revealed he enjoys playing the “roles of good husbands or boyfriend material” since that’s exactly the sort of person he hopes exists in the world.

Jake Lacy appears to be in a blissful relationship with his wife, Lauren Deleo, along with their daughter. The entire family of three couldn’t be more adorable.