Modeling and Acting – Lily Newmark is Conquering Everything in Her Path Lily Newmark poses a striking image with her photogenic lips, almond eyes, and auburn hair. She looks like someone who is meant to be on the covers of magazines and centerpiece of photoshoots. But call Lily Newmark a model turned actress, and you will find yourself in hot waters. She is an actress, through and through, trained hard to be one; modeling just came as a byproduct of the exposure she got after appearing in movies and TV shows.

The actress explains that she is not a slash, someone who identifies as both model and actress. She is an actress; it took her years in drama school to be where she is today, and she will not let the slash terminology define her. This is not to say she does not admire the modeling work, she is a massive fan of fashion, and she did mention the wonderful time she had working for Chanel. But acting is her first love, and looking through her filmography; you will find that she is down for a little experimenting.

Cursed is a new Netflix series based on the Arthurian legend’s characters, but with a graphic novel twist. The show is based on the graphic novel by Frank Miller and Tom Wheeler, and according to early materials released by Netflix, the show is a coming of age drama focused on the heroine of the Arthurian legend and not Arthur who is predominantly featured in texts and on fictional media over the past decades.

The new Netflix series follows the exploits of Nimue, the destined Lady of the Lake, who takes on the mantel of rebellion when King Uther and the Red Paladins crackdown on magic and magical power wielders. In-turn, Arthur is made into a mercenary trying to find Merlin but stumbles across Nimue and her rebellion. During the darkest of times, Nimue becomes the symbol of courage and rebellion while she battles the world’s evils alongside Arthur. Lily Newmark plays Pym in the Netflix series Cursed. She is a normal girl who is displaced by the Red Paladin fighters and becomes friends with Nimue. Pym and Nimue hide and run from the Paladins together, and when the time comes, they join in fighting for their land and their people. In the promotional materials released to this point, Pym is shown as a scared girl displaced from her home, but the actress mentioned that the show is about women’s power, so expect Pym to kick some red cape butts.

Lily Newmark was Awarded for Her Starring Role in Pin Cushion 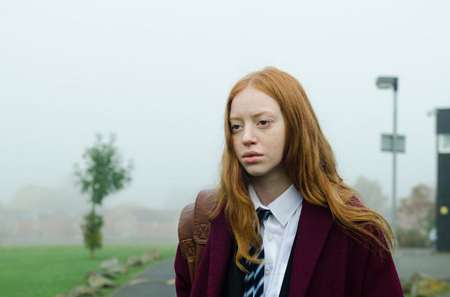 Lily Newmark was awarded and lauded for her performance in her debut movie Pin Cushion.
Source: Lily Newmark Instagram

Lily Newmark started her career as a performer on music videos and short movies. She was involved in stage plays during her school days, but the actress formally started her acting career with a role in the movie Pin Cushion. The film was released in 2017, and it made rounds at the film festival circuit, garnering praise and award consideration for the debuting actress and director.

The high school psychological drama movie was a success in the United Kingdom, with Lily Newmark getting awarded as the best newcomer. Lily said the project was perfect for her and hit close to home because she was also a loner during her high school days, just like her character Iona. Lily said it was an amazing experience working on the movie and allowed her to experiment with different roles over the next three years.

From 2018 she appeared in Juliet, Naked, Solo: A Star Wars Story, Les Miserables, Temple, and Sex Education. She boasts a bizarre list of roles, which shows the range of Lily as an actress and her boldness in choosing projects. When asked about her process behind choosing projects, Lily said she is a “Yes” person; she is not closed to trying out new experiences.

Get to Know Lily Newmark Lily Newmark is a 26 year old actress from London who uses her platform to raise awareness about issues close to her.
Source: Lily Newmark Instagram

Lily Newmark was born on 24 May 1994 in London, the United Kingdom, to her parents, father Brooks Newmark and mother, Lucy Keegan. During high school, she showed an interest in stage plays, and modeling agencies discovered Lily for her distinct look. She started doing modeling work while studying in high school, and then she joined Albany Theatre Company in Deptford, where she trained to become an actress.

After years of working as a model for different brands, Lily made her cinematic debut with Pin Cushion. She was nominated as the Most Promising Newcomer at the British Independent Film Award for her role in her debut film. Over the years, she has expanded her filmography and her social media presence.

Before you leave, make sure to visit Celebs In-depth for detailed analysis about your favorite stars and shows.