Odessa A'zion has not been in the world of show business for long, but still, a few people know the young actress. She first came to mainstream attention in 2017, and now the actress is leading her first Netflix show playing the character of Joey in the Grand Army.

An actress who does not lack confidence and carries her own style, Odessa has steadily grown her social media presence. A style icon and vocal advocate for social justice, the young starlet, does not hold back on any front. So, here are five interesting facts you need to know about the talented actress. There are some complications with the exact age of Odessa A'zion. According to Famous Birthdays, the actress was born on 17 June 1999, which would make her 21 years old. But then there is her Instagram page where she wrote in a post that her age is 19-years-old.

Also, in a recent interview with Nylon, the actress was referred to as being 19 (so we are also sticking with that number). Odessa A'zion was born Odessa Adlon, to her mother, actress Pamela Adlon, and father Felix O. Adlon. Odessa is one of the three kids of her parents. She has two sisters, Gideon and Valentine, and all three are acting.

Odessa changed her name recently, her given name is Odessa Adlon, but professionally she is known as Odessa A'zion. Her parents got divorced in 2010, after nearly 14 years of marriage. Odessa and her two sisters were raised by their mother after their father moved back to Germany.

Grand Army is the new Netflix series based on the play Slut: The Play by Katie Cappiello. The playwriter is also producing the show for Netflix with a diverse cast leading the Netflix show. Though the show is courting some controversy, it seems the release date for Grand Army will remain intact.

The new Netflix show is about five teenagers studying in the largest public school in Brooklyn. Looking at everyone's lives through the five student points of view, Grand Army shows what it is like to grow up in America as the teenagers fall in love, get in trouble, and try to survive in a volatile society.

Also Read: Grand Army Netflix Cast Age – How Old are the “Teenagers” in the New Show?

Odessa A'zion plays Joey Del Marco in the Netflix series Grand Army. Joey is a white student taking a knee during the American national anthem in the show's first trailer. According to Odessa, she is both scared and excited to bring Joey's character for all to see. 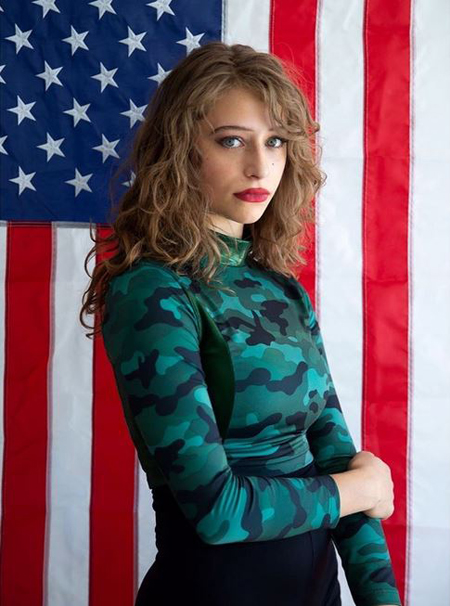 As black students of the other school start taking a knee during a basketball match, Joey also follows their lead. But except for the opening shot and some other short glimpses, the trailer hides everything perfectly. Odessa said about playing Joey, bringing her "vulnerable" side in front of others has her feeling both nervous and excited.

Odessa A'zion is a Vocal Supporter of Social Justice Causes

Odessa A'zion is not afraid to show her allegiance with the Black Lives Matter movement. The actress was seen protesting and criticizing how police officers looked like the military, and they were turning peaceful protests into violent riots.

The actress also wrote a lengthy post where she explained that it might not be her platform to protest, being a white person, she is doing it for the people who cannot be there. Odessa said she was using her "privilege" as a caucasian to raise voice for the oppressed.

There are no shortages of social justice messages on her Instagram page. Though there may be some dissent from some of the people who follow her, Odessa is doing what she thinks is right. Her fans see her dedication, and they support her, whether she is marching for George Floyd or protesting the lack of punishment for the cops who killed Breonna Taylor.

Odessa did not Starts Acting Till the Age of 15

Considering Odessa is the daughter of an actress, it would be easy to assume she grew up performing. Well, not exactly, Odessa wanted to be an actress when she was eight years old, but her mother gave her a choice, act or not fight with her sisters.

It was an easy choice for eight-year-old Odessa to continue fighting with her sisters. Instead, the talented actress only started acting at the age of 15, and she made her debut in the show Better Things, made by her mother. Since, then she has appeared in numerous movies and TV shows, with her biggest role coming in Grand Army as Joey Del Marco.

Odessa A'zion was in a Relationship with Jaden Smith Odessa A'zion was in a relationship with her then-boyfriend Jaden Smith from 2017 to 2019.
Source: Google

Odessa came to the mainstream media's attention after she was spotted with Jaden Smith, son of actor Will Smith. The lovebirds were spotted outside, having a pleasant time with one another, and it was confirmed that they were dating.

Odessa A'zion and her then-boyfriend Jaden Smith started dating in 2017. They were constant fodder for the tabloids, and there are many videos on Youtube of the couple sharing some PDA moments. But the relationship was done after two years. Odessa and Jaden broke up in 2019.

Explore
Blake Abbie’s Father: Meet His Dad Robert Alexander Abbie and Learn in Detail About His Parents!
Explore
Tina Leung From Bling Empire New York: Meet the Influencer on Instagram and Learn About Her Age, Net Worth!
Explore
What Does Bake Squad Do With Leftovers? Details Explored!
Explore
Is Dorothy Still Dating Ari? Are the Bling Empire Couple Together?
Get-To-Know
Bling Empire Cast Andrew Gray’s Abusive Nature: Reddit Users Call Him Manipulative, and Narcissistic!
Celebsin-depth
About UsPrivacy PolicyTerms of UseDMCAContact
Celebs In-Depth is a leading media and entertainment source as a fast-growing information hub. For promotion or advertisement, please mail us at info@celebsindepth.com