Ever since the series Shtisel came on the air in 2013 about an orthodox Jewish family living in the Jerusalem Shira Haas’ character of Ruchama Weiss was a fan favorite, and the series also helped the actress get a lot of recognition in Israeli movie circle. But her new role as Esther Shapiro in the controversial Netflix series Unorthodox will test the waters on her popularity among the Jewish community.

Shira Haas was born on 11 May 1995 in Hod HaSharon, Israel, where most of her early life was spent. Israel was also the place where Shira started her career as an actress and later found fame. The actress did not hold herself to the Israeli film industry, later moving on to star in Hollywood productions.

The actress first found fame in 2014 with the movie Princess which was received well by critics, and especially her acting was praised. This only enabled the actress to put all her attention in her career as a performer, which has now led the actress to star in a Netflix series based on a true story.

Unorthodox is based on the autobiography of the same name by American-German writer Deborah Feldman. The book was released in 2014 and became an instant hit with Deborah’s experience living in an orthodox Jewish family in Brooklyn, and later her leaving of the family for more independence being praised.

Deborah Feldman left her husband and moved to Germany with her son, which is the story in the Netflix series Unorthodox, except for the child part. Esther is based on Deborah’s experience, and the series talks about how Esther finds her freedom from her family and becomes her own woman. Shira Haas plays Esther in the Netflix series, and in the trailer released by the streaming service, we see her character Esther having a hard time adjusting to a family, which she grew up in. She is a different person, someone who is not ready to dedicate all her life to her husband and god; she wants to be free, find who she is, and eventually, live a life which is hers and not based on what the society perceives her life should be. On her quest to be free, she finds friends, Robert and Yael, played by Aaron Altaras and Tamar Amit Joseph respectively, and also lives experiences which never would've been possible.

The struggle of Esther, in Germany, as she looks to find a home in a place, which is not her own, makeup for the four-part limited series. Unorthodox will be released on Netflix, worldwide, on 26 March with Shira Haas starring Amit Rahav playing her husband Yakov Shapiro, and Jeff Wilbush playing Moishe Lefkovitch, someone who wants to return Esther to her family as his way back for his past transgressions.

The Start of Shira Haas’ Career

The first major role of Shira Haas’ career came in 2014 when Princess was released. The movie was positively reviewed by major publications, and her role as Adar also resulted in the actress being nominated for the Israeli Film Academy and winning the best actress at the Jerusalem Film Festival.

Princess brought critical acclaim for the actress, but it was Shtisel and her role as Ruchami Weiss, which brought fans adulation. The series was an instant hit, and she played the character for more than 20 episodes. The show ended in 2016 with Netflix picking up the rights to the show and fans still want more from the series, just visit the comment section the Shira Haas’ Instagram photos, and you will find numerous fans wanting more Shtisel.

Shira appeared in Natalie Portman's directed movie A Tale of Love and Darkness and later appeared alongside Jessica Chastain in the film The Zookeeper’s Wife in 2017. The actress then won her first Israeli Academy Award for best actress in 2018 for her performance in the movie Noble Savage.

The Relationship Status of Shira Haas – Is Daniel Moreshet Her Boyfriend? 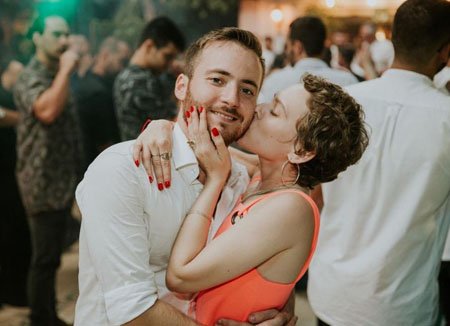 Shira Haas and Daniel Moreshet are in a relationship, according to the fans who have been speculating it for years.
Source: Shira Haas Instagram

When it comes to Shira Haas’ relationship status, the whole thing is a complicated riddle to solve. On 24 December 2017, the actress posted a bunch of pictures on her Instagram feed with Daniel Moreshet, talking about how they have been together for four years. Then, she also explained that the two were friends, and is not a couple.

Daniel Moreshet does look like Shira Haas’ boyfriend, but until she claims him to be her friend, there is no way to confirm the relationship. Whether they are a couple or not, Daniel and Shira do look good together, and fans on Instagram do think the two are dating, so there is that.