Emilie Cocquerel was 21 years old when she got her first crack in front of the camera, doing something she always imagined herself doing when she was older. Over the years, the actress was able to rack up a body of work, which includes one of the highest-grossing Australian movies and now a fantasy Netflix series where she plays a Queen.

The actress from Australia was born on 3 September 1991 to her French father and Australian mother in Sydney, Australia. During the first ten years of her life, Emilie Cocquerel was exposed to different cultures and studied in multi-lingual schools while she lived in France, Los Angeles, and Houston with her family.

Emilie Cocquerel was ten years old when she and her entire family moved back to Australia, where she, her two sisters, and one brother stayed till they were old enough to go follow their dream. Emilie was the eldest daughter, and all the Cocquerel kids followed on her footstep, with her sisters Elsa and Anna, along with her brother Thomas, all trying their hand in the world of show business. 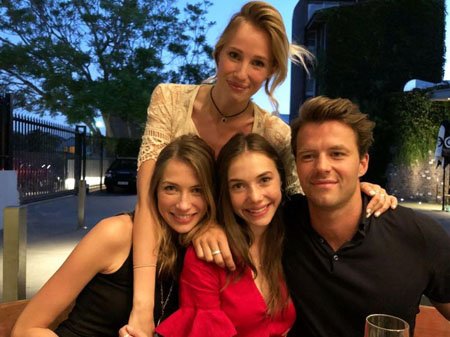 Since the time she was a little kid, Emilie Cocquerel wanted to be an actress, and she was not alone in her family. The actress’s enthusiasm was shared by her siblings; they loved dressing up and pretending to be different people. And as the kids grew, the enthusiasm only went up a notch, and all of the four Cocquerel siblings started their careers in show business.

Elsa Cocquerel appeared in the acclaimed British series Wolf Creek, and Anna Cocquerel made her mark with the long-running Australian soap Home and Away. Thomas Cocquerel, who is the oldest of all the kids and the only son in the family, also started acting at the same time his sister Emilie.

Emilie Cocquerel and her siblings all share a close bond, and as they said to Elle Australia, it has a lot to do with the profession they all share. Being actors, they surround themselves with the same friend circle, and their job has allowed the siblings to grow even closer to one another.

Emilie Cocquerel Studied at WAAPA – Start of Her Career

Before she was appearing in front of the camera and pursuing her career, Emilie Cocquerel was dressing up with her sisters. But to make her dream of appearing in movies and TV shows true, dressing up was not enough, which is why she joined the Western Australian Academy of Performing Arts (WAAPA).

She trained and learned how the skills behind becoming a good actress. She also enrolled in Conservatoire National Supérieur d'Art Dramatique de Paris (CNSAD) to better allow herself to learn all the intricacies of becoming an actress. The actress appeared in movies and TV shows while also sharpening her skills to become the best she can be.

Emilie appeared in a TV movie in 2013 and in the film Joe Cinque’s Consolation in 2016. In the same year, Lion came out, and the movie was one of the highest-grossing Australian films of all time. She played Annika in the movie, which was nominated for an Academy Award. Emilie also played Sandy in the Netflix series The New Legends of Monkey, but another fantasy series from Netflix is why we are here.

The Letter for the King is based on the novel of the same name from Dutch writer Tonke Dragt and deals with the age-old story of knights, horses, war, and the chosen hero we’ve all known from numerous other fantasy series. But there is something hearty about the story within the book, which is the reason why the novel still holds relevance, almost 60 years from its publication date in the Netherlands.

Netflix series, The Letter for the King, follows Tiuri, played by Amir Wilson, who stumbles onto the path of a dying knight. With his final breath, the knight tells him to deliver a letter to the king, or the world will be thrown into chaos. The journey of Tiuri and the friends he gathers along the way, along with the sinister Prince Viridian, played by Gijs Blom, hot on their heels, make up for the story of the series. Emilie Cocquerel plays Queen Alianor in the series, and from the press release, very little is known about the character. We will need to wait till the premiere of the series to find out whose side the Queen in leaning and how she is involved in the quest of Tiuri and the other novices.

Is Emilie Cocquerel in a Relationship? Does She Have a Boyfriend?

Emilie Cocquerel is active on social media, she uses Instagram frequently, and her feed has close to 500 photos. But when it comes to posting on social media sites, the actress only shares pictures of her childhood (rarely) and ones with her sisters (frequently). There does not appear to be a sign of a boyfriend or a significant other on her Instagram feed.

The actress is probably not so keen on sharing her love life with the world, or she could be single. And if we are going solely by her social media presence, then Emilie Cocquerel appears to be single at the moment.