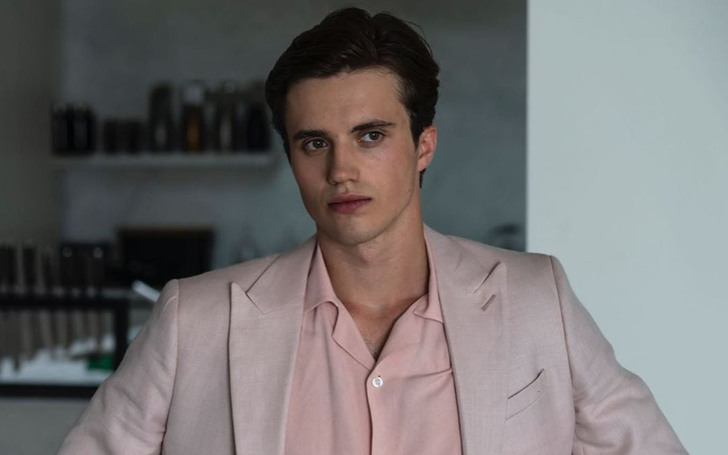 Growing up in a house with a famous celebrity, George Sear wanted to follow in his mother’s footsteps and become a performer from a young age. He wanted to be an actor and started training before he was in high school, appearing in plays and showing interest in on-camera performance. He was only 11 years old when he appeared in the play Waiting for Godot, and building from one performance to another, the young actor was on his way to a successful career in show business.

George Sear was born on 14 November 1997, to his parents, father Simon Sear and mother, Juliet Sear. George was raised alongside his two sisters in Leigh-on-Sea, Essex. Not just an acting lover, George also carried affection for music and trained himself to play guitar as well as drums. The multi-talented actor even competed at a break dancing championship and came in second.

The young actor grew up watching his mother on TV, which left a big impression on all three Sear’s kids. His love for acting led George to his first on-screen acting role in 2009. The English actor was 12 years old at the time, and with the show, he kick-started his professional acting career. Over a decade later, George has established himself as one of the solid performers currently working on the small screen.

Love, Victor is the spinoff/sequel to the hit Fox movie Love, Simon, which was released in 2018. The film was lauded for being the first gay teen romance movie from a major Hollywood studio. After the commercial and critical success of the movie, there were calls for a sequel which resulted in Disney Plus commissioning a spinoff series based on the same world as the movie. The series was later moved to Hulu, which is scheduled to release the series in summer.

Victor Salazar is the new kid at Creekwood High School. He reluctantly moved to the new place along with his family and is having a tough time reconciling with his inner feelings. Victor is gay, and he does not know how best to approach the topic, which is why he seeks Simon's help. Simon came out in spectacular fashion in Creekwood High School, and Victor also deals with his own coming out story, this time, a little different. George Sear plays Benji in the Hulu series. He works in a coffee shop where Victor goes looking for a job. Benji starts showing him how to make a cup of coffee, and the impromptu closeness causes Victor to run away from the shop, totally attracted, and equally flustered. Benji and Victor become friends, but our young protagonist also has other feelings towards his new friend.

George got his first on-screen role at the age of 12. He played Noah Morris in the series The Bill in 2009. George had appeared in theatre plays and made some big celebrity friends by the time he got his first experience in front of the camera. The young actor was only scratching the surface, and over the next decade, he appeared in various starring and supporting roles.

After 2009 George focused on other endeavors, like dancing and presenting, which took him away from acting. But the young actor came back in a major way when he was hired in a supporting capacity to appear in the Disney series The Evermoor Chronicles. The teen drama series was a huge success, with George appearing in over 20 episodes, playing Seb Crossley. Disney played a big hand in propelling the career of Goerge. The next big project of his career was in the historical drama Will, about William Shakespeare’s early life. George played Billy Cooper in the series and appeared in seven of the ten total episodes. He also appeared in the third season of the AMC series Into the Badlands.

Next, George Sear will be seen in the adaptation of the Alex Rider book series written by Anthony Horowitz. The book and the show are about a teenage spy who is tasked with saving the world. George plays Parker Roscoe in the highly anticipated series. Alex Rider is set for release on 4 June 2020, only on Amazon Prime.

The Sear Family is a Talented Bunch George Sear was one year old when his mother, Juliet Sear, started baking. Just doing it for fun turned into a profession, and baking led the mother of three to create her own recipes, writing books and running a successful cooking show on TV. Juliet Sear is one of the most famous bakers currently working in England.

Apple did not fall far from the tree as George went into acting, and his two sisters Ruby and Lydia went into fashion. Juliet’s two daughters appear on her Instagram page from time to time, baking with her. George and his sisters are making a career in show business, following in the path blazed by their mother.

George has close to 35,000 followers on his Instagram. There are few posts about the actor sharing his new project, but he also sheds a little light on his private life. George shows off his musical talents on his grid from time to time. Most of the pictures are dominated by traveling, having fun with friends, and times spent with his sisters and family.