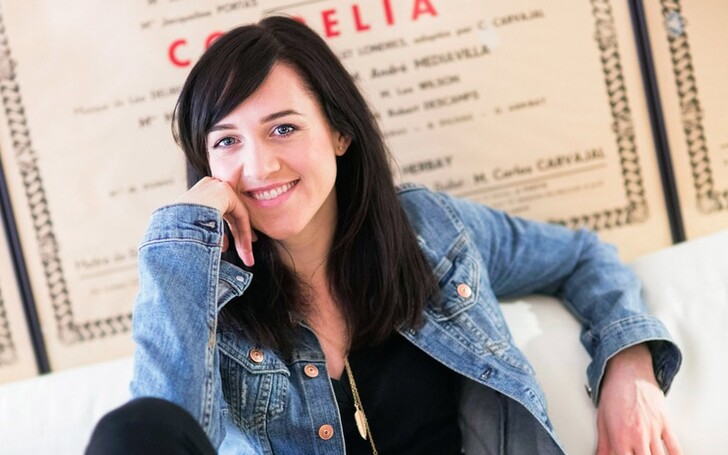 The actress graduated from Ruth Asawa San Francisco School of the Arts, where she was a dance student. Moreover, she’s an alumna of the Young People’s Teen Musical Theatre Company.

Lena Hall is married to her husband, Jonathan Stein Lena Hall is married to her fiance turned husband, Jonathan Stein since 2019. The couple stumbled across each other through a dating app that was suggested to Hall by her friend Josh Groban. They first met at the Bowery Hotel Lobby and kissed for the first time in Washington Square Park.

The lovebirds gradually fell for each other and eventually turned into a full-fledged couple. On Christmas Eve in 2018, the duo got engaged in the most romantic manner. Trendy Bride wrote:

On Christmas Eve in Bermuda, on a dock overlooking the sunset, Jonathan got down on one knee and proposed. It was the perfect place to pop the question as it was one of their most visited spots in Bermuda.

Jonathan presented Lena with a gorgeous three and a quarter carat vintage 1920’s diamond ring. Lena and Jonathan are planning on enjoying a long engagement and have yet to set a date for later next year.

Lena took to social media to break the delightful news to her fans.

~sound on~ Alone on a dock during sunset in @bermuda. He told me he wanted to take fancy pics to post on insta. The minute I realized what was happening I could barely stand! I am the luckiest girl alive. @jstein6583 #kisa 👻❤️🦄 #bestproposalever pic.twitter.com/bDTtkRmWtK

A few months later, the duo held an engagement ceremony where they looked absolutely gorgeous together. Check out the beautiful pictures here.

On 10th November 2019, Lena took to Instagram to express her love for her husband. She wrote:

Husband appreciation post!!! I am grateful I get to go through life’s ups and downs with this man. My heart swells when I hear his voice and my knees go weak when I look at him. He makes me laugh first thing in the morning and last thing at night. He fills my love bucket to overflowing and I have more to give than I know what to do with. @jstein you are my KISA! ?❤️? #husbandappreciationpost

FYI, Lena Hall looked like an absolute angel in these gowns for Wedding Chicks.

Meanwhile, the couple is yet to welcome children into their life. It remains to be seen if they decide to expand their family with kids anytime soon.

Lena Hall is starring as Sayori in 'Snowpiercer' (2019)

Snowpiercer is a post-apocalyptic dystopian thriller series based on the 2013 South Korean-Czech movie (starring Chris Evans) carrying the same title and adapted from a French graphic novel, Le Transperceneige (1982). The show airs on TNT in the first half of 2020.

As per Hollywood Reporter, Lena Hall is playing the role of Sayori.

Hall will star as Sayori, the train’s archivist who is responsible for maintaining the continuity, be it in the form of oral histories, meticulous written records or ensuring key roles necessary for its continuous travels are always filled. She is a crucial member of the Train’s upper management.

The plot is set seven years into the future after the world has turned into a frozen wasteland. The remaining humanity settles in a gigantic, perpetually moving train that circles the globe. The story raises questions relating to class warfare, social injustice and the politics of survival.

What is Lena Hall’s Net Worth? Lena Hall's net worth is estimated to be $4 million.
Source: Lena Hall Instagram

Lena Hall is most renowned for her Broadway performances, where she originated the character of Nikola in the musical Kinky Boots (2013). A year later, she won the Tony Award for her remarkable performance as Yitzhak in the rock musical Hedwig and the Angry Inch (2014). Impressively, this earned her a Grammy nomination for Best Musical Theatre Album.

During the national tour in 2016, the promising actress wrote her name in the history books, becoming the first person to play both Yitzhak and Hedwig.

When it comes to the big screens, the Snowpiercer actress featured in a romantic-comedy Sex and the City (2008). The same year she played the role of Inga in a comedy-of-age teen film The Graduates (2008). The following year, Lena portrayed the character of Barney in the movie Born from the Foot (2009) and Wife/Eve in a gay-themed musical comedy The Big Gay Musical (2009). Fast forward to 2017; the actress starred in a titular role in a musical drama Becks.

Coming to her small-screen credits, Hall featured in an ABC soap opera All My Children (2008). This was followed by her role as Juicy Lucy in Amazon Prime’s period drama web series Good Girls Revolt (2015) and Holly in an HBO comedy-drama Girls (2016). In addition, she played the voice role of Countess Coloratura in a children’s animated fantasy TV series My Little Pony: Friendship Is Magic (2015).

Besides her acting career, the Snowpiercer star served as the lead singer of the band The Defeaning. She, along with her crew, released an album titled Central Booking (2012) with original songs. Three years later, the singer released Sin & Salvation: Live At the Carlyle, her very first solo album.

Lena Hall’s net worth is estimated at $4 million.