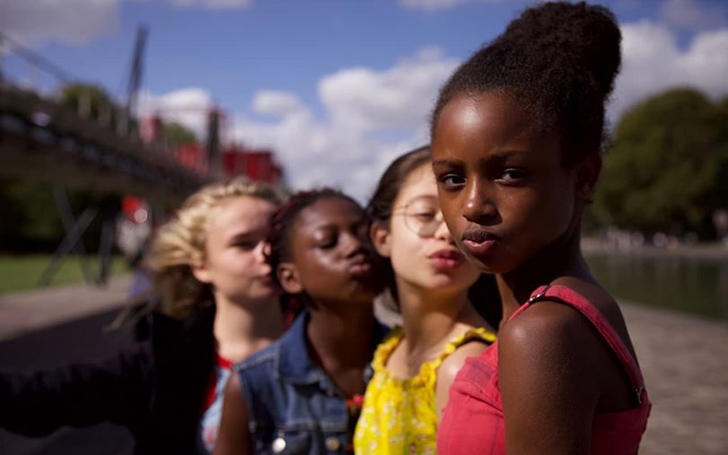 September was going to be just another month when it comes to Netflix releases. An original Netflix movie and few original shows but then controversy came fast and hard for the streaming platform. A new Netflix film from France was mired in pedophilia controversy, which has led people to inquire about Netflix Cuties cast age.

Featuring a cast with the current average age of 13, the four leading girls and the marketing campaign which sexualized them caused people to go after the film. People were angry with the way Netflix was marketing the movie and thought the film was exploiting kids.

Watch: The trailer for the Netflix movie Cuties

Well, let’s get one thing clear, Cuties is fighting against the exact thing it is accused of. The whole controversy is a case of the internet, forming an opinion before the whole thing comes out. We’ve seen the film, and though we would’ve loved to see less of those close-ups, there is a reason why the director decided to go the direction she did. Fathia Youssouf is a French actress who is playing the leading role in her debut film. She was selected from a pool of 650 kids the casting crew looked at before filming began. Fathia was 11 years old when she was hired to play the character, similar to Amy's age in the movie.

As for her age now, according to the actress’ Instagram page, she is 14 years old and lies on the older side of the leading cast members of Cuties. Her exact birthday is unclear, but you can find the age of Fathia in the bio of her Instagram page, which has close to 3,000 followers now. Medina El Aidi-Azouni is the girl with spectacles in the promotional material of the movies. She plays Angelica in the film, one of the girls of the dance troupe Amy is interested in joining. Angelica and Amy form a friendship, and she welcomes Amy into the group.

When it comes to Netflix Cuties cast age, Medina is the youngest of the four girls in the movie. According to reports, she is 12, turning 13 years old. Again there is not enough out about the four actresses to ascertain their exact age; we are going off reporting and Instagram page.

Esther Gohourou Plays Coumba in Cuties – She is 14 Years Old

According to Esther Gohourou’s Instagram, the actress is 14 years old. Like all of the girls in the film, Cuties is her debut film, and she plays Coumba in the movie. She is also involved with the dance troupe, and all four girls rebel together, as seen in the reintroduced poster for the Netflix movie.

Her Instagram account is private; you will need to follow her on the image sharing site to see what the talented actress is up to. Except for Fathia, all three girl’s Instagram accounts are private.

Ilanah Cami-Goursolas Plays Jess – Her Character is Pretty Out there

We scoured the internet for information about all four girls in the Cuties movie. Unlike American child actors, there is little source reporting on Europe's up and coming child performers. Ilanah Cami-Goursolas is probably the most talented of the four girls in the movie.

According to her Facebook profile, her age is 12-years-old, but that profile has not been used since June of 2018. So, we can guess that the actress is either 14 or 15 years of age. Her Facebook shows she has been interested in dancing from a young age. She is utilizing her skills in the film; it was probably one of the driving factors of her getting cast in the movie.

So, as mentioned above, Netflix Cuties cast age averages to about 13 years mark. Medina is the youngest, with the other three girls revolving around the 14 years line. The new French movie is currently streaming on Netflix, despite a large cry to stop its release.

Final note: Do not let the movie's controversy question whether to watch the film. Watch the film for yourself and decide which side of the spectrum you fall on, whether you consider the film criticism of child exploitation or the film became what it set out to stand against.