Actress Blythe Danner is the maternal half-sister of Katherine's father, which makes her the half-first cousin of Gwyneth Paltrow and her younger brother Jake Paltrow. When she was 18, Kate moved to New York City, where she attended the American Academy of Dramatic Arts.

Katherine Moennig is married to her wife Ana Rezende 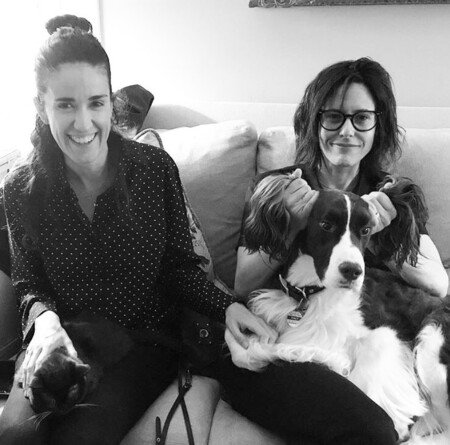 Katherine Moennig tied the knot with her musician girlfriend turned wife Ana Rezende in 2018. It’s not clear when the couple began dating, but they were in a relationship for a while prior to their wedding.

Speaking of her spouse, Moennig said:

I never really cared about getting married, to be honest. It never was important. It just happened organically. If I was to get married, it would to this one because it just makes sense. And it feels safe and it feels like I’m at home.

Previously, the actress was in a relationship with singer Holly Miranda (2008 - 2013) and singer/actress Amanda Moore. Moreover, she was rumored to be dating Evan Rachel Wood (2014) and Francesca Gregorini (2005).

During a podcast hosted by RuPaul and Michelle Visage called RuPaul: What’s The Tee with Michelle Visage, the Shane McCutcheon actress Kate Moennig spoke about the show The L Word that helped her come out in real life.

Halfway through the interview, the actress was asked if she always knew she was a lesbian. Katherine revealed she was raised as Catholic and went to Catholic school for 13 years. So, it was difficult for her to explore her orientation, especially during the ‘80s and ‘90s.

Now I believe if I was in high school now I would see it more. Back then you didn’t. That sh*t did not exist.

Apparently, Moennig did not really care about her sexual identity until she began filming the original series.

Oddly enough, when I got The L Word, that’s where my wheels started turning.

Kate also revealed she had dated men in the past. However, she only found them cute and appreciated their beauty, but she would often think to herself why she did not care about anything more. The actress added,

I didn’t know what that was. I didn’t have the vocabulary for it yet.

Moennig said working in the series alongside queer women in The L Word helped reshape her.

[It] was the first time I was in an environment when it was so welcomed and discussed. Everyone was open and proud and confident. I’d never seen that before. Never in my life. It’s why all those women are my family and will be till the day I die.

The actress went on to explain the common features between her on-screen character Shane and herself. She claimed there were more similarities in the initial series than the upcoming one.

Related: 'The L Word' Co-star Jennifer Beals is reprising her role in the reboot
Moennig believes she kind of blended with her character the first time around. However, she does not feel she is as destructive as Shane. Katherine added, she would have been able to answer the question much easier a decade earlier when she was doing the show and performing similar things to her in her own life. The actress concluded, “But now I feel like I’m settled. I’m married. I’m set up in life and she’s still not exactly.”

Katherine Moennig's Career - What is her Net Worth? Katherine Moennig is best known for playing the role of Shane McCutcheon in the drama series The L Word (2004-09), appearing in 70 episodes. Moreover, she portrayed the character of Jake Pratt on the drama series Young Americans (2000).

The actress is starring in one of the lead roles of Lena Burnham in the Showtime crime drama series Ray Donovan since 2013. Her other notable role includes a recurring character of Professor Paige Hewson in season 2 and 3 of the Freeform series Grownish. Likewise, Moennig made a brief cameo as Michael Angelo for a single episode in the crime drama series Dexter (2010).

Katherine Moennig’s net worth is estimated at $2.5 million.