The L Word: Generation Q star Stephanie Allynne was born on 19th September 1986 in Claremont, California, before moving to Buffalo, New York, later in her youth. At the age of 18, the aspiring actress shifted to Los Angeles and enrolled in the Upright Citizens Brigade, where she sharpened her improv abilities, subsequently performing in ASSSSCAT, Wild Horses, and Last Day of School: The Text Message show.

Stephanie Allynne is playing the role of Natalie “Nat” Bailey in ‘The L Word: Generation Q’

The L Word: Generation Q is a Showtime drama, the sequel to The L Word (2004-2009), premiering on 8th December 2019. The new show is set 10 years into the future following the events of its predecessor. Several past actors from the original series reprise their role along with a whole host of talented new actors.

Generation Q follows the adventures of a cast of friends, most of whom are lesbians. The series relocates to Silver Lake, Los Angeles, from the original setting of West Hollywood, California. Stephanie Allynne is married to her girlfriend turned wife Tig Notaro for over four years. The couple tied the knot on 24th October 2015 with a delightful wedding ceremony.

The lovebirds revealed during an interview they had a fair share of heartbreaks in their past relationships. Interestingly, both of them had never dated women prior to bumping into each other. The then-engaged Stephanie told Cosmopolitan in 2015, “I was so into Tig, and I was falling in love with her, and I didn’t know how to identify it because I thought I was straight.”

Notaro and Allynne first met on the set of a comedy film In a World… (2013). A couple of years later, the duo got engaged on 1st January 2015. The same year in October, the pair eventually tied the knot and embraced each other as life partners.

This wonderful couple welcomed a pair of twins named Finn Notaro and Max Notaro on 26th June 2016. The lovebirds conceived their kids via surrogacy through Alynne’s eggs. 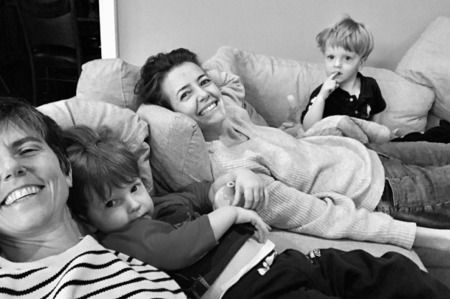 Speaking to the HuffPost Live in 2016, Notaro couldn’t be in more awe talking about her partner. The comedian said:

I think the one thing I haven’t had is a relationship that fulfilled me and made me excited about being with that person forever, and I have that now, for the first time in my life.

The comedian added, “That drives me to work on that and invest in that. I still want to live my life and pursue my career, but my personal life and my relationship, my family, it’s more important than ever.”

Stephanie Allynne’s partner Tig Notaro is a comedian and talk show host who was diagnosed with breast cancer in 2012.

Stephanie Allynne’s Career and Net Worth Allynne starred alongside her wife Tig Notaro in a comedy series One Mississippi (2016-17) as Kate, appearing for ten episodes. The show loosely depicted the couple’s real lives.

Stephanie’s got 71 acting credits to her name so far. When it comes to the big screens, the actress played the role of Nancy in a comedy film In a World… (2013), followed by the lead role as Joey Powell in a comedy series Dream Corp, LLC (2016). A year later, she portrayed the character as Soccer Mom for a couple of episodes in Twin Peaks (2017).

Stephanie Allynne’s net worth is estimated at $2 million.