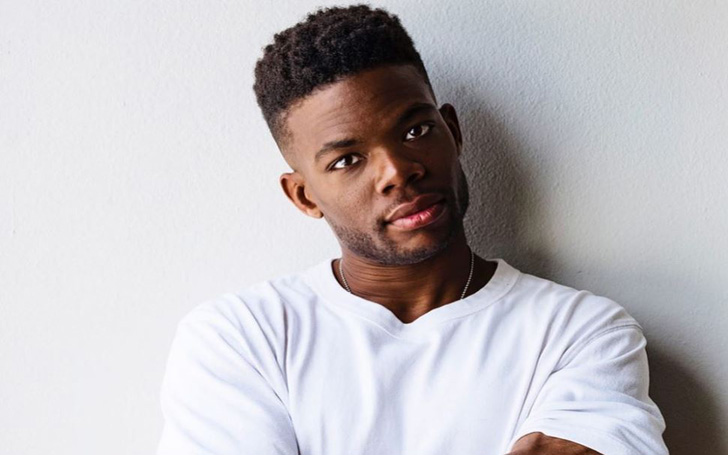 Paul James looks extremely young, but do not let his timeless look and amazing charm fool you into thinking he is a fresh-faced newbie to the world of acting. Paul’s been doing his thing and pushing his career forward for almost 16 years now. Paul James will now appear as the leading character of Sam in Soundtrack Netflix show.

Paul was born on 6 June, and he lived a little while of his formative years in Washington D.C., the place where he was born to his father (who is died a few years ago) and mother Josephine, who raised Paul in Maryland. His mother taught at Watkins Mill High School in Maryland and also raised Paul and his older sister Leslye Penelope. Paul James was raised by his mother and lived in Maryland with his elder sister.
Source: Paul James Instagram

From a young age, good moral values and need of respect were ingrained into the brain of Paul, who grew alongside his now award-winning fantasy author Leslye. Paul went to school in Maryland at Quince Orchard High School, and the building blocks of becoming an actor was being placed. Now, the actor is leading Soundtrack Netflix show, which is a massive deal for him because the potential is there for the show to be huge. After playing, minor to supporting roles in various movies and TV shows over the years, Paul is finally getting a chance to headline his own series. The talented actor is playing Sam in Soundtrack Netflix series, where he and Nellie O’Brien, played by the talented Callie Hernandez, fall in love in the streets when they bump into one another. Megan Ferguson is also in the show and plays the character of Gigi Dumont, a friend of Nellie, while Madeleine Stowe appears as Callie Hernandez's character's mother, Margot.

Do Not Forget: Soundtrack Netflix Season 2 – 4 Things We Want and 1 We Don’t If Soundtrack is Renewed for Season 2

Soundtrack Netflix series, as the name suggests, is about the soundtrack and not the one which plays in the background of movies and TV shows, and instead, here, the soundtrack is the way we learn about the characters and what they are feeling. Also, the actors are not going to sing popular songs like Glee; the show will incorporate lip-syncing of popular songs.

Watch: The trailer for the upcoming series Soundtrack on Netflix

The creator of the show Joshua Safran set out to make the show not by creating characters at first, but listening to music and letting the songs dictate the way his characters are going to be, and the plot is going to move. Safran said the song Between Me and You by Brandon Flowers was the inspiration behind the creation of Sam.

Recommended for You: Paul James From Soundtrack Talks About His Experience on the Show and a Possible Soundtrack Season 2

Sam is a single father, working multiple jobs to pay the bills and stay afloat so he can provide a good life for his one child. But one day on the street he meets Nellie, someone who raises the hair at the back of his neck and makes him feel she is the one for him and the story for Soundtrack Netflix show goes on from there. The amazing actor Jahmil French is also appearing in the show and plays the character of Dante Mendoza. Also, Juliet Gordy is playing Dante's little sister Leah on the show.

You can watch all the episodes of Soundtrack on Netflix from 18 December onwards, do not miss out, it is going to be epic.

Paul James started acting pretty young, at about the end of his teen years and after finishing school. The Deerings was his first job in show business, and soon, he was playing minor roles in movies and TV shows. But his big break came about three years after he started acting, in 2007 Paul was hired to play the character of Calvin Owens in the show Greek.

Paul played the character of Calvin Owens in the show Greek, where Calvin was a gay man living in a fraternity house. His appearance in the show and the portrayal of the character of Calvin was also lauded for the way a gay person was portrayed in a positive light. The actor got a lot of attention for the role, and it subsequently led to other lucrative projects for Paul.

The Calvin actor was soon appearing in various TV shows in a limited capacity and finally got the role of O’Connor in the hit TNT show The Last Ship, his character lasted for 22 episodes from 2014 to 2017. Paul was also promoted to be the main cast of the show The Path in the second season, and now he is playing Sam in Soundtrack Netflix show.

Paul James Relationship Status – Does Paul Have a Special Someone? Paul James is not currently romantically involved with anyone.
Source: Instagram

The actor did play a gay character in the show Greek which may cause some people to question whether he is gay, but there is nothing out there stating his sexuality. Almost everything relating to the actor’s personal life is a mystery, no mention of a girlfriend even on his Instagram page.

What is Paul James Net Worth? Paul James made his fortune from his appearances in various movies and TV shows.
Source: Instagram

For almost the entirety of his career, Paul James played backup or side roles where his character was there for a couple of scenes and never to be seen again. In that sense, he is a struggling actor, but Paul also played main roles in a few movies and TV shows, which paid good money for the actor to live off.

Greek was an ABC show, and it was a critical and ratings success, so surely he was paid handsomely for his appearance in the show. We are thinking somewhere in the range of $15,000 to $20,000 per episode. Now, the actor appears in Soundtrack Netflix show, and the streaming giant is known for being loose with their purse. The show was expensive to make because of all the songs they needed to clear, and the actors were probably paid accordingly as well. So, when we consider it all, the net worth of Paul James should be somewhere around the $500,000 mark.