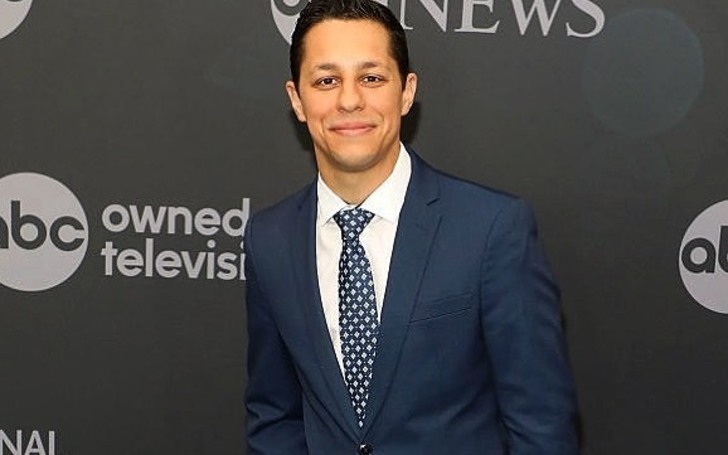 David Del Rio was born on 29th September 1987, in Miami, Florida. He went to the New World School of Arts in his hometown, graduating in 2006. Later, he enrolled in and completed graduation from the New York Conservatory for Dramatic Arts, School of Film and Television.

Based on the Israeli romantic-comedy series Beauty and the Baker by Assi Azar, The Baker and the Beauty is an American romantic musical-comedy on ABC developed by Dean Georgaris. The Israeli version is regarded as one of the greatest scripted shows in the nation's television history.

Showrunner Dean Georgaris shed light on the major differences between the two versions.

As per IMDb, the premise for The Baker and the Beauty reads:

David Del Rio is playing the role of Mateo Garcia on ABC's The Baker and the Beauty. The younger brother of Daniel (Victor Rasuk), Mateo is an aspiring DJ known as MC Cubano. David Del Rio portrays the character of Mateo Garcia in the ABC dramedy The Baker and the Beauty.
Source: David Del Rio Instagram

The Baker and the Beauty series is set in Miami and predominantly features Latino stars. The rest of the main cast includes Nathalie Kelley as Noa Hamilton, Dan Bucatinsky as Lewis, Michelle Veintimilla as Vanessa, Belissa Escobedo as Natalie, Lisa Vidal as Mari Garcia, and Carlos Gomez as Rafael Garcia. In addition, Georgina Reilly makes guest appearances as Piper. The Beginning of their Love Story Back in March 2010, Katie Wallace couldn't get more delighted after securing the tickets to one of the hottest Broadway shows at the time called In the Heights.

The sophomore at New York University's Tisch School of the Arts scored the front-row seats for her siblings and parents at the Richard Rodgers Theatre, and for her, it felt like she had won a lottery. Little did she know, she would end up falling in love with one of the show's stars David Del Rio.

Katie, who kept talking about his performance throughout intermission and even drew a heart next to his name, said:

I kept tapping my mother’s shoulder, throughout the entire show, whispering, ‘Watch that guy! He has great moments!

Despite being initially shy to take a picture with David at the stage door, the moment she saw him walk out, she was star-struck and ended up capturing a photo and a hug. Katie recalled, "I tried to keep it cool and casual, in case I ever ran into him again in New York, but I never did." David Del Rio and Katie Wallace stumbled across each other at a birthday party.
Source: Wallace Instagram

Three years later, and call it fate, both David and Katie moved to Los Angeles at the same time, the former carrying hopes of landing a breakthrough acting role. They bumped into each other once again, this time at the birthday party of the Spy Kids star Daryl Sabara.

David approached Katie hoping to set her up with one of his friends, but it quickly fizzled away. The actor said,

We had a really strong connection and really enjoyed each other’s conversation. Just like in acting, there’s a right time, a right place — and a right person.

Meanwhile, Katie pretended she was not familiar with Del Rio and kept her former fandom under wraps to not scare him off. Katie said, "I walked right up to him — a little liquid courage goes a long way — and asked what show he was in."

David Asks Katie to be His Girlfriend The following day, David texted Katie, hinting on his romantic interest; however, Katie was returning home to look after her cancer-stricken father at the time. Nevertheless, the pair continued to communicate over texts, and their affection grew further as they shared each other's passions and interests.

Sometime later, David asked her out on a date the same day she landed back in LA. Later in the evening, they went to his friend's house, where she got introduced to his cousin, brother, and best friends. David knew that very moment she's the one for him.

Three weeks later, David and Katie officially got into a relationship. The new couple began dating and couldn't get enough of each other.

Six months into their relationship, David received the most pleasant surprise from his girlfriend on his 26th birthday. She showed him the photo taken at the backstage door four years earlier at the Richard Rodgers Theatre. David, as expected, was blown away.

It was the best birthday surprise gift ever. I had no idea.

The actor continued, "The truth is, I've always known that we were going to be together, from the very beginning. I approached her first, I fell in love with her first and I asked her to be mine first. I'm an even bigger fan of hers." The couple moved in together in 2016 and got closer than ever. The following year in March 2017, David surprised Katie with tickets to New York to watch friend actor Jordan Fisher in Hamilton.

The next day, David convinced Katie they were set to meet his mother for lunch. However, he had something else in store. The actor brought Katie to the stage door of the Richard Rodgers Theatre and proposed.

Watch: Teen Who Fangirled Over Actor Gets Engaged To Him Years Later

David got down on his knee and asked,

Would you make me the happiest man on Earth by being with me forever as my wife?

The Beautiful Wedding in Mexico David recalled the moment and joked:

You know we’re both actors when our [agents] gave us a hard time about our wedding because it fell right before the pilot season.

Meanwhile, Katie walked down the aisle accompanied by her father, while David couldn't help himself get misty-eyed. By the time Katie's paternal uncle, who served as an officiant, announced their kiss, David was unable to hold it anymore and tears began rolling down his face.

Later, the newlyweds shared their first dance to James Arthur's Say You Won't Let Go, which culminated in a beachside fireworks display. The groomsmen then surprised guests with a choreographed dance to Bruno Mars' Perm.

David did not want to feel left out, so he hopped in and joined the dancing party, showcasing his boy-band moves to Backstreet Boys' Everybody.

Katie couldn't contain her laughter watching her man flaunt all those moves. "I watched him with pride, and not as a fan, but as my husband," said Katie. Meanwhile, David's feeling was mutual. "I had never felt so determined and sure of something until the day I met Katie."

Featured on 'Pitch Perfect,' 'Geek Charming,' and 'Spare Parts' - What's His Net Worth? David Del Rio's net worth is estimated to be $200,000.
Source: Del Rio Instagram

David Del Rio made his acting debut with the role of Freddie Ramirez in an American crime-drama Law & Order: Special Victims Unit. The following year, he enjoyed his first breakthrough after landing the role of Felix on Nickelodeon's comedy series The Troop (2009-11).

In 2011, the actor starred as Ari on Disney Channel's original movie Geek Charming, followed by the portrayal of Kolio in a musical comedy film Pitch Perfect (2012), alongside Anna Kendrick, Skylar Astin, and Rebel Wilson. Three years later, Del Rio had a recurring role as Ian in a comedy series Resident Advisors (2015) while he starred in a TV movie The Half of It (2015) as Geoffrey. In addition, he featured as Cristian Arcega in a drama film Spare Parts (2015).

Watch: David Del Rio on Dating his "Fans" and Crowdfunding His New Short | The Zoo

The Baker and the Beauty star most recently made a single-episode appearance as Diamond on Movie Trivia Showdown (2019), followed by the role of Dustin on Search and Destroy (2019).